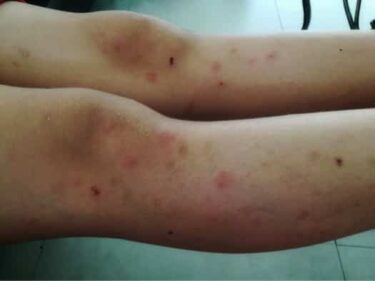 If you’ve ever experienced a bed bug infestation, you might have noticed a peculiar pattern to their bites. Bed bug bites appear on the skin in lines or clusters. The pattern of their bites is often nicknamed “breakfast, lunch, and dinner.”

Bed bugs don’t always bite in straight lines. Each bed bug will only feed once per night. However, they may become dislodged mid-feed, or be unable to find a good blood vessel and so will un-latch and bite in a different spot. This is why you might find bites in lines or small groups. Other time, you may find individual bites.

We’re going to look at how why bed bugs bite their host. We’ll discuss how their mouthparts work and why bites always seem to appear in groups or clusters. We’ll also find out what kind of bugs bite in a line other than bed bugs.

Why Do Bed Bugs Bite Humans?

Before we get into the mechanics of bed bug bites, let’s briefly look at why bed bugs need to bite us in the first place.

Bed bugs have lived alongside humans for thousands of years, drinking our blood while we sleep. After all, it’s a great source of nutrition for a tiny insect. Blood is full of fat, protein, and sugar, and is readily available anywhere that mammals can be found.

When humans started living in caves, however, some bat bugs decided they preferred to feed on humans. We don’t move around as much while we sleep, and we aren’t insectivores.

Over the years, bed bugs have become adapted to living with and feeding on humans. They thrive at room temperature (70 to 80 degrees Fahrenheit) and are small enough to penetrate the tiny crevices of our homes. Their mouthparts are perfectly designed for piercing human skin and drinking from our blood vessels.

In fact, bed bugs literally can’t consume or digest any substance other than blood. If they stopped biting us, they’d die. And unfortunately for us, bed bugs are determined to live.

How Do Bed Bugs Bite Humans?

So now that we know why bed bugs bite humans, let’s look into how they do it. When you wake up with those irritating, itchy bite marks, what has happened?

The first step is for the bed bug to seek out a human host to bite.

Usually, bed bugs will live somewhere that is close to humans, such as in a mattress or box spring.

When we’re nearby, bed bugs can always tell: they can detect the carbon dioxide, body heat and other chemical signals that humans give off.

Once a bed bug detects a human, they’ll follow the trail until they come into contact with us. Bed bugs usually wait until the middle of the night, when there’s a strong chance that we’ll be asleep.

Find an Unprotected Area of Skin

The second step is to find an area of our skin that is unprotected by clothing.

Bed bugs do not have the mouthparts necessary to bite or chew through thick clothing; the most they can penetrate is thin mesh fabric, like tulle. So, a bed bug will crawl around until they find an exposed area to bite.

As they’re so small, they can easily fit underneath the openings in our pajamas, such as the leg and arm holes.

Once a suitable area of skin has been found, the bed bug will pierce the skin with its specialized beak-like mouth part.

As it bites, the bed bug’s saliva will make contact with the wound. Bed bug saliva contains two main components, according to Clinical Infectious Diseases:

It usually takes around 10 minutes for a bed bug to fill up completely once it has started to feed.

The bed bug will try to drink its entire fill from the same blood vessel. However, sometimes, this isn’t possible for one reason or another.

If a bed bug has to prematurely detach itself from the site that it was feeding on, it will bite another area of skin. This could be nearby to the first bite, or some distance away from it.

Eventually, your skin will develop a reaction to the bed bug’s bite. This could be the following day or several days later, depending on your immune system. You’ll notice a swollen red lump, which might sting or itch.

Do Bed Bugs Always Bite in a Row?

People who are dealing with bed bug infestations often report that bed bug bites occur in lines, rows or clusters. Is this accurate?

The stereotypical “three bites in a line” idea, often nicknamed “breakfast, lunch, and dinner,” is largely false. It is a myth that each bed bug bites three times in one night. As we’ve discussed, if a bed bug can drink its fill from one bite, it will do so.

However, in some cases, you will experience three (or more) bed bug bites in a row, line, or group. There are three main reasons why this might happen:

While a line or group of bed bug bites is not rare, it’s not necessarily the standard. Singular bites are just as common.

What Kind of Bug Bites in a Line (Other Than Bed Bugs)?

If you’ve found a line of bites on your body, don’t panic. It might not necessarily indicate that you have bed bugs. There are different bugs and parasites that bite humans, so it could be anything.

The first step is to check your home for the telltale signs of bed bugs. Be on the lookout for live bugs, dark spots (bed bug feces) and shed bed bug casings.

If you don’t find any of the above, you may have been bitten by something different altogether. Here are the most common culprits of bites that look like bed bug bites.

There are many kinds of flies that bite humans. For example:

Fly bites are most common in warmer weather. You’re more at risk of being bitten by flies if you spend time outdoors, or if you don’t have screens covering your windows and doors.

Usually, fly bite marks appear a few minutes after the insect has bitten you, rather than several days in the case of bed bugs. They start off as whitish-red, puffy bumps, and turn into dark red-brown bumps after a day or so.

In general, flies don’t bite in lines. However, the bites may appear in a line as a coincidence, particularly if multiple flies have bitten you in the same area.

If you have a flea or lice infestation, you’ll probably know it. Fleas live in amongst the fur of cats and dogs, though they can bite humans if the opportunity arises. Watch out for your pet scratching and biting itself, as well as dark brown “dirt” in your pet’s fur (flea feces).

Lice, on the other hand, live on human skin. Head lice live on the head, and body lice live amongst the body hair. It’s possible for both lice and fleas to bite in lines or groups.

If you’re being bitten by lice, you’ll be able to see the lice themselves with close examination. They are much smaller than bed bugs.

Scabies is a skin infection caused by the scabies mite, which is a kind of arachnid. They are so small that they can’t be seen with the naked eye.

When you become infected with scabies, the mites burrow under your skin. Bed bugs don’t lay eggs underneath the skin. This can leave small, red, intensely itchy bumps that often occur in lines or clusters. You may be able to see the tunnels dug underneath the skin, in some cases.

If you are unsure of the source of your bite marks, visit a dermatologist for an examination. If you still want to be on the safe side, call in an exterminator to check your home, too. You’ll soon find out what’s been eating you.