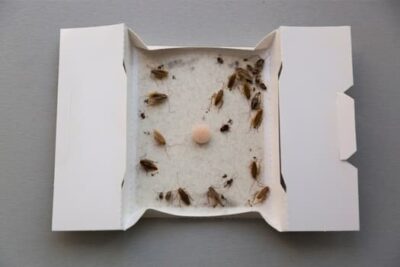 Traps are a solution for parasitic pests on your property. The idea of using traps to catch bed bugs is the first that most people have. But whether using them is a good idea is open to debate.

Bed bug traps do catch lots of bed bugs. Those that are caught can’t bite you, but the traps don’t catch bed bugs in your mattress. They also can’t catch tropical bed bugs because they can climb out of regular traps. Traps should only be used as part of a wider treatment plan.

The reason they’re not very effective is that most bed bugs live in the mattress. There’s nowhere to put a trap that can catch bed bugs in your mattress. Let’s take a look at their effectiveness.

Bed bug traps work well, although they do have their drawbacks. Any exterminator will tell you that they’re perfect for monitoring an infestation, but not as a long-term solution. You should consider using them, but not exclusively. Here’s a table of their pros and cons:

As you can see, bed bug traps achieve mixed results. But all of those drawbacks would be forgiven if they work, and help prevent infestations.

Bed bug traps don’t always work. Interceptor or ‘pitfall’ traps have been studied extensively. This has been the case ever since bed bugs made their first resurgence.

One paper on the topic looked at whether they trap different bed bug species equally well. The paper, entitled Differences in Climbing Ability of Cimex lectularius and Cimex hemipterus, was published in the Journal of Economic Entomology.

The scientists looked at the two bed bug species in the U.S. These species are the common bed bug and the tropical bed bug. They found that:

Tropical bed bugs were only recently introduced to the U.S. They first arrived in southern states like Florida. However, they’ve since been spreading across the country.

It’s practically impossible to tell the difference between the species with the naked eye.

If you were to rely solely on traps, then you may still get bites anyway. And that’s aside from the fact that bed bugs in your mattress don’t have to walk through the traps. They have direct access to you. So don’t use traps on their own. You can spray mattresses as it’s a contact killer.

If they’re set up correctly, traps start working as soon as the bed bugs in your infestation get hungry.

The hungrier your bed bugs get, the braver they’ll be, and the more likely that they’ll try and climb up through the trap to get you.

As for how long it will take to get rid of your infestation, that depends on the size of it. If you have a large infestation that’s spread around the room, then traps will only get rid of them bit by bit. You’ll still have bed bugs for weeks.

Interceptor traps are small and made of plastic. They fit around the feet of your bed. The idea is that any bed bug trying to get to you from across the room won’t be able to.

What stops the bugs from being able to climb out is the design of the trap. Bed bug interceptors have an outer wall and an inner wall, with the area between acting as a well. The plastic of the outside wall is a material they can climb up, but the inner wall is not.

Unless you get a trap you fill with water, the traps don’t kill your bed bugs. You’ll have to empty them and kill the bed bugs yourself. How you choose to do that is up to you. As for whether you should buy them, here’s a summary of their positives and drawbacks.

Lures give off pheromone attractants. Since bed bugs search for their host through sniffing out their pheromones, the lure confuses them. They seek out the lure rather than the person, and end up stuck inside.

Lures come in different shapes and sizes. Some have glue inside, so that the bed bugs can’t get out. Others are a plastic construction similar to the interceptor traps described above.

Some are designed only to check whether you have bed bugs, not to be a long-term solution. These lures are marketed towards people staying in hotels, for example, that want to test quickly for bed bugs. Pros and cons of lures include:

Glue traps are precisely what you think they are. They usually sit in the same place as a passive monitor, i.e., around the feet of your bed. The idea is that bed bugs will have to walk over them. If they don’t, they’ll starve.

Again, these traps are made both to monitor and to trap. The point of a monitor is to check whether you have bed bugs. They’re best used if you know you have one or two bed bugs. Or, they’re good for when you’re traveling.

If you want to tackle your infestation, buy proper traps, not just monitors. Glue traps aren’t the best choice for trapping. If you have a big infestation, they quickly get covered.

Interceptor devices are very easy to make for yourself. The ones you can buy are just small plastic things, after all. You could make a DIY bed bug trap using any a small plastic tub, like the kind you get food in. A Tupperware tub would work fine.

You could also use a regular cup. Plastic and metal would be best, since they wouldn’t be able to climb out. Make sure that the surface outside is climbable, e.g., by wrapping it securely in the fabric.

To prevent the interceptors from breaking, place a tile or similar hard layer underneath them. The weight of a bed is heavy enough to break a cup, for example. That’s why it’s best to use plastic or metal, especially if the cup/tub is disposable.

Bed bugs are attracted to a few things. The three known lures are body heat, carbon dioxide and the smell of human skin. The easiest of these to recreate at home, and thereby lure bed bugs, is CO2.

You need to start with something like an interceptor device. One particularly clever idea is to use an upside-down dog bowl. This method was invented by Dr. Changlu Wang of Rutgers University.

If you’ve ever looked at the underside of a dog bowl, you’d see that it has a rim. There is a well just inside it, and then a plateau which is the bottom of the bowl.

This is the same as an interceptor device, only you can’t put it around the foot of your bed. But that doesn’t matter, since we’re making a lure, not an interceptor. Here’s how it works:

This method is entirely safe. It doesn’t create anywhere near the levels of CO2 that are required for it to be harmful. It’s roughly the equivalent of having two other people in the room with you, both breathing.

How to Trap Bed Bugs with Tape

There are two ways to trap bed bugs with tape. The first is to use double-sided tape, and the second is to use regular tape. Both can be effective.

Do Bed Bugs Stick to Tape?

Bed bugs can stick to the tape, although they will typically avoid walking over it. Most insects have an in-built capability to search out the quickest and easiest way they can take to their destination.

If they encounter tape on their travels, they’ll turn back and try a different way. However, if they are desperate enough, then they might try walking across the tape.

As for whether they’ll stick to the tape, the jury’s out. Some bed bugs get trapped, whereas others manage to peel themselves off. If you do try it, don’t be surprised if it doesn’t work as well as you might hope.

The fact that bed bugs don’t stick to tape actually doesn’t matter all that much. That’s because bed bugs struggle to climb the smooth side of the tape, too.

This hasn’t been studied extensively, not by real scientists anyway. There are plenty of videos online that demonstrate how bed bugs struggle to climb smooth surfaces.

The problem is that they can’t get any good footholds to pull themselves up. Metal and wood bed frames usually have ridges, pits, and dents that bed bugs can use to climb. But plastic tape is entirely smooth.

If you want to stop bed bugs reaching you with tape, it’s easy. Here’s how, step by step:

If you’d like to trap the bed bugs in an interceptor using tape, there’s not much point. Just use one that you bought as directed rather than trying to make it any better with tape.

Should You Use Tape to Trap Bed Bugs?

Bed bugs will do almost anything to avoid walking over the tape. If you get the chance, you can experiment with one and see for yourself. If they can find a way around it, they will.

Repelling bed bugs encourages them to spread. If a bed bug can’t find its way to you, then it’ll try living somewhere else. It might head to the living room couch, or into your wardrobe.

Rather than using tape, you should use a lure or interceptor. These don’t deter bed bugs from trying to reach you, they stop them from being able to.

Should You Use Traps to Catch Bed Bugs?

There are two problems with traps. The first is that they encourage bed bugs to find a way around them. If there are traps around the feet of your bed, then bed bugs will try to:

Bed bugs are a lot smarter than most people give them credit for. They can figure out ways around traps that you may not have even dreamed of. And as we pointed out above, tropical bed bugs can sometimes climb out of traps anyway.

To be clear, using traps is a good idea, but only in conjunction with other control methods. Laundering and drying, pesticides, and natural sprays are all effective ways to kill bed bugs. But for monitoring infestations and preventing them before they get too bad, traps are a good option.