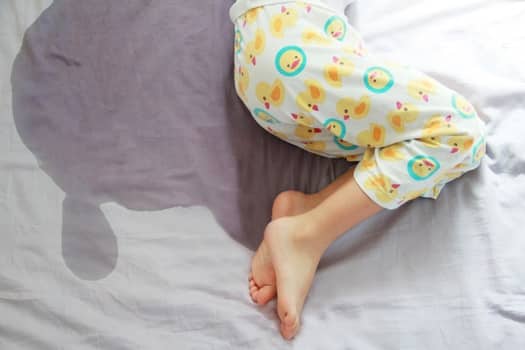 Wetting the bed is an embarrassing problem that’s experienced by children and older adults alike. But, if urine attracts bed bugs, then this potentially creates a new and more troubling issue.

No scientific studies have proven that human urine attracts bed bugs. They are attracted to heat, carbon dioxide, and human hormones. There is a hormone (histamine) excreted in urine, so if bed bugs are attracted to it, that would be why. However, they aren’t simply attracted to urine because it’s ‘dirty.’

It’s a misconception that bed bugs are attracted to unclean homes, but it sounds relatively plausible to the uninitiated. The hormone histamine is present in urine, and it’s this that may confuse the bed bugs as they use it to identify other bed bugs.

Does Wetting the Bed Cause Bed Bugs?

Bed bugs are attracted to various things. They’re attracted to heat. The warmth that humans give off at night is one of the easiest ways for them to recognize that a host is present.

They also detect the carbon dioxide that humans breathe out. Elevated CO2 levels let them know where we are. This helps them find where we sleep, so that they can stay close and feed at night.

Bed bugs are also attracted to the natural scent of skin. We give off this scent all the time, and animals can pick up on it to locate us.

So what about urine and bed bugs? What might attract bed bugs to urine?

So, warmth and CO2 are out as potential attractants, but histamine and other hormones are in. Bed bugs use histamines to find their harborage. That’s why studies show histamine levels to be far higher in infested homes than clean ones.

According to PLoS One, histamine levels are ‘remarkably high’ in infested houses. While the study did have a significant margin of error, there was between ten and thirty times the amount of histamine in bed bug infested homes.

This paper didn’t examine whether the histamine in urine can attract bed bugs, but it’s possible.

Are Bed Bugs Attracted to Water?

Bed bugs don’t drink. They don’t need to drink water, or anything else, because they get all their moisture from their food. In an optimal environment, bed bugs feed once every three days or so. Since blood is liquid, that satisfies their need to drink.

Bed bugs are further protected from dehydration because of their exoskeleton. Their shell is covered in a waxy substance that stops their internal moisture from evaporating. It’s crucial to their survival, because, without it, they quickly dry out and die.

Even if they did need to drink, urine in a mattress wouldn’t give them much opportunity to do so. It soaks into the mattress quickly. And because it contains many waste products, it may not be suitable for their consumption anyway.

Myths About What Attracts Bed Bugs

There are various myths regarding bed bugs and what they’re attracted to. The main misconception is that bed bugs are lured in by messy, dirty homes. The idea that bed bugs prefer dirty areas over clean ones is untrue.

There is a grain of truth to the idea, in that bed bugs enjoy clutter. The more clutter, the more places they have to hide. But bed bugs don’t sniff out and eat crumbs, or feed on dust or grease. All they eat is blood, so there’s no reason for them to be attracted to dirt.

The idea that bed bugs are attracted to urine comes from this myth. If bed bugs were attracted to things we think of as dirty, then a mattress that smells of urine would fit the bill. But they don’t prefer dirt, so a clean mattress is just as good as a soiled one.

What’s the Danger of Urine in a Mattress?

Aside from the issue of bed bugs, a soiled mattress isn’t dangerous. It will smell. But it’s unlikely to attract pests. There are no clear health issues either.

Of course, it will make your night’s sleep much less restful. To counteract that, you could:

If the mattress is severely soiled, purchase a new one and fit a mattress protector immediately. This will prevent any future slip-ups from staining the mattress. Fit a mattress encasement at the same time to prevent bed bugs from infesting it.

What Bugs Are Attracted to Urine?

Ants are supposedly attracted to urine. The idea is that ants like sugar, so if there’s any sugar in your urine, then they’ll be attracted to that. People with excess sugars in their urine typically have diabetes.

While this isn’t a sure-fire way to diagnose a medical condition, there is some truth to the idea. A person with diabetes can’t properly process glucose, and so they excrete it in their urine. Because ants are attracted to sugars, the urine might prove attractive to them.

However, it should be noted that it isn’t the urine that attracts them. It’s the sugar. So, aside from ants, are there any other pests attracted to urine?

Are Flies Attracted to Urine?

According to the Journal of Economic Entomology, fruit flies may be attracted to human urine. The study sought to find out whether urine and feces could be used to attract pollinators to crops. Human urine and chicken feces were used, since these are readily available on farms.

The scientists found that urine does have some fly-luring capabilities. It even worked for days on end without becoming any less attractive, unlike chemical compounds used for the same purpose.

Are Cockroaches Attracted to Urine?

Cockroaches are attracted to smells that they associate with food. Crumbs on a countertop, for example, lure them in. If you were to get food around your bed, then they might seek that out.

They’re also attracted to water. That’s why you’ll often find them underneath a sink, or in dank, damp houses. This means that they may be attracted to urine. With cockroaches, at least, there’s no chance of them biting you while you sleep.

Bed bugs aren’t attracted to similar things. They don’t need to eat anything but blood, and don’t drink pure water. If you want to avoid bed bugs, there are things you can do:

These methods work whether or not urine attracts bed bugs. So, you should begin using them today.