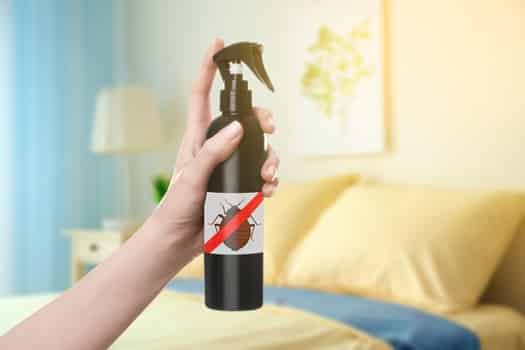 Scientists have worked for decades to invent new pesticides. There’s a lot of money to be made in finding a treatment that kills bed bugs. A pesticide used in many bed bug sprays is permethrin.

Although bed bugs are becoming immune to permethrin, it is still effective. You can find it in on the list of ingredients for almost any bed bug spray. We will explain what permethrin is, whether it’s the strongest bed bug killer on the market, and how to use permethrin spray for best results.

What is Permethrin for Bed Bugs?

Permethrin is a synthetic pesticide known as a ‘broad spectrum’ insecticide. This means that it can be used to kill a broad variety of insect parasites, like bed bugs. It works on contact or through ingestion. Permethrin is used in a variety of settings. It is used:

Permethrin is a known bed bug killer. There are three ways that it’s used. The first is in handheld pesticide sprays. These can be bought online or from reputable retailers. They are highly effective, but take time to work.

The second way that permethrins are used is in pest controllers’ sprays. These are even more effective as the pest controller has tools that spread it into hidden cracks. Again, though, it takes time to work.

It can also be applied as a cream or lotion. Permethrin cream isn’t prescribed for bed bugs, but scabies.

Permethrin is a synthetic pesticide. That means scientists invented it. It was first discovered in 1973 and has been used to kill bugs ever since.

Permethrin is part of a class of chemicals called pyrethroids. These are chemical compounds that were created to simulate pyrethrins, which are a natural product of some chrysanthemums. Pyrethrins are toxic. The idea was to create chemicals that can be made to an industrial scale.

Permethrin has a similar chemical structure to natural pyrethroids.

How Does Permethrin Kill Bed Bugs?

Permethrin spray works on direct contact. But the mechanism by which they work is more complicated than that. Permethrin and other pyrethroids are ‘axonic excitotoxins.’

They make their way through the bloodstream towards the bug’s axons, i.e., their nerves. They then penetrate through the membrane gate at the end of each nerve. In doing so, they leave the gate stuck open.

This means that they stop the bug’s nervous system from operating as normal. The bugs become paralyzed and die. This doesn’t take long to occur—only minutes, beginning upon contact.

Bed bugs don’t ingest anything but blood, so permethrin doesn’t kill them through ingestion. It can kill other bugs this way, e.g., cockroaches. However, it works on contact and through absorption through their shell. This is just as effective.

How Long Does Permethrin Take to Work?

Permethrin works within minutes. Bed bugs are tiny, so it doesn’t take long for the permethrin to reach their nervous system.

There is one big problem with permethrin and other pesticides. They can only kill bed bugs on contact. But bed bugs are excellent at hiding. This means that they can hide from the spray.

Permethrin residue will still kill bed bugs. It is still active for a month or two after it’s sprayed. But bed bugs will avoid anything they perceive to be toxic. There is evidence that they do this with permethrin.

It will continue to be effective for two months. But there will still be bed bugs infesting your house during this time. Even at the end of the period, there’s no guarantee they will all be dead.

Permethrin is one of the strongest bed bug killers. Most of the other insecticides used to kill bed bugs are pyrethroids like permethrin. There isn’t much difference between them.

However, permethrin and other insecticides aren’t as effective as heat treatment for bed bugs. Heat treatment is where you heat an area to a temperature that will kill an insect. For bed bugs, that temperature is 122 degrees or higher.

Heat treatment is more effective because it penetrates through furniture and belongings. Pesticides cannot.

If you want to get rid of bed bugs, using permethrin spray is a good place to start. Doing so is easy.

Each can that you buy will come with instructions on how to use it. The following guide is how you should exterminate bed bugs, from start to finish:

After spraying, open a window to air out the room. This won’t make the spray any less effective. But it will prevent the permethrin from hanging in the air where you can breathe it.

One spray is enough. It will then be effective for between one and two months. If there are still bed bugs at the end of this period, you can use the spray again.

If the instructions on the can are different from those here, follow those that came with the spray. You should always follow the manufacturer’s advice, above all.

Despite being one of the most effective bed bug pesticides, permethrin isn’t perfect. There is growing evidence that bed bugs are becoming immune to it.

There are two ways that this occurs. The first is through learning to avoid it. The second is through developing physical resistance. Let’s look at how each method of resistance works.

Does Permethrin Keep Bed Bugs Away?

On the surface, it may seem that a bed bug repellent is a good idea. It’s anything but. Bed bug repellents encourage bed bugs to spread throughout your home, not just in your mattress. And no repellent is strong enough to stop them biting.

This is called the avoidance response. According to a paper in Parasites & Vectors, this has been observed in different insects, including bed bugs. Here’s how it works:

This happened with cockroaches. They were initially trapped and killed using glucose bait. But over time it became less effective because of natural selection.

Both responses have been observed in response to toxins similar to permethrin.

Are Bed Bugs Resistant to Pesticide?

The second way of developing resistance is through physical, biological means. This is where the bug’s body develops to prevent the toxic substance harming them. This is occurring right now with bed bugs.

According to the journal PLoS One, bed bugs’ shells are becoming thicker. They state that this is a ‘well-recognized phenomenon’ in insects that are treated with pesticides.

In their study, they looked at whether having a thicker shell was related to pesticide resistance. They found that shell thickness was positively correlated to the time it took for the bug to be paralyzed.

Despite gaining some resistance, that doesn’t mean permethrin isn’t still effective. It is used in households and by pest controllers around the world. That wouldn’t be the case if it didn’t work.

Currently, permethrin can kill most infestations. It will dramatically reduce the number of bed bugs, even if some are immune.

The issue is that bed bugs are becoming increasingly more immune. That’s why scientists are trying to find new pesticides as soon as possible.

Permethrin is on the World Health Organization’s List of Essential Medicines. But that doesn’t mean it’s necessarily safe. It can cause mild irritation and a burning sensation when applied to the skin.

People hardly absorb permethrin when it’s in their environment, or is applied. It’s considered safe for use on the skin, and is sold as lice and scabies treatment. The FDA considers it safe to use after two months’ of age.

Permethrin is not highly toxic to mammals. But you should nevertheless avoid contact with eyes, skin, and clothing. You should also wash thoroughly after handling and avoid breathing in any spray.

The reason it isn’t highly toxic is that the mammalian body can generally break it down. It ends up in the liver, which can break it down and then excrete the waste products through urine.

Is Permethrin Dangerous to Children and Animals?

The can of permethrin you buy at a store will have directions on use. If you follow these directions, you are in no danger. But there are a few things you should be aware of:

The directions for using permethrin are simple. Follow the instructions received with the can at all times. This will prevent health issues.

Animal studies have looked at the chronic toxicity of permethrin. It has been shown to affect rats’ fertility if ingested at oral doses of 250 mg/kg during pregnancy. This suggests that during pregnancy, you may be particularly susceptible to permethrin.

But other studies show no effects. It does not seem to be capable of causing mutations in embryos, or alter their development.

Is Permethrin a Carcinogen?

When applied to the skin, permethrin is not readily absorbed into the body. This limits the adverse health effects it can cause.

However, if ingested, it is considered a likely carcinogen by the EPA (Environmental Protection Agency). This is based on studies of mice that developed both liver and lung tumors after ingestion. It’s unclear how much you would have to ingest, so don’t ingest any.

As for whether it’s carcinogenic if you spray it, that’s unclear. No long-term studies have shown a link between normal permethrin use and cancer. But since it’s a carcinogen when you ingest it, there’s a possibility.