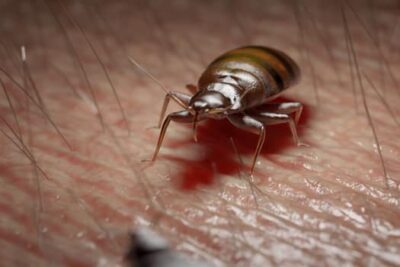 When you look at a mammal, it’s usually straightforward to tell males and females apart. But telling male bed bugs from female bed bugs isn’t nearly so easy.

The abdomen of females is rounded, but pointed in males. Females can lay eggs while males can’t. In all other ways, they are the same. Both male and female bed bugs bite. Both are the size of an apple seed and brown, with six legs.

Telling the difference is important because you can tell whether solitary bed bugs have been laying eggs in your home. Below, we explain how to identify male and female bed bugs.

Are There Male and Female Bed Bugs?

Like other creatures, there are male and female bed bugs. There need to be so that they can mate and reproduce.

However, they don’t fulfill different roles. Both males and females bite, for example. Neither males nor females look after eggs once they are laid.

Neither males nor females look after nymphs when they are young. The only differences are that females lay eggs, and males have a pointed abdomen.

Can Female Bed Bugs Lay Eggs without a Male?

Female bed bugs cannot lay eggs without mating first. They need to combine the male’s sperm with the female’s egg to create offspring. The female then lays the egg later on.

However, bed bugs are different in one regard. The female can store the male’s sperm for a long time after mating. She can also draw on it several times to create several eggs rather than one.

This means that a female can lay eggs without having mated immediately prior. That being said, there is one more thing the female needs. She needs to have a blood meal before each time she creates and lays an egg.

The female has unique body structures that allow her to produce eggs. According to the journal Insects, she has a part of her body called a hemocoel. This is a large empty space in her abdomen. Males don’t have one.

To mate, the male will break through her shell to access the hemocoel. When the sperm is inside the hemocoel, it spreads to the female’s bloodstream. From there, it will eventually reach her ovaries. This process is called traumatic insemination.

During mating, the male will search for a small dark spot in the female’s abdomen. This is the hemocoel. He will aim for it so that he can successfully mate.

Traumatic insemination has been noted in bed bugs of the genus Afrocimex, which are not present in the U.S. This makes it likely that male-male mating pairs do occur in other Cimex species. But these pairs will never create an egg.

What Do Male and Female Bed Bugs Look Like?

Male and female bed bugs are broadly similar. Characteristics they share include:

In terms of their body layout, both bugs are the same. They have a tiny head with two eyes which are hardly visible to the naked eye. They each have six legs, two which point forward and four which point back.

They each have a small thorax, i.e., chest area, and a larger abdomen. From their head, they have two antennae about as long as their legs. Both have a tiny proboscis (straw-like tube) that they use to feed.

They are the same size. Both start as eggs that are the size of the thickness of a quarter. They go through several nymph stages, getting bigger each time. Males and females are the same size throughout this process.

Each kind is roughly the size of an apple seed when an adult. They are approximately the same shape, too. Males are slightly longer because of the shape of their abdomen, as we will see in a moment.

When they feed, they grow much longer. Their abdomen expands both horizontally and vertically so that they can take more blood. Males and females expand to the same extent.

The main difference between males and females is their shape. Specifically, the shape of the abdomen is different. Males have a pointed tip to their abdomen, i.e., the rear of their body. This is the part that expands when they feed.

The tip of their abdomen is pointed. The shape is reminiscent of a cartoon love heart. Or, again, it’s similar to the shape of an apple seed with its pointed end. Females have a rounded abdomen. Compare them side by side, and you’ll always tell the difference.

The only issue is when the bed bug feeds. When the bug feeds, their abdomen becomes much longer. When this happens, the shape difference becomes less noticeable.

Both males and females have patterns on their abdomens. They have what look like stripes that run from right to left. This is the mechanism that helps their abdomens expand, almost like an accordion.

The pattern on their backs varies slightly between males and females. Females have a slight ridge in their back, towards their tail end. This is where their hemocoel is.

The fact that this area is slightly raised makes the pattern look different. In males, the lines run straight from left to right. In females, the line curves somewhat when it crosses over this ridge.

However, this difference in pattern is both variable and difficult to spot. You would find it far easier to spot the difference through shape rather than the pattern.

While both bugs are brown, there may be a slight difference in color. That’s because their skin is somewhat see-through.

Why does this make a difference? Males and females have different internal organs. Females have ovaries and a hemocoel whereas males don’t. You can see the outline of the hemocoel towards the back of the female’s abdomen. It looks like a dark spot.

Both male and female bed bugs bite. Blood is their only source of nutrients. Here are the parts of the body that bed bugs like to bite while you sleep.

Bed bugs developed from creatures called bat bugs. Bat bugs look the same as bed bugs. The only difference is that they live in caves with bats.

In these caves, the bugs would be high up, and live on the ‘ceiling’ where the bats roost. Here, they would have access to no food and no hosts but the bats. They became dependent on the bats’ blood as their only source of food. To this day, bed bugs are the same.

Both males and females will bite. They each have a unique mouth, entirely unlike ours. It has two parts. The first is the proboscis, a long straw that sits where their mouth would. They use this to drink.

Underneath their proboscis is something similar, but shorter. They use this to scratch at the surface of your skin and create an opening for their proboscis.

However, females may bite more frequently. That’s because they need to take a blood meal every time they develop an egg. Some females lay an egg every other day. They need to bite for their own nutrition, and to develop eggs.

If you have a large infestation, telling the males from the females doesn’t matter.

But if you’ve found one bed bug, that could be a small or big problem. It depends on whether the bug is male or female. If the bug is a female, then she may have been laying eggs nearby.

One sole male bed bug on its own isn’t much of a problem. If you kill it, there won’t be any eggs that it may have left behind.

A male explorer was likely hungry and continued searching until it found the signs of a host (you). It means there may be an infestation nearby. This infestation may not be getting enough food, which made the bed bug seek out a new host.

She can continue laying eggs for weeks even without mating again. These new eggs will hatch and begin to feed themselves. That’s how all new infestations start. She will eventually mate with some of her offspring, and the offspring will mate with one another, and the infestation will get bigger.

Or, she may have been hungry, like the male in the example above. If that’s the case, then she won’t have been laying eggs, which is good.

If it’s a female, and you can’t spot any more bed bugs, it’s likely a solitary bug. It may have been laying eggs, so search thoroughly around the corners and joins of your furniture. Check around the fabric edges of your mattress, too.