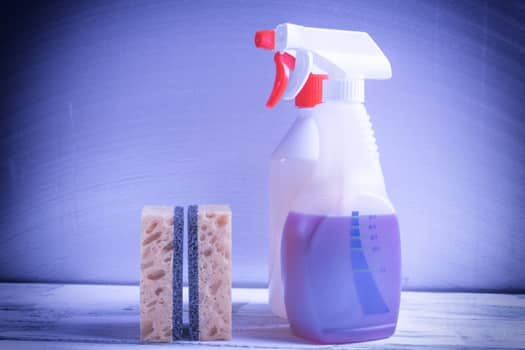 Rubbing alcohol can kill bed bugs, but it only works on contact. It acts as a desiccant and solvent, which means that it destroys the cells of their outer shell and dries them out. However, drawbacks include that it is flammable, it smells very strong, and it’s only a contact killer.

There are far better options that are either less dangerous, odorous and difficult to source. But if you lack access to any other ways of getting rid of bed bugs, it can work in the right circumstances.

Does Alcohol Get Rid of Bed Bugs?

Yes, alcohol kills bed bugs on contact—but it’s not the best way to do so. There are two mechanisms by which it can work. The first is that it’s a solvent. Solvents are liquids that can dissolve something to form a solution—a mixture of the solvent and the dissolved thing. While it’s not strong enough a solvent that it can completely dissolve a bed bug, rubbing alcohol is strong enough that it destroys some of their cells; this can kill them.

Not only that, but rubbing alcohol is a desiccant. It dries the bed bugs out. Because bed bugs don’t drink, and only eat very infrequently, they can very quickly dry out in the face of a desiccant. Alcohol can first destroy the thin layer of cells coating a bed bug’s shell, which helps them conserve moisture. With this gone, they dry out quickly, especially when covered in or walking through some kind of desiccant. That’s why rubbing alcohol has a double effect.

Studies have been done into the effectiveness of pure alcohol as a way of removing bed bugs. The Journal of Integrated Pest Management examined many potential insecticide treatments. In particular, they looked at a rubbing alcohol spray for bed bugs called Phantom Termiticide-Insecticide, which contained 60.39% isopropyl alcohol as well as phenothrin. This novel form of treatment killed 85.7% of bed bugs, compared to 94.4% for traditional sprays like Suspend SC.

What about bed bugs and drinking alcohol, then? If you’re in a pinch, could you use vodka or something similar? No—because these kinds of alcohol aren’t strong enough pure alcohol is, obviously, 100% alcohol. The kinds you can buy at the store run from about 4% or 5% for beer, between 10 and 15% for wine, and up to 35 to 40% for vodka and whiskey. Perhaps the very strongest you could buy would work, but you’d be better off using pure isopropyl alcohol instead.

According to PLoS ONE, yes, bed bugs can detect scents. That’s how they figure out where they are in the world. It’s not clear whether bed bugs ‘smell’ things in the way that we do, but they can at least detect chemicals in the air.

Carbon dioxide, for example, is released in our breath; bed bugs are drawn to higher concentrations of CO2 in the air. They’re also drawn to warmth, although this isn’t to do with smell.

Bed bugs can also smell one another. Bed bugs have places called ‘harborages,’ which is where they live when they’re not feeding. These are dark and secluded locations where they’re unlikely to be disturbed; the underside of a mattress is the perfect example.

Bed bugs release scents when they’re scared, too, as a sign to other bed bugs nearby. When bed bugs smell this scent, they scatter, running as quick as they can to get away from the threat. While they won’t all survive when threatened, some will manage to slip away through cracks in the wall or the floorboards, and these individuals will get the infestation started again.

All of this is to say that yes, bed bugs can smell, so it’s likely that they can smell rubbing alcohol too.

Alcohol can repel bed bugs, because they’ve learned to avoid desiccants and other things that might kill them. This is a big part of the reason why they’ve developed an immunity to many common pesticides. They avoid direct contact, but can still live in the same area and absorb small amounts of the offending material. This gives them an immunity over time.

What the bed bugs will do is learn to avoid the place where they find plenty of the thing you’re using to kill them—whatever it is. Instead, they’ll make a harborage somewhere else. It could be the other end of the mattress, it could be in the box spring, or it could be underneath nearby furniture. Then, moving forward, they’ll avoid the rubbing alcohol when they try to find you at night.

As we’ve said, rubbing alcohol kills on contact, and repels bed bugs if it doesn’t kill them. So what about bed bug eggs? Well, it works in the same ways to kill them. It damages and dries out eggs, which means they’re less likely to hatch successfully. However, that’s only on contact. That means there’s a glaring problem you have to address.

If there’s a hidden area where your bed bugs like to lay their eggs, using rubbing alcohol elsewhere won’t kill those eggs. It will only stop the bed bugs from coming back to live in that particular place. Once those bed bugs hatch, they’ll happily start feeding again, and the rubbing alcohol won’t have any real adverse effect on them.

However, with regular treatment, you should still be able to get rid of every bed bug. By killing the adult population, you get rid of the bed bugs that can breed and lay eggs. If you then kill the bed bugs soon after they hatch, they won’t have had a chance to reproduce. Therefore, with repeated applications, you could kill the entire population.

How to Use Alcohol to Kill Bed Bugs and Their Eggs

So, rubbing alcohol really can work. But that doesn’t mean you should immediately pick some up and start dousing your mattress in the stuff. Treating bed bugs with isopropyl alcohol effectively is simple. Follow these guidelines to achieve the maximum effect:

You can also kill bed bugs by dropping them in isopropyl alcohol, if you don’t feel like squashing them. That’s what’s done with other parasites like ticks, for example.

How Long Does Rubbing Alcohol Work?

Rubbing alcohol starts working immediately. The bed bug doesn’t have to ingest it, because straight away on contact with their outer shell. The same applies if you put a bed bug into a jar of isopropyl alcohol: they’ll die straight away.

However, it would be unwise to think that you could directly spray every single bed bug. Bed bugs are very good at hiding, so the odds are that many of them will manage to avoid you altogether. These bed bugs will take longer to die. They’ll be able to survive until the next time they need to come out to feed. When they walk through areas that were sprayed with alcohol, their shells should become damaged, and they’ll die.

And remember what we said about bed bug eggs, too. The bed bugs that haven’t hatched yet will survive if you don’t spray them directly. You’ll, therefore, have to wait for them to hatch and start moving around before they die too. You can hasten the process by repeatedly spraying the area.

Should You Use Alcohol to Kill Bed Bugs?

So, we’ve explained how rubbing alcohol can kill a bed bug, and how you can use it. But is it the best idea? Are there better ways of killing bed bugs out there?

We would advise against using rubbing alcohol for many reasons, not least because it’s exceptionally flammable. If you douse your mattress in rubbing alcohol each week, it becomes more and more flammable over time. That’s a risk to your safety, not just that of the bed bugs. Aside from that, you should also consider:

Overall, these drawbacks mean that using rubbing alcohol is a bad solution for getting rid of bed bugs. If it was the only way, then maybe you could overlook them; but the fact is that there are many alternatives out there which have none of these terrible effects.

If you want something that has the same effect as rubbing alcohol, but with less of an unpleasant smell, you should try tea tree oil for killing bed bugs.

Tea tree oil does the same as rubbing alcohol: it can damage cells and dry bed bugs out. It can also repel them. However, it smells nicer, and isn’t a fire risk in the same way as rubbing alcohol is. Other essential oils are toxic to life, too, although to a lesser extent than tea tree oil.

You could also try one of several commercially available sprays, like Aprehend, Suspend SC or anything containing DEET. These sprays are specially formulated to both kill and deter bed bugs, and don’t smell as bad as rubbing alcohol does. They’re more effective, too, since they’ve been created to linger longer than rubbing alcohol can.