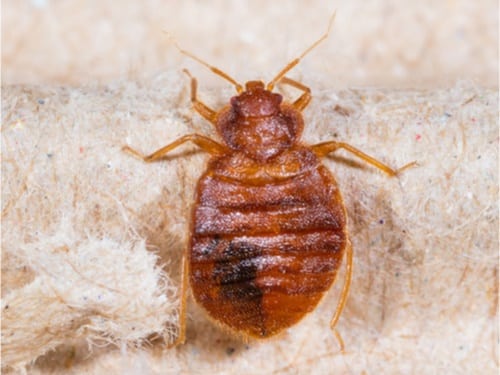 Bed bugs come and go in a way you can’t explain. You might get an explosion of bites one month, before experiencing far fewer the next. That’s because bed bugs go ‘dormant,’ i.e., become inactive.

In cold temperatures, bed bugs won’t feed, explore, and set up new harborages. They may lay some eggs, but they will take a long time to hatch. Bed bugs will also become dormant if they have no host.

Bed bugs don’t hibernate in the same way as other animals do. The process is a little different. Below we explain exactly what those differences are, and what encourages bed bugs to go dormant. We’ll also explore whether you can force bed bugs to become inactive.

In a way, bed bugs do go dormant in winter. They become less active than they are at other times of the year. This results in bed bugs breeding and feeding less regularly.

They do still bite, albeit less frequently. It takes longer for them to digest their food when it’s cold. They, therefore, don’t need to feed as often. If it’s exceptionally cold, then they won’t feed at all.

That being said, bed bugs don’t always go dormant. They live indoors, which means that they avoid the lowest temperatures.

If you keep the room at the same temperature throughout the year, then they won’t go dormant.

Do Bed Bugs Hibernate in Winter?

Hibernation is a term that refers to a specific physiological process. Hibernation is a state where an animal is inactive and slows down their metabolism. It usually occurs during the winter months.

Animals hibernate because there is less food available for them. During the winter, many species travel to warmer climates. The predator species that are left behind have less prey to feed on. Plus, plants don’t grow in the winter, so there’s even less food.

They also hibernate because they need to generate extra body heat, to stay warm. The combination of more calories burned, plus fewer calories consumed, would kill them if they stayed awake.

This is similar to what bed bugs do. Bed bugs are mainly dormant during the winter. They feed less often, they breed less often, and they don’t move as much.

However, hibernation is specifically a mammalian process. Only animals that produce their own body heat can accurately be said to ‘hibernate.’ So, while bed bugs may be dormant to an extent, they don’t hibernate like other animals.

Why Do Bed Bugs Go Dormant?

Bed bugs go dormant for two main reasons. The first is if it’s too cold, and the second is when there’s no host to feed on. You could also classify their inactivity during the day as a kind of ‘dormancy.’

Bed bugs become inactive in response to temperature. When the temperature cools to below average room temperature, they move around less. Any colder than that and they won’t move around at all.

Bed bugs and insects are dependent on living at the correct temperature. That’s because they don’t generate their own body heat. If a bed bug feeds during a cold snap, they won’t be able to digest their food.

This means that even if they do feed, the blood will sit in their gut for longer. In normal temperatures, bed bugs digest a meal in two to three days. In winter it can take them longer. If it’s cold enough, then their digestion stops completely.

All of this means that bed bugs bite less, breed less and move around less in cold weather. Across the U.S. generally, they are most active in August and least active in February.

New infestations are also less common in winter. That’s because bed bugs have to hide in your belongings to travel to new infestation sites. In cold weather, they explore less, and are less likely to survive a journey.

Do Bed Bugs Go Dormant When They Can’t Feed?

It’s worth noting that bed bugs don’t go dormant for the same reasons as mammals. Mammals may hibernate because of lack of food. But bed bugs have access to a host all year.

However, there will be bed bugs that don’t have access to a host. These bugs include:

These bugs have to survive without food for longer than usual. Others won’t be able to eat at all. When this occurs, the bed bugs will enter a sort of dormancy.

That’s because they will be unable to breed. Bed bug females need blood meals to produce eggs, and males need to eat to produce sperm.

In this state, bed bugs may survive for between one and two years. The colder it is, the longer they will survive. If at any point they are reintroduced to a host, they can continue their life cycle.

This is how bed bugs survive for so long in storage units and garages. However, despite not being able to breed, they will still be able to move around. They will move around more than usual, in search of a host.

Bed bugs also go dormant during the day. They’re photophobic, which means that they’re afraid of the light. You can see this in action if you disturb them, e.g., by lifting the mattress, during the day.

Instead, they come out at night to feed. They wait until the very early hours of the morning when you’re in your deepest sleep. Then they’ll come out to feed.

If the bug isn’t hungry, they won’t come out at all. There’s usually a three-day gap between each time they feed. During this time, they will hardly move around. They may mate, but not much else.

When Do Bed Bugs Come Out the Most?

Bed bugs are most active during the summer months. When the temperature is slightly warmer than average, they can digest their food quicker than usual and grow to adulthood faster.

It also means that they can breed more regularly. Both males and females need to feed to breed with one another. The female needs to breed any time she wants to lay an egg. More feeding, therefore, equals more eggs.

There are additional reasons why bed bugs prefer summer. Summer is usually more humid, meaning that they don’t dry out as easily. The temperature outside also means that they can travel longer distances. This helps them spread.

But according to PLoS One, bed bugs don’t like it when it’s too hot. At temperatures of 93 or higher, bed bugs start to die. Egg production, egg hatching, and molting success are all compromised. Increased mortality even continues after a recovery period at lower temperatures.

So, while bed bugs prefer summer, they don’t like temperatures that are too hot.

If the temperature is colder than usual, bed bug eggs will take longer to hatch. If it’s too cold, then they will be unable to develop, and won’t hatch at all. They may then stay dormant until the temperature rises again.

Bed bug eggs usually take between six to ten days to hatch. They can then develop into an adult in as little as ten or eleven days from hatching. This would occur at the ideal warm temperature of around 86 degrees.

However, if the temperature is colder than 59 degrees, then they won’t hatch at all. All animals’ biological processes require a specific temperature to occur.

Digestion is an excellent example. If the temperature is too cool, then the genetic material inside the egg cannot continue developing.

That would be why you experience a sudden ‘explosion’ of bed bugs when it gets warmer.

The big question is whether you can force bed bugs to hibernate or become dormant. You can, but it isn’t an effective method for getting rid of bed bugs.

And making them go dormant by putting them somewhere there isn’t a host won’t work either. Bed bugs in this situation can’t breed. But they will move around more than usual to try and find a host.

Far better is to try and kill them using conventional means. Pesticides and heat treatment are the answer to removing a bed bug infestation from your home.

1 thought on “Why Do Bed Bugs Go Dormant?”