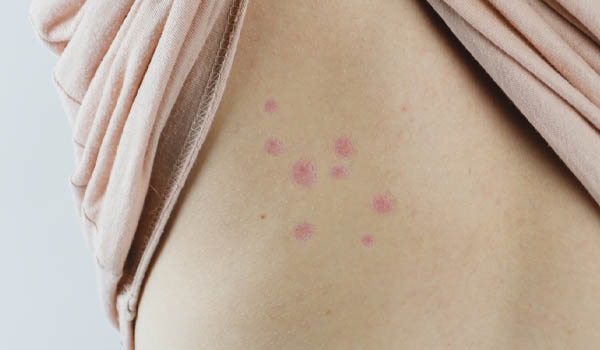 Spots are frustrating, embarrassing, and can be painful or itchy. What’s more frustrating is if you don’t know whether you’ve got small pimples or bed bug bites.

Bed bug bites are small, red, itchy, and swollen spots that appear in clusters. They appear in the morning after you’re bitten in the night. They are superficially similar to pimples. But bed bug bites can’t burst in the same way that some acne can. They also appear in different places, like on the arms and legs, where you’re significantly less likely to get acne or pimples.

With the issue identified, you can start your course of treatment. We’ll explain how bed bug bites look like pimples, how to tell them apart, and what to do if you can’t tell the difference.

There are several kinds of pimples. They are a spot where excess oils and dead skin cells are trapped in a pore. This spot can then react in several ways which will change how it looks.

Bed bug bites and pimples are easy to confuse. There are several ways they’re similar.

Bed bug bites look like other kinds of bug bites. They are difficult to tell apart from, for example, mosquito bites. If you’re not familiar with them, then you may get them confused with pimples too. They are as follows:

So, bed bug bites are red, swollen, appear in clusters, and are the same size as a pimple. It’s understandable if you get them confused.

Acne is far more than pimples. There are many different kinds of acne spot. And even if there aren’t any spots, acne leaves distinctive marks.

These marks cover sensitive areas like the face, especially around the nose, and the forehead. They are red blotches that take a long time to fade. In some cases, they never fade.

These red marks look similar to bed bug bites. They don’t have pimple spots in their middle, because they have long since burst. They remain swollen and red for a long time.

When Do Bed Bug Bites and Pimples Appear?

Bed bug bites appear the morning after a bed bug bites you. They begin to form immediately as you’re bitten, but reach ‘maturity’ by the morning. If you have a normal-sized infestation, you will experience several bites each night.

Pimples often appear in the morning too. There are several reasons why. Many people get acne from their pillow, unless they change it regularly. New spots will form overnight.

Also, spots get worse overnight. That’s not because they develop especially at night. It’s because you’ve been asleep for a long time, and you notice the difference in size from the night before.

As such, both pimples and bed bug bites will appear overnight, another similarity.

Telling the difference between pimples and bed bug bites is essential. You may think you have acne, but you have an untreated bed bug infestation. The sooner you realize what the issue is, the sooner you can treat it.

Whiteheads are a kind of pimple that can occur because of acne. They are a spot that has a small, white-yellow dot in the center. The rest of the spot is red and swollen, like other pimples.

This dot is a build-up of fluid. This fluid begins as sebum, a kind oil that the skin naturally produces. This oil builds up over time, especially in folds, e.g., around the nose. Enough sebum gets into the pore that it gets blocked.

It’s common for this oil to contain small amounts of bacteria. If it does, these bacteria will create an infection in the pore. The body will fight the infection, which leads to the creation of pus. This is the white fluid inside a whitehead. It adds to the pressure that the sebum already caused.

Bed bug bites don’t ever have a white spot in the center. While the body does fight off a potential infection, the resulting pus would not form within a pore and cause a whitehead. Any that would be created would be processed internally.

Blackheads are a kind of acne where dirt builds up in a pore. Unlike whiteheads, the pore isn’t closed, so it doesn’t form a spot that can burst. Instead, you have an open spot with black in the center.

This black spot isn’t caused by dark dirt. Rather, it’s caused by the oxidation of sebum. Blackheads are similar to whiteheads. The only difference is that the pore isn’t blocked, so pressure can’t build.

Bed bug bites don’t have black spots in the center. While they are red and swollen like pimples, they are smooth.

Where Do Acne and Bed Bug Bites Appear?

Another significant difference is where you get acne vs. where you get bed bug bites. Acne appears in sensitive locations where there is a lot of skin oil (sebum) that builds up in pores. These locations include:

These are the locations where the body has the most sebaceous glands.

Bed bug bites don’t only appear in these places. Instead, you get them anywhere that might be exposed while you sleep. The head is exposed, but bed bugs prefer the neck, as your face moves too much and is too sensitive.

Bed bugs will also bite the arms and legs, as these poke out of the blanket. So, if you have lots of spots and marks here, it’s more likely to be bed bugs than acne.

Bed bug bites swell up compared to the skin around them. It stands to reason that they could burst. But they can’t.

Whiteheads can burst because the pore is clogged. Fluid masses underneath the pore, causing the spot to swell. The pressure builds inside until it bursts on its own (unless you burst it first). Bursting is a result of how these spots occur.

Bed bug bites don’t swell for the same reason. They swell because the bed bug uses their saliva to numb the bite site. Your body recognizes this saliva as a dangerous foreign substance. It then has to get rid of it.

What happens next is called the histamine response. The area around the bite swells to increase blood flow, and increase the number of anti-bacterial cells the immune system sends. There isn’t any ‘pressure’ to be released, so the spot can’t pop.

If you try to squeeze a bed bug bite, it won’t burst. It feels like a solid lump. That’s because there isn’t excess fluid under the surface of your skin, it’s just your layers of skin, fat, and blood. It feels hard if you squeeze and roll it.

How Long Until Acne and Bed Bug Bites Disappear?

Acne pimples grow over the course of days. The whitehead will then develop until there’s too much pressure and it pops. What’s left is a red, swollen lump. This can take around a week.

Bed bug bites develop and fade differently. The spot begins to form the morning after the bite. It will stay around the same size for a week, before fading over the course of the second week. That means they form more quickly and disappear more slowly than pimples.

In the meantime, you will likely be bitten more. So, while acne/pimples can come and go, bed bug bites will continually reappear. Some acne is the same, but some are not, so this could be another difference.

Overall, there are several ways to tell the difference between bed bug bites and pimples. But if you’re still not sure, search for the bed bugs in your home.

They are likely to be under your mattress, in your bed frame, and under nearby furniture. And if there aren’t any bed bugs, search for the signs.

Bed bugs leave behind old shells and feces that are recognizable. Here is some advice on how to avoid getting bitten by bed bugs while you sleep.