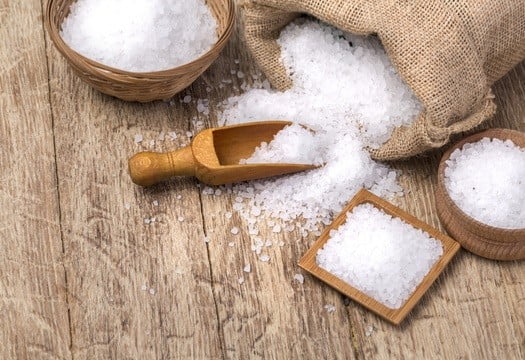 Home remedies for bed bugs are very popular. Given that other treatments are so expensive, using salt to kill bed bugs would be the perfect solution. And there’s proof that it eliminate other pests.

Bed bugs have a waxy shell that prevents salt from drying them out. Salt can’t scratch that layer away to dry them. And since bed bugs can’t ingest anything but blood, you can’t poison them with salt. No mixture of salt with anything else, e.g., Epsom salt or borax, is more effective.

You need to use proven bed bug control methods. You can try salt—and we describe how you might be able to below—but be aware that there are better natural ways to kill bed bugs.

Why is It Believed That Salt Can Kill Bed Bugs?

There are reasons people believe that salt might be able to kill bed bugs:

It’s also alluring because salt is cheap and easy to use. And 99% of households already have salt available.

There’s no proof that salt kills bed bugs. There are no scientific papers on the topic. There aren’t even any blogs that suggest it might work. It’s reasonably clear that it’s ineffective.

You’ll come to understand why salt doesn’t work. Bed bugs aren’t like other pests. They don’t ingest poisons, because they only ingest blood. And you can’t just cover them in a dry powder and expect them to dry out.

There are a few other reasons why salt is ineffective:

So, there’s nothing to suggest it works. And there are many reasons why it doesn’t measure up to other bed bug treatment methods.

Table salt is perfectly fine for killing other pests, but not for bed bugs.

The reason why it won’t work is that people have a misconception about bed bugs. People think you can dry them out. And in a way, you can. Using diatomaceous earth is proven to dry them out.

But salt can’t do the same. It’s because diatomaceous earth doesn’t leech the moisture out of bed bugs, as some people believe. Instead, it scratches their shell. It peels and rubs away the coating of their exoskeleton. Without it, they dry out.

Table salt won’t do the same. Diatomaceous earth does so because it’s exceptionally rough at a molecular level. Table salt is quite rough, but not in the same way.

Many bed bug treatment methods are sprays. Sprays are highly effective since they spread the toxic substance very widely. This means that the bed bugs can’t easily avoid walking through them.

The only problem is that salt water isn’t toxic to bed bugs. Here’s another misconception. If you were to drop a bed bug into a jar of salt water, they would die. But spray them in the stuff, and they’d be just fine. That’s because the water doesn’t poison them; it drowns them.

If you sprayed salt water on your mattress, it would have a few effects.

Aside from that, though, it would do nothing. And it certainly wouldn’t kill them. Salt isn’t toxic to them, so salt water sprayed on them isn’t either.

In this context, the idea is that baking soda can dry bed bugs out by absorbing their moisture. But it can’t be done without breaking through their waxy shells. Baking soda can’t do that on its own. It’s the wrong texture.

Borax, or sodium borate, is another general-purpose cleaning powder/solution. However, unlike the others on our list, it is effective against some bugs.

According to the Journal of Economic Entomology, boric acid dust can kill 90% of a cockroach infestation in just 15 days. This was more effective than commonly used pesticides like sodium tetraborate and disodium octoborate. The only issue is that it’s difficult to spread around.

In this way, borax kills cockroaches and similar bugs. But it doesn’t kill bed bugs. Bed bugs can’t ingest borax because they only eat blood. They don’t have a mouth. They have a long tube like a mosquito.

Because they can’t ingest it, the borax does nothing. There’s nothing about adding salt to borax that makes it any more effective. It also doesn’t dry them out.

Epsom salt, or magnesium sulfate, is a kind of salt that’s again used for many purposes. It’s used in agriculture to add sulfur to the soil, it’s used in brewing beer, and it’s used around the home too. Some gardeners swear by it, in that it repels garden pests, although this isn’t proven.

As for whether it kills bed bugs, again, there’s no proof that it does. Epsom salt won’t dry them out. And since bed bugs can’t ingest anything but blood, it won’t poison them either.

No mixture of Epsom salt with table salt, borax, or anything else will help you kill bed bugs. You should stick to tried and tested means instead.

The idea of putting salt in bed sheets to kill bed bugs might make more sense. The bed bugs are by necessity kept near the salt at all times. And there’s less room for them to avoid the salt grains.

However, it doesn’t make a difference. Bed bugs can easily avoid small salt grains in your sheets.

How to Kill Bed Bugs with Salt

If you were to kill bed bugs with salt, there would be many ways you could do so.

The only issue is that salt doesn’t work. However, you could use similar powders to achieve the effect you want. Without going into too much detail, pesticide powders and diatomaceous earth work well.

While salt can’t repel bed bugs, it may still be useful. Salt has long been utilized for its slight antiseptic properties. You might have previously used it on mosquito bites.

As for whether it works on bed bugs bites, there’s nothing to say it does. Bed bugs bites (and mosquito bites, too) are the result of inflammation. They occur because:

The itching is a result of the body’s natural response. When the body notices something that shouldn’t be there, the area becomes inflamed. This allows more blood to access the area, and therefore more white blood cells.

You don’t want to stop inflammation. Inflammation is a good thing in this context, because it allows the body’s natural defenses to work.

As for stopping the itching and pain that bed bug bites cause, salt water isn’t the answer. Even if it did have slight anti-itching properties, there are much better remedies out there. Anti-itching creams are very cheap and highly effective.

2 thoughts on “Can Bed Bugs Be Killed by Salt?”