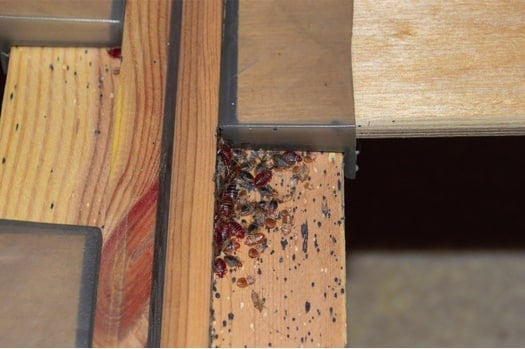 It’s easy to work out if you have a bed bug infestation. They leave behind their dead, feces, and old bed bug shells. Like other parasitic insects, bed bugs have to molt.

Bed bug exoskeleton molting occurs because they grow too large for their shell. Bed bugs molt between instars/life stages. They can double in size during each stage, but their rigid shell doesn’t grow with them. They grow a new one under the old one. Bed bug adults don’t molt as they don’t grow larger.

Because only juvenile bed bugs molt, old bed bug shells are a sign of a growing infestation. If you see lots of bed bug shells under your mattress, for example, begin heat treatment right away.

Why Do Bed Bugs Shed Their Shells?

Bed bugs are not the only bug that sheds their skin. It is called molting, the general term for shedding old skin, feathers or shells to make way for new ones. It’s common among insects.

This is a vital process, and without it, bed bugs couldn’t complete their life cycle. There is always a good reason for them to do so.

Bed bugs go through several stages in their lives. Like other insects, they start as an egg. This egg hatches into a nymph. But they don’t grow in the same, semi-constant way that mammals do.

Instead, they go through recognizable life stages. There are five juvenile stages of the bed bug’s life. These are termed ‘instars’: first, second, third, fourth, and fifth instars. In each of these stages, the bed bug becomes progressively bigger and browner.

They stay the same shape throughout these stages. They don’t metamorphose like a caterpillar. But they do get larger and larger. Because their shell is rigid and can’t grow bigger, they need to shed it periodically and replace it with one that fits correctly.

After the fifth instar, the bugs enter their adult stage. In this stage, the females and males are roughly the same size. The male’s rear end is pointed, while the female’s rear end is rounded. That’s the only external difference between the bed bugs two sexes.

When Do Bed Bugs Shed?

Bed bugs shed their skins in between each time they feed. They will feed, before using the nutrients in the blood to grow. This will make them too big for their shell, and they will make a hole in it to climb out.

Like other animals that shed, they develop a new layer of skin/shell under the old one first. This ensures that they are never without their protective layer.

It’s unlikely that you will ever catch a bed bug in the process of shedding. They do so in their harborages, where they’re hidden from view. It takes them a while to create a hole to get through, but the process itself is quick.

In warm environments, bed bugs can feed and progress to the next stage every other day. This means they can reach adulthood within two weeks or so. This is naturally most likely to be possible in the summer.

In the winter, during colder weather, it may take them several days between growth stages. This is because it takes longer for their food to break down, so their metabolism is slower. But because of steady indoor temperatures, bed bugs continue feeding throughout winter anyway.

As you can imagine, this translates to a lot of shed skins. These shells accumulate wherever there are bed bug juveniles.

Once a bed bug reaches adulthood, it stops molting its shells. That’s because they stop growing. As growth is the only reason that bed bugs will shed their shells, adults don’t need to. They stay the same size throughout their adult life.

If you see an adult-sized bed bug shell, it may not be just the shell. It may be a dead bed bug instead. Poke it, and if it doesn’t move, it’s dead or a shell. If the outside of the bug doesn’t look translucent, and it looks full, then it’s a dead bug, not a shell.

Alternatively, it may be the shell of a fifth instar bed bug that grew into an adult. Fifth instar bed bugs are smaller than adults, but not by much. So, if you see an adult shedding, it’s likely one of these.

What Does It Mean When Bed Bugs Shed Skin?

Bed bug shells indicate that your infestation has been in situ for a long time. That’s because adults don’t shed their shells.

Solitary females usually start infestations. The female can mate once, and then lay dozens of eggs with sperm stored in her hemocoel. She feeds before she lays each egg, which is the first sign of the infestation.

These eggs hatch in around two weeks. They then start feeding too, and shedding their skin each time. Shed nymph skins are small, white, and easy to miss. That’s because nymphs are much smaller than adults. Bed bugs turn brown the more they feed.

Either way, this means that you still may not notice the shells. It’s only the later instar shells that are easy to notice. So, if you see lots of these shells, it means that the infestation has already been there a while.

If the shell has been left somewhere that is rarely disturbed, it may be years old. If that’s the case, the shell could be a sign of an old infestation. That infestation may have been killed since it was left there.

Bed bug shells aren’t necessarily a sign of a living infestation. They could show that the previous tenant or owner of the house had bed bugs.

Bed bug bites aren’t the only sign that they’re feeding. Discarded bed bug shells are, too.

In the same way, bed bugs have to feed before they grow from one stage to another. They feed, then digest for at least a day. During this period, they use the nutrients they’ve gained to grow bigger.

According to the Journal for Nurse Practitioners, it’s during this process that they shed their skin. Otherwise, their shell would be far too small for them. They will repeatedly feed during the week if food is available, and can grow to an adult in 35 days.

So, bed bugs shedding their skin means they must have been feeding.

Bed bug shells don’t rot away or get eaten. They’re made of a nail-like material that doesn’t biodegrade quickly. They stay where the bed bug left them unless they get brushed away.

This means that bed bug casings are a good sign of an infestation. If you find shells, the bugs likely aren’t far away. Here’s a brief guide on what they look and feel like, to help.

Old bed bug shells look like live bed bugs. They have a large abdomen, a small body, and legs.

The only significant difference is that the shell looks more translucent. That’s because the bed bug’s body isn’t inside. Bed bugs look most opaque after they feed, when they are full of blood. Their rear end becomes longer, red and swollen.

Without blood or the bug’s body inside, the shells look slightly translucent instead. You may also notice the hole that the bed bug escaped their old shell through.

Nymph bed bugs are as small as a grain of rice. Their shells will be difficult to notice. That’s because, in addition to being small, they’re white. And since they’re smaller, they’re also easier to accidentally crush and destroy.

The shells of the other bed bug instars are between this size and adult size. Once they progress to the second and third instars, their shells have become brown. This means they’re easier to notice.

What Color are Bed Bug Shells?

As stated above, bed bug shells are slightly translucent. However, they are still noticeably brown. The brown in the bed bug’s shell comes from its diet of blood. You can see this process in action, because nymphs which have never fed are a white to off-white color.

You can’t tell live bed bugs from their old shells purely through color. They are the same color of brown. But because the old shells are slightly translucent, they may appear a lighter shade.

Bed bug shells are made from a nail-like substance called chitin. However, that doesn’t mean they’re rigid and difficult to squash. They can be squashed easily, especially if they have just fed.

When they are unfed, they are pretty tough, and the shell on its own is quite rigid. You can’t squash and smear it, e.g., with a napkin, like you would a recently fed bed bug.

Chitin is a hard and tough substance that occurs widely in nature. It forms the exoskeletons of bugs like these, and also bigger creatures like crabs. It’s perfect for light armor like a bug’s shell. If you ever eat shrimp, their hard shell is made of chitin.

Chitin in exoskeletons is often accompanied by an elastic, rubber-like substance canned resilin. This allows stretching and movement, e.g., at joints. It also allows the bed bug’s abdomen to extend outwards.

What to Do If You’ve Found Bed Bug Casings

If you find bed bug shell casings, you should get treatment. Casings are a sign of a growing infestation. They indicate that:

The issue is that bed bugs multiply in number quickly. A female can lay one egg each day, or at least every other day. Each of these eggs will hatch and grow into an adult within a month or so. These bed bugs will then begin producing eggs too.

If the infestation was started by a solitary female, meaning all the bed bugs are related, that doesn’t stop them. Bed bugs have no qualms breeding with other bed bugs, whether they’re of the same gene pool or not.