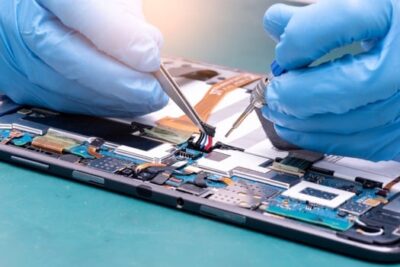 Bed bugs are notorious for being great at hiding. They’re so good that they can hide almost anywhere: in bedding, in furniture, under the carpet, behind the baseboard and more. But can bed bugs hide in electronics like TVs, appliances, and smartphones?

Bed bugs will live anywhere that they’re unlikely to be disturbed, which is dark and close to their host. A TV near your bed would fit the bill, as do electrical sockets. They may also be drawn to electronics as they’re consistently warm, which they much prefer.

All that being said, you’re unlikely to find any bed bugs in your electronics or appliances. This is because they prefer being close to their host. The closest they can get to you when you’re asleep is your mattress and bedding, so that will always be their number one choice. But, if you have a severe infestation, it is possible.

Bed bugs can live inside electronics and appliances. Anywhere that they’re safe and secure, which is near enough to a sleeping host, is an ideal spot.

The only issue is that electronics and appliances don’t tend to be close by when you’re sleeping. Kitchen appliances, for example, are in the kitchen. Not only are they about as far as you can get from your bedroom, but the bed bug would have to crawl under a door or two to get to you.

As far as they’re concerned, it’s just not going to happen. As such, they won’t stay there, preferring to sleep with you in your room instead.

You’ll only find bed bugs in electronics under certain circumstances. These are as follows:

You might know that bed bugs are drawn to their host because of the host’s body heat. However, their instinct to find somebody warm only kicks in when they’re hungry. They won’t live in electronics because they’re warm, unlike cockroaches and other bugs.

Can Bed Bugs Live in TVs?

Almost everyone has a TV in their room these days. Electronics or appliances in your room are much more likely to become infested because of their proximity to your bedding. But, can bed bugs infest televisions?

Bed bugs can live in TVs, although they’re less likely to these days. When CRT TVs were popular, before today’s slim TVs were invented, there was room for a bed bug to crawl inside. Most TVs even had air holes that they could get in through, so the TV wouldn’t overheat. Once inside, they were in the perfect environment, since it was warm and sheltered there.

Today’s TVs are less appealing to a bed bug. They’re slim, so there’s less room inside. And there aren’t any obvious ways in like there used to be. It can still happen, but you’re not likely to find any in there unless you have a very severe infestation.

If there are bed bugs in your TV, there’s no great way to get rid of them. Your best bet is heat treatment, which raises the temperature of an entire room or house above the level at which bed bugs can survive. Check to make sure that your TV is designed to withstand temperatures above 120 degrees before committing to heat treatment.

Bed bugs are more likely to find their way into a computer or computer monitor than a TV. Desktop computers have far more access points for them, while still being consistently warm.

If your computer is in your room, that increases the chance that there may be some in there. There may also be some underneath it, since people rarely pick up or move their desktop computer.

As for a laptop, there aren’t as many entry points. If you were to leave your laptop under the bed untouched for a significant period of time, then there’s a chance that they could squeeze into the crack between the screen and the keyboard. They could also get underneath the keyboard keys, depending on how big and chunky they are.

If there are bed bugs in your laptop, or you suspect there are some inside, there aren’t many good ways to get rid of them. You could try bagging it, although bed bugs can survive in a sealed bag for over a year. You could try spraying the laptop with pesticide spray, although that would probably break it. Again, heat treatment might be your only option.

Can Bed Bugs Live in Appliances

Appliances offer more scope for bed bugs to get inside and set up an infestation. For example, when was the last time you moved your washing machine or oven from where they’re sitting? Probably never. That means they offer a good hiding place for insects that don’t like to be disturbed.

The only problem is that appliances don’t offer anything that bed bugs might want. Cockroaches might eat leftover food or sauce that’s splashed onto a countertop. But bed bugs don’t, so there’s nothing to be gained for them by living underneath an oven.

The same applies to the question of can bed bugs live in a microwave? On the one hand, there are many definite entry points, like the cooling vents on the side or at the back of most microwaves. But there’s no benefit to bed bugs choosing to live there because they can only feed on blood. Plus, they would be some distance away from you when you sleep.

Why does that matter? Because some people vacuum their mattress and box spring to suck up any bed bugs they find. According to the Journal of Economic Entomology, it’s a good way of stopping an infestation from getting out of hand, even if it can’t get rid of every single bed bug.

The problem is that if you don’t empty the bag afterward, the bed bugs will still be in there. There’s no guarantee that they can’t climb back up through the hose.

Every time you vacuum up some bed bugs, you should empty the bag outside. Emptying the bag inside will release the living bed bugs back into your home, which is the last thing you want.

If you release them outside, they shouldn’t be able to find their way back in. That’s especially the case if you keep a little distance between your trashcan and your home.

If you do want to use vacuum cleaning as a method of managing bed bugs, do be aware that it won’t get rid of every bed bug, or their eggs. You should combine it with other management methods like fumigation, sprays, and traps for maximum effect.

Can Bed Bugs Live in Refrigerator?

While bed bugs can live appliances, they’re unlikely to choose the fridge. Bed bugs can’t eat anything other than the blood of their host. They can’t eat crumbs, leftovers or dead skin like carpet beetles or cockroaches. As such, there’s no point to them being in the fridge.

Worse still, it would be bad for them. In cold temperatures, bed bugs struggle to move and breed. They prefer the heat of a warm summer over anything, which is when they’ll breed the most.

Not only that, but if they were shut in the fridge, they wouldn’t be able to find you to feed. A fridge is the last place they’d want to hide.

That being said, they could hide around the back of the fridge. The rear of a fridge is typically quite warm, which bed bugs like. However, bed bugs are most likely to pick hiding spots that are within six feet of your bed. The fridge is a little too far away for them to get to you when they need to feed.

Can Bed Bugs Live in Phones?

No, bed bugs can’t live in your phone. They might be thin and small, but there’s no way for them to get inside. The headphone jack—if your phone still has one—isn’t big enough for them to crawl in. The same applies to the charging port.

The only exception is if your phone has a fabric case, and you instead leave it by your bed. In that circumstance, there’s a chance that they could have found their way into the crack between the case and the phone. But you would never have to use your phone, because if you did, you’d crush them.

How to Get Rid of Bed Bugs in Cell Phones

Your best option is to bag your phone for as long as it takes for the bed bugs to starve. Believe it or not, that can take a year or longer, in the right conditions. Bed bugs can live for a long time without food. You could speed up the process by leaving your phone somewhere hot (hotter than 120 degrees) for an hour, which is enough to kill both bed bugs and eggs.

All that being said, it’s highly unlikely that you’ll ever encounter bed bugs inside a cell phone. If you think there are some in your phone, that’s more likely to be a symptom of anxiety and nerves (bed bug PTSD) than anything else.

Can Pre-owned Electronics Have Bed Bugs?

If you didn’t know, buying anything pre-owned is one of the easiest ways to catch bed bugs. Buying a second-hand mattress is like a first-class ticket to bed bug town.

Pre-owned furniture, appliances, and electronics can all have bed bugs in them too. If you’re dead set on having a bed-bug-free apartment, you should avoid buying anything preowned.

If you don’t have any other option, be clear with the person you’re buying from. Tell them that you have to come and see whatever you’re buying, before you buy it. Then perform a quick inspection to make sure there aren’t any bed bugs on it. You don’t have to be rude—just upfront about what you’re doing and why.

To be certain you don’t catch bed bugs from preowned electronics, quarantine them before you use them. It’s as simple as bagging them for long enough to kill any bed bugs.

First, spray anything you can spray, or give the electronics a gentle wipe with a small amount of insecticide (as per the instructions you get with the bottle).

Better yet, avoid buying second-hand electronics altogether. You might make a saving in the short term, but if you have to pay for an exterminator because you bought pre-owned, you’re losing money. Plus, electronics can harbor far worse bugs than bed bugs, like cockroaches.

If you’re searching for bed bugs in your home, start by looking in your bedding. Then move on to any furniture near your bed, like bedside cabinets or your wardrobe. These are much more likely hiding places for a bed bug than any electronics or appliances.

2 thoughts on “Can Bed Bugs Live in Electronics?”