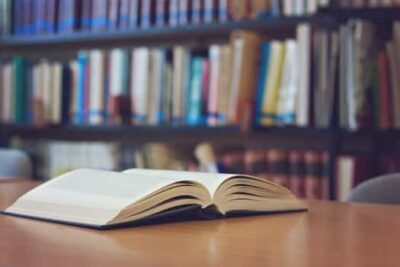 Bed bugs are hide-and-go-seek experts. So much so that they can even hide in books (especially hardback books with a gap between the pages and the spine). While this is rarer than finding them underneath your mattress, it can happen.

The most effective way to remove bed bugs from books is to use heat. Temperatures higher than 118 degrees will kill bed bugs, while paper famously combusts at 451 degrees. Alternatives include using pesticide sprays, although these may damage the book, so heat is preferred.

Some people recommend putting your books in the oven, since you can set the temperature to (for example) 150 degrees. This kills the bed bugs without the chance of the books burning. However, the books may contain materials other than just paper, plus it’s not wise to kill bed bugs where you also prepare food. There are other ways to kill bed bugs in books fast.

Will Bed Bugs Live in Books?

Bed bugs are most comfortable when they’re within a few feet of their host’s sleeping place. That usually confines them to your room, unless you sometimes sleep on the couch too.

They also like dark, quiet places where they aren’t disturbed. So, while they love living under a mattress, they usually won’t choose to live under a pillow.

So, what does that mean for books? Well, many people keep bookshelves or small piles of books in their bedroom. Right away, that makes them a possible ‘harborage’ target (a harborage being the place where bed bugs live).

Books also offer cracks and crevices that a bed bug could hide in. There are the spines of hardback books, for example, which they can easily crawl in and out of.

And despite our best intentions, books often go untouched for months at a time. There may be one or two on your shelf that you bought and haven’t ever read. The fact that you don’t move them around makes them a perfect place for a bed bug to hide.

Aside from that, there’s the question of library books. The majority of infestations start because of public things: public transport seating, for example, can harbor bed bugs.

Hotel rooms are a very common vector. Library books, which can be shared many times in a year, can actually transport bed bugs and their eggs from place to place.

Can Bed Bugs Live on Paper?

Bed bugs don’t dislike paper, and can live on it if they need to. Bed bugs in paperback books don’t have any choice but to live in contact with paper. They’ll happily live underneath or behind the book, although there’s not likely to be room inside in between the pages.

If you’re wondering whether bed bugs eat paper, they categorically don’t. Bed bugs can only feed on blood. Their mouths are like those of mosquitos.

They don’t have teeth, just a long tube that they can drink blood through. So, even if a bed bug is starving and hasn’t eaten for a year, there’s no way for it to eat anything but blood.

But bed bugs can live in and behind books, and even in library books.

What Bugs Live in Books?

Far more likely that bed bugs in books are cockroaches. Bed bugs will only feed on blood. But a cockroach’s varied diet means that a bookcase would be a good home for them.

They can feed on the glue that holds together both paperback and hardback books. So, while they might not live inside the books themselves, they’ll live on and around bookshelves. Besides that, they’ll happily live anywhere in a home, not just in your bedding like bed bugs usually do.

There are a few other bugs you might find in books, too. You might find silverfish, which are very small silvery bugs that move quickly, like fish swimming through water.

Carpet beetle larvae may also live in books, especially if there’s any fabric nearby. You might also have heard of book lice, although they feed on mold and fungi rather than books themselves.

How to Get Bed Bugs Out of Books

The primary methods involve heat, physical isolation, pesticides or a combination of all three.

It’s also possible to use traps and lures to get rid of a bed bug infestation. Let’s take a look at which ways are the best, as well as how specifically to get bed bugs out of books.

Can You Put Books in the Oven to Kill Bed Bugs?

Is there such a thing as a bed bugs book oven? No, the idea is to use your regular oven. It can reach temperatures that will kill bed bugs in seconds flat. Bed bugs can’t abide heat.

According to the journal Insects, any temperature over 118 degrees will kill them, preferably higher. And the higher the temperature, the quicker they’ll die.

The oven is a contained environment in which the temperature is guaranteed to stay higher than 118 degrees, for however long it takes to kill each bed bug.

However, there’s an obvious problem. Putting books—or paper generally—in an oven isn’t a good idea. As any literature fan knows, paper will ignite at temperatures above 451 degrees, which is about as hot as an oven can reach.

If you were to bake your book at a temperature higher than that, it would ignite and start a fire. Lower than that, and it won’t catch, unless exposed to an open flame.

That’s just when you’re talking about paper, though. Books are made from other materials aside from paper. There’s the glue that binds the pages together, for example.

Hardback books often use string to hold the pages, which will ignite at a different temperature. And other books might have plastic covers.

Besides that, it’s unsanitary to treat any bed bug infested item somewhere that you also prepare food. Bed bugs that have just eaten will have a belly full of blood, and if that were to get onto your surfaces or in your oven, it could pose a health risk.

You might have seen a tip about library books. Bed bugs + library books + microwave = dead bed bugs. Again, the high temperature could kill them, but it’s not a good idea.

Putting books in the microwave essentially has the same drawbacks as putting them in the oven. The temperature in a microwave is harder to control than that in an oven.

Again, it’s unsanitary, because any bed bugs inside would die in there. They could crawl up into the mechanism of the microwave, or leave behind traces of blood that you could then ingest.

There are other specific risks regarding books in microwaves. If the book happens to have any metal in it, then that could begin to spark and could cause a fire.

If the book happens to have any plastic in it, there’s no telling how it could react. It could start to melt, and if you were to breathe that in, you could experience severe health complications.

While these methods have their downsides, there are other ways to use heat to kill bed bugs. Pest control operatives use a process called ‘heat treatment,’ which raises the temperature in your whole house to a level where it will kill any pests there.

This kills bed bugs in the same way as putting your books in the oven, but with none of the dangers or health concerns involved.

The pest controller will bring a small heater, which will raise the temperature indoors higher than 118 degrees. It will be quite a lot hotter, perhaps up to 150 or 160 degrees.

The point of these super-high temperatures is to help the interiors of furniture and bedding reach the required heat. Even so, it will take several hours for heat treatment to work.

Not all PCOs offer heat treatment. Most rely on pesticides, as they always have done. The equipment required is expensive, and using it is time-consuming, since it takes time for the temperature to rise.

Not only that, but they will have to seal any entry or exit points to keep the heat in. It takes a lot of time and money, and is often more expensive than regular pest control.

This might make it too expensive for you, but ask around and call some PCOs to find out how much it might cost.

Put Your Books in Storage

You could also try physically isolating your bed bug population. This involves putting your books somewhere that your bed bugs won’t be able to access you. Over time, this will starve the bed bugs, although that can take a long time.

As for where, we don’t recommend putting them in paid-for storage. Storage lockers often contain bed bugs themselves, since some people store their mattresses and bedding there.

The bed bugs then spread from the bedding to other people’s possessions. This means that if you were mistaken and your books didn’t have bed bugs in them, you could get bed bugs from storage.

Instead, you should keep them in isolation at your own home. All you need is a plastic bin that’s big enough to house all of your books, and which has a lid that seals.

You can then store the box wherever you like, although somewhere that gets sunlight would be a good choice, since bed bugs die more quickly in high temperatures. For best results, tape the lid shut all the way around.

Putting your belongings somewhere warm is good, as is somewhere cold. If it’s the dead of winter, bed bugs in books freeze if left out overnight in the snow and frost.

They won’t die straight away, although the cumulative effect of the cold will kill them quicker than if they were comfortably indoors.

Unfortunately, this method can take many months or even a year to get rid of your infestation completely. Bed bugs can survive without a host for a year or more, especially if they’ve only recently fed. As such, if you put your things in storage, don’t expect to have them back any time soon.

Other Ways to Get Bed Bugs Out of Books

Pesticides remain a very common way of treating bed bugs. And you don’t have to rely on an exterminator to do it for you, either. You can use bed bug sprays that you can find for sale online, or at DIY stores throughout the country.

These sprays typically contain permethrin, a kind of insecticide that’s highly effective. While bed bugs are developing some resistance to it, it’s still capable of killing and repelling an infestation if used correctly.

You can buy either a ‘bed bug bomb,’ or a spray that looks like a bathroom or kitchen cleaner. Bed bug bombs aren’t a good idea, since you have to leave them in your house for several hours.

Because you can’t direct the spray, it also won’t reach inside furniture or under your bedding. As such, it’s relatively useless. A handheld spray is much more effective, and there are many on the market.

You could make your own spray. Tea tree oil is proven to have an insecticidal effect. If you do want to use tea tree oil, make sure to buy a 100% pure oil from a reputable source.

The only issue with sprays like these is that they may damage your books, so it’s up to you whether you think that’s worth it or not.

7 thoughts on “How to Treat Books for Bed Bugs”