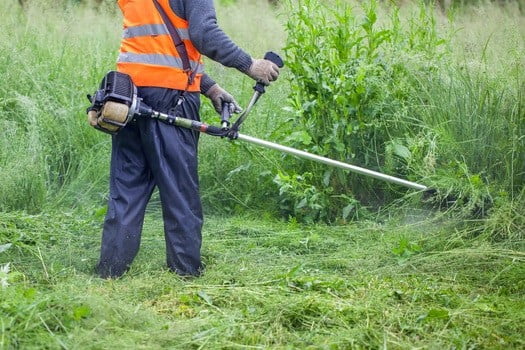 Bed bugs can’t survive in the grass because they’re an indoor pest. They evolved from bat bugs which live in sheltered caves. Nights outdoors are too cold for them to move quickly, and they die in small amounts of water. They couldn’t easily find their way back into a home, so would die. They need to be close to a host in their home because they only feed on blood.

Bed bugs are classed as a parasite like other pests that live in grass. But they’re exclusively an indoor pest, although you can still get bed bugs from other public places.

Can You Get Bed Bugs from Grass?

Well-known pests, like ticks, live outdoors and can be caught from the grass. This means you have to be careful when you go on hikes, or go traveling. Pets like dogs are also susceptible to them.

Ticks and bed bugs are similar in certain ways, e.g., that they both feed on blood. Both species drink so much that they expand their bodies. You might expect the species to be similar in other ways, e.g., their habitat. But they aren’t—the points above are where the similarities end.

You can’t get bed bugs from the grass because they don’t live there. Even if one somehow made its way outside, it wouldn’t wait in the grass for a host. They have a different host location mechanism than other pests like ticks.

Do Bed Bugs Live in Grass?

Bed bugs don’t live in grass. They are exclusively an indoor pest. They make their harborages, indoors. They stay close to their host, but don’t live on them. This means you find them in bedding and mattresses.

A bed bug won’t venture outdoors in its entire life. Its mother will lay an egg in a secluded place indoors, close to a host. The egg will hatch, and the nymph will feed as the adults do. It grows to an adult. It then mates to create the next generation. It eventually dies where it was born.

The closest bed bugs get to the outdoors is when they spread. They are typically spread when people carry them. They may hide in your belongings which you take outside.

If you were to drop the bed bug outside, it wouldn’t survive. It wouldn’t cling to a blade of grass and wait for a passing animal. This is an evolutionary adaptation of ticks. A bed bug left outside would find somewhere to hide from the sun, and will eventually die.

Can Bed Bugs Travel through Grass?

Bed bugs could hypothetically travel through the grass. Their bodies are small enough that they could fit through the blades. The area under the blades of grass would also be shaded, at least compared to above.

However, this point hasn’t yet been studied by scientists. That’s because there’s little reason to research the question. Bed bugs don’t live outside, and you don’t get them outdoors either. There’s no situation where you would encounter bed bugs in the grass.

A bed bug wouldn’t choose to travel through grass, for a combination of reasons. The light, the presence of water, and the absence of a host mean they won’t want to live there.

Instead, they would rather live indoors nearby where their host sleeps.

Do Bed Bugs Cling to Their Host?

Another reason you won’t get bed bugs from grass is that they can’t cling to you. They can hide in your belongings, e.g., your bag. They’re especially attracted to it if it smells like you.

However, they lack any mechanism by which they can cling to your skin as you move. Ticks do so by burying their heads underneath your skin. This enables them to stay in place, and makes them difficult for other animals to remove.

Bed bugs don’t feed in this way. They feed more like a mosquito than anything else. Bed bugs don’t bury their heads when they feed. They don’t have the body parts necessary to do so.

Why Can’t Bed Bugs Live Outside?

Bed bugs only infest indoor locations, and can only be caught from indoor locations. The majority of bed bugs will stay in the same place throughout their life. But why?

Bed Bugs Are an Indoor Pest

Bed bugs evolved from another, similar creature. This bug lived in caves and fed on bats. Here, they lived sheltered lives away from the bitter cold outside. They had consistent access to their hosts, too, which made their lives even easier.

Today, there are still bat bugs. They still live in caves and feed on bats. These bugs, too, won’t venture outside. Either way, bed bugs come from an evolutionary lineage of insects that stayed sheltered.

Since switching from bats to people, bed bugs have become accustomed to indoor temperatures. Even in caves, early man used fire to keep warm. Ever since then, we have kept our homes at a habitable temperature as much as possible.

This has led to bed bugs becoming weak and reliant on indoor conditions. For example, because they never go outside, they don’t know how to swim. They lost the wings their ancestors had, to fit in tighter cracks.

Both today’s bed bugs and their ancestors are photophobic. This means they’re afraid of the light. When their eyes detect any light, they scurry to find somewhere dark. There are several reasons why:

When picking a harborage, studies show that bed bugs specifically search for somewhere dark. Research in PLoS One shows that bed bugs prefer darker colors like brown and black. By looking for these colors, they are more likely to find a safe hiding place.

The same research also found that they seek out vertical surfaces. The original evolutionary ancestors of bed bugs fed on plant stems, which may be why. This behavior may also be compounded by their need to climb your bed frame. They can identify vertical surfaces even in low light.

During the day, bed bugs hide under your mattress or in another sheltered location. If they were outside, there would be more chance of them encountering the light.

Winter is Too Cold for Bed Bugs

Bed bugs have become accustomed to indoor conditions. One part of their acclimatization is the temperatures they’re comfortable with. Bed bugs thrive in comfortable indoor temperatures, whether in summer or winter. That’s why bed bugs don’t go fully dormant.

According to the Journal of Economic Entomology, bed bugs can survive reasonably cold temperatures. The scientists tested how low bed bugs can go, and were surprised at the results.

Bed bugs can survive at temperatures down to 10 Fahrenheit. This is lower than you might expect, although it does mean you can freeze them in a basic domestic freezer.

They do so through a process called cold-hardening. This is where the bed bug essentially goes dormant and waits for higher temperatures. But even in slightly cold winters, the bed bug would be unable to move quickly and find their way to your home. Winter is too cold for them.