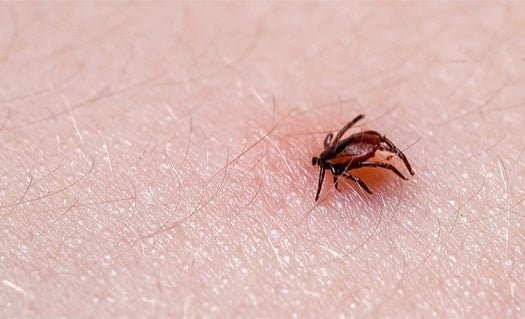 Bed bugs and ticks are about the same size, and are a red-brown color. But ticks often have white or tan spots or stripes, while bed bugs have none. Bed bugs congregate in large numbers indoors, while ticks are solitary and are usually found outdoors.

People that aren’t familiar with these bugs may believe they’re more similar than they are. We aim to help you to learn how to tell the difference between bed bugs and ticks.

Are Bed Bugs and Ticks The Same Size?

Many people believe that bed bugs are too small to see with the naked eye. However, that isn’t true. Both parasites are easy to spot if you search for them.

Bed bugs are consistently the size of an apple seed. Nymph bed bugs are smaller, and can be as small as a grain of rice. However, there are only a handful of bed bug species in the U.S.

Each species is the same size.

Ticks are variable in size. The smallest are no bigger than a pinhead, and the biggest ones are as large as a pencil eraser. Their size varies because there are many different species of tick.

Most U.S. species are around the size of a sesame seed. The American dog tick is slightly bigger, while the brown dog tick is marginally smaller. Other ticks are as big as bed bugs.

This difference is difficult to notice unless you compare a bed bug and tick side by side.

Both bed bugs and ticks grow larger as they feed. Their bodies are designed to expand so that they can eat more food. If you see a large, swollen and red bed bug, then that means it recently fed.

Most ticks swell to a similar size to bed bugs. However, one species, in particular, can grow to enormous size. The brown dog tick can become half an inch or longer after they feed. This is much bigger than its original size.

What Shape Are Bed Bugs and Ticks?

Ticks are a similar shape to bed bugs. They are the shape and size of a sesame seed. Compared to bed bugs, ticks are slightly narrower. In other words, there’s less difference in width between their top and bottom halves.

The shape of ticks is consistent across all species. But when they feed, ticks to become elongated.

Are Bed Bugs and Ticks the Same Color?

Bed bugs are a dark brown color. They become a richer blood red color when they feed. All species of bed bug in the U.S. are the same color.

Ticks are again more variable in color. They range from dark brown to reddish-brown like bed bugs. However, unlike bed bugs, they may also have markings, such as:

If the bug you’re looking at has markings, it’s not a bed bug but a tick.

How Many Legs Do Bed Bugs and Ticks Have?

Another of the differences between bed bugs and ticks is the number of legs. Bed bugs have six legs, while ticks have eight.

The appearance of their legs is also somewhat different. Ticks have two long legs which curve upwards and outwards from their head. Their other six legs are much further back on their body. These two legs assist them with moving and feeding.

Depending on the species, these two legs may also be noticeably longer than the rest. All of their legs stick straight out from their body.

Bed bugs’ legs are completely different. They only have six, and these six legs are thinner than a tick’s legs. Their legs do stick out, but aren’t as noticeable and may be partly under their body.

This difference stems from a simple fact. Bed bugs are regular insects, while ticks are a form of arachnid. So, if the bug has six legs, it’s a bed bug. Eight legs and it might be a tick.

Do Bed Bug and Ticks Feed The Same Way?

Bed bugs and ticks both feed on blood. However, the way they feed is slightly different, and looks different too.

When a tick feeds, they bury their entire head underneath the host’s skin. This makes them look as if they don’t have a head. That’s why people warn you not to pull ticks out too fast, as their head comes off.

Bed bugs sit on your skin to feed. They have a long feeding tube like other blood-sucking insects. They will scratch away at a small piece of skin to make an exposed area. They will then drink through their ‘straw,’ not putting their head under the skin.

Bed bugs also wait until late at night to feed. They know that the later it is, the less likely you will wake up and crush them. Ticks don’t wait for a particular time of day or night to feed.

So, if the bug looks like it has no head when it’s feeding, it’s likely a tick.

Another way to tell the two apart is the size of the infestation. Bed bug infestations always start with just one female. She will hitch a ride in your clothing or belongings to infest your house. She will then lay eggs somewhere safe, and the infestation starts.

These bed bugs will then live in your bedding or nearby. They live in large clusters of up to thousands of bugs. If you take measures to kill them, there are likely to be fewer than this.

According to the American Journal of Tropical Medicine and Hygiene, ticks don’t live in clusters. They are generally solitary animals that attack their hosts separately. Members of select species (like deer ticks) do aggregate somewhat, but nowhere near as much as bed bugs.

Ticks also don’t live indoors. Almost all species live in the wild. They find a host by sitting in long grass and waiting for one to pass by. This is different behavior to bed bugs, that prefer living close to their host.

Only the brown dog tick regularly lives indoors. It can complete its entire life cycle (hatching, mating, laying eggs and dying) either indoors or out. However, these individuals are solitary and still don’t cluster like bed bugs.

If you see an infestation of many bugs under your mattress or in your room, they’re bed bugs. If you see a solitary bug or two, then the problem may be brown dog ticks.

How To Tell the Difference Between Bed Bugs and Ticks

You don’t need to hire an exterminator to tell which bug is infesting your house. You can figure it out on your own. Bed bugs and ticks are sufficiently dissimilar that it’s easy.

But spotting the differences between bed bugs and ticks isn’t just about appearance. There are other ways they differ too, like behavior and habitat. Here is a brief point by point list to help you spot the difference:

If you’re still not sure, you can consult a pest control expert. They will be able to tell you definitively what your infestation is. Here’s more information on how to identify bed bugs.

1 thought on “Do Bed Bugs and Ticks Look Similar?”