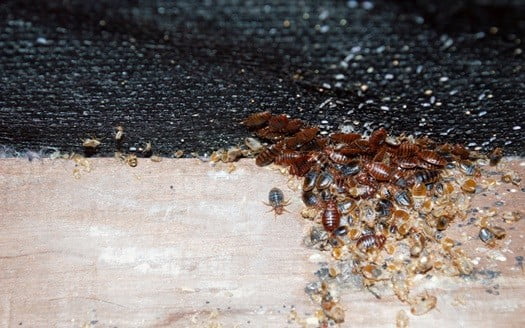 Many household pest species have wings and can fly. You rarely see them do so because it draws attention, and everything is within crawling distance.

Bed bugs can’t fly because they don’t have wings. Their evolutionary ancestors used to have wings like other bugs. But bed bugs got rid of them over time so that they could hide in smaller spaces. They still have wing muscles in their thorax, but there are no wings attached.

If you ever see a household bug flying, it’s not a bed bug, but something else. Below is our explanation of why bed bugs don’t fly and how they evolved as a species.

Bed bugs don’t fly. Think about the life of a bed bug for a moment: they spend most of the time hiding. They live in tiny cracks and crevices in your bedding, or near your bed. They don’t go outside. Predators seldom attack them, and so don’t need to escape.

When they want to feed, they find their way to you by crawling. They can get from your bedding to your open skin. They can even find you from across the room by tracking the heat you give off.

When they want to find a new host, they usually wait for one where they are. That’s why they’re so common in hotel rooms, for example. Failing that, they’ll crawl short distances or hide in things like clothes and spread that way.

At no point do they need to fly. Natural selection hasn’t given them the ability to do so.

Do Bed Bugs Have Wings?

Bed bugs don’t have wings. Their anatomy is different from that of bugs that do.

Bugs that can fly have three sections to their body: the head, thorax, and abdomen. The wings are usually attached to muscles in the thorax. Bugs usually fold their wings back over their abdomen when not in use. They may cover them with a shell, like a ladybug.

Bed bugs have a head, thorax, and abdomen. They have a shell, although it’s not solid and shiny, and can’t open like other bugs’ shells can. They also don’t have wings attached to their thorax (or anywhere else).

They do have one part of their anatomy for flying, though. They still have small muscles in their thorax where wings would usually attach. These are an evolutionary leftover.

The bed bugs’ ancestor species used to fly. But they got rid of their wings thousands of years ago. By doing so, they were able to hide in smaller cracks without their wings getting in the way. That’s why bed bugs have wing muscles, but no wings.

You won’t be able to see them with the naked eye. You’d need a microscope to spot them. But either way, bed bugs don’t have wings, and never attempt to fly any other way.

How Did Bed Bugs Lose Their Wings?

Bed bugs’ original ancestors likely would have fed on plant sap. There are still thousands of species that are similar to bed bugs which do. Some species started feeding on animals, and it’s these that bed bugs evolved from.

Bed bugs’ ancestors took to feeding on bats, and only bats. They lived in the caves where the bats roosted. Here, they were safe from the elements and had hosts they could consistently feed on.

The issue was that bats eat bugs. So, if a bat ever spotted one of these bugs crawling or feeding, it would immediately eat it. They needed to adapt so that they were safer.

To do so, they began hiding in the cracks of the caves they lived in. To do so, they learned to flatten their bodies. But their wings were still in the way. They likely got scraped off and damaged. But this didn’t matter as the bugs didn’t need to fly anywhere.

Over time, bugs that were born without wings had an advantage. They could fit in tighter gaps, and wouldn’t get hurt when crawling inside. When people started living in caves, these same bugs started feeding on us instead.

The only other way that a bed bug might ‘fly’ is through jumping. Fleas don’t have wings, but can jump high relative to their body size. This enables them to escape danger, travel quickly, and get from one host to another.

Besides that, bed bugs are too big to jump like fleas. While fleas have powerful back legs, which is how they jump so high, their size and weight is another factor. If they were bigger, their legs would have to be as big as a grasshopper’s.

Do Bed Bugs Jump at All?

Bed bugs don’t jump at all. You can see this in action when you disturb them. Lift the mattress and they will scurry away, but they’ll never fly or try to jump.

Again, it wouldn’t be advantageous for them if they could. Bed bugs live in places where they can access you easily without jumping or flying.

If anything, jumping would be a disadvantage. They could easily fall from their hiding place and have to make their way back. Instead, they rely on the adage that ‘slow and steady wins the race.’ They do nothing but crawl towards you.

Bed bugs can climb, but can’t climb any surface at will. They cannot climb smooth surfaces like glass or metal easily. That’s because there’s nowhere for them to grip.

However, they can climb rougher surfaces like wood. Wood offers plenty of places for their legs to grip and they can easily climb it. Plaster is a similar surface that may have cracks and tiny bumps in it that help them climb.

Bed bugs need to climb because they may live somewhere across the room from your bed. These bugs need to crawl their way to your bed, climb the vertical surface of your bed frame, and then find an open patch of skin.

How Do Bed Bugs Climb?

If any animal wants to climb, it needs the right tools. To climb, you need something to grip with. Animals use their feet, hooves or claws to propel themselves upwards.

Bed bugs have hook-like tarsal claws at the end of their legs that they use to grip things. As they climb, these tiny hooks find a gap in the surface to hold onto. Think about the handholds you see on rock climbing walls.

Their claws aren’t fine enough to grip onto hair, for example, but do help them climb surfaces. Wood and plaster have lots of microscopic cracks, lumps, and bumps. It’s these that the bed bug finds purchase on.

Different species of bed bug may be better at climbing than others. It’s thought that the tropical bed bug is a better climber than America’s native species. Why this might be the case is unclear.

Bed bugs can crawl across almost any surface. Again, they use the tiny hooks on their feet to give them purchase. They crawl to do anything:

They prefer crawling over flat surfaces, but can climb at an incline, or even vertically. They identify where they want to go through searching for warmth, human pheromones, and carbon dioxide. They then crawl there. They can sense these things within around six feet.

They crawl slowly compared to other pests around the home. They aren’t quick enough to escape you unless there’s another hiding spot nearby.

Rather than rely on speed, bed bugs rely on their ability to hide. They will pick a hiding spot that is difficult for any threat to access. They only come out to feed, and return there quickly to digest afterwards.