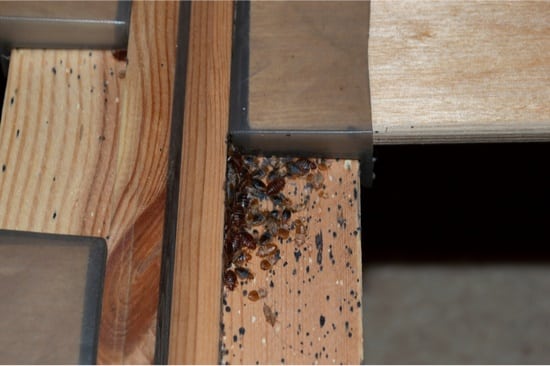 People have been searching for quick and effective ways to kill bed bugs for decades. Free methods are ideal. It seems to make sense that you could do this by depriving them of oxygen or water.

Without enough fluid and air, bed bugs will die. They don’t have lungs, but do have a series of tubes (tracheae) that pass air around their bodies. Bed bugs don’t drink water, but they get the water they need from their food (human blood.)

Water and oxygen deprivation is not an effective way of killing bed bugs. It’s hard to create enough of a vacuum to kill a bed bug, and they don’t die of dehydration before they die of starvation.

Think of any animal and you can imagine it drinking. But bed bugs don’t drink water—not once throughout their lifespan. You might think that that limits their lifespan, but it doesn’t.

According to Lab Medicine, they have mouthparts that they could drink with. Bed bugs have a mouth like that of a mosquito. It’s essentially a long, sharp straw that they use to access your blood vessels and feed. It’s easy to imagine them drinking water the same way.

But they don’t. A bed bug’s feeding reflex is only triggered by the skin. They will try to find you by the scent and warmth of your skin. If these ‘triggers’ are absent, then they won’t try to feed. That means they won’t try to drink water.

This has been a problem for scientists. If you keep bed bugs in a lab, you need to recreate the way they feed. They do this by drawing a cloth tightly over a warm jar, with blood underneath. This simulates skin and triggers their feeding response.

The reason why bed bugs have developed this way is obvious. They are an indoor pest that will never encounter rainwater, ponds, or streams. These sources of water aren’t available indoors, so they don’t rely on them.

Bed bugs don’t need to drink water to survive. They have developed not to. If they did need pure water, it would be hard for them to find it.

Bed bugs do still need fluid. If they don’t have any, they dry out and quickly die. This is how certain treatments like diatomaceous earth kill bed bugs.

However, bed bugs won’t die from thirst. They will die from a lack of feeding, but this can take longer than a year. They die as a result of a lack of nutrients, water, and ‘food’ more generally.

Is Water Toxic to Bed Bugs?

Water isn’t toxic to bed bugs. While they won’t encounter water on a daily basis, bed bugs won’t necessarily die if they come into contact with some.

If they came into contact with a raindrop, they would walk around it. They would treat it the same as any other obstacle, and be unharmed. Spraying water on bed bugs isn’t an effective treatment.

They don’t need water because they get fluid from their food. Bed bugs feed on blood. Being a fluid, blood has lots of water in it. They have evolved to survive on this amount of fluid alone.

Whether they need extra fluid also depends on their environment. If they are in a place that’s dry and humid, they will dry out. They need to feed often. And if they don’t, they would dry out.

But since bed bugs only live in homes, this precludes the chance of their home being too dry. You will keep the home relatively humid for them. If it’s too dry for them, it’s too dry for you, and you would correct that.

Moreover, when you breathe and sweat at night, you give off some moisture. This keeps the room more humid than it otherwise would be. While this isn’t much, it’s better than nothing. The more humid it is, the less water they lose through evaporation.

A bed bug’s shell is remarkable. It can stretch to many times its original size, to accommodate more food. This, in itself, is interesting. But their shell also helps them hold onto water.

It does so because it’s coated in a waxy substance. This layer isn’t thick, but it has developed over millennia to assist bed bugs’ survival. It helps stop evaporation from inside. You can scrape this layer away with diatomaceous earth.

It also serves a protective function. Studies have shown that their shells are becoming thicker so as to counter pesticides. This is making pesticides less effective.

Despite being so small, bed bugs do still need to breathe. Without oxygen their brain, nervous system, and internal organs would cease to function correctly.

That being said, bed bugs don’t have lungs like humans. Instead of lungs, bugs have a network of tiny tubes called tracheae. They bring air into this system through a series of holes along their abdomen. Not through their mouth.

These tracheae branch off into smaller and smaller tubes. This is comparable to our circulatory system, which has big veins and arteries, but tiny capillaries, through which the blood reaches every tiny part of the body.

They only take in small amounts of oxygen at a time. That’s because they’re so small that they require hardly any. But just because they only breathe a tiny amount, that doesn’t mean they don’t breathe at all.

Does a Lack of Oxygen Kill Bed Bugs?

It is possible for bed bugs to die because of a lack of oxygen. All animals experience the same issue when they can’t get oxygen. Animal cells begin to die quickly if there is no oxygen to sustain them. This applies to bed bugs, just like us.

That being said, it’s difficult to get rid of the air around them to the point where they can’t breathe. That’s because they require so little that there’s almost always enough. This especially applies because bed bugs find places to hide.

Vacuum packing is a good example. You might think that vacuum packing your laundry would kill bed bugs. But it doesn’t. When you compress fabric, it folds and wrinkles. You can see this when it happens.

Because of these folds, there are still tiny pockets of air inside. Bed bugs can hide in these and survive for a long time.

This has been proven many times by people trying to kill bed bugs with vacuum packing at home. It doesn’t kill them soon enough to be worthwhile. If you were to leave them for months, they might die eventually.

But that’s just as much to do with isolation, i.e., taking away their food.

How Long Can Bed Bugs Survive without Oxygen?

If you leave bed bugs without oxygen, they will die as soon as any other animal. It will take a matter of minutes until their brains and bodies deplete their oxygen reserves. They will then die.

However, this is almost impossible to do in practice. You would need a scientific instrument, one which makes perfect vacuums, to achieve this. At home, the best you can hope for is a vacuum pack. But there will still be enough oxygen inside for them.

Moreover, bed bugs hide furniture and mattresses. These items can’t be placed in a vacuum pack. Even if they’re bagged in an airtight bag, there would still be more than enough air.

Using a vacuum is an ineffective method of bed bug control. You should consider alternative ways of killing bed bugs, such as:

Aside from these two methods, no foolproof way of killing bed bugs exists.

1 thought on “Do Bed Bugs Need Oxygen and Water to Survive?”