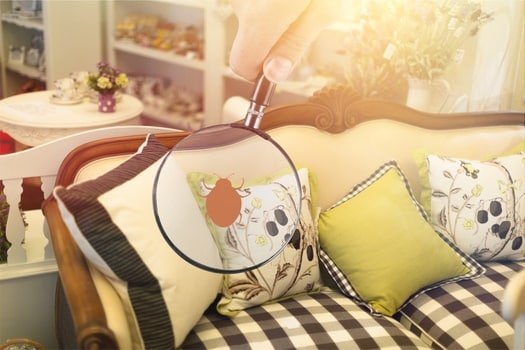 You think that you saw a bed bug. But it was the middle of the night, it was dark, and you might have been dreaming. Maybe it’s a flashback from a previous infestation, or perhaps it’s the real thing. So, you need to check if you have bed bugs when it’s light outside and you’ve had more sleep.

You have to identify their most likely harborage, which is usually under the mattress or box spring. Anywhere that they’re unlikely to be disturbed, and where they can hide away from the sun, is a likely spot. If you were to lift the mattress, they would scatter and try to get away.

If you already know that you’ve got an infestation, then there’s little point searching for your bed bugs. Finding and squishing bed bugs is a pointless activity. It’s far better is to use traps and sprays (contact killers), or get in touch with a professional bed bug removal company.

Can You See Bed Bugs with the Human Eye?

They’re not hard to spot, and they’re not easily confused with any other kind of bug. According to a paper in Clinical Microbiology Reviews, this is what they look like:

What might have led people to believe they aren’t visible to the naked eye is that they don’t often come out during the day. They prefer coming out at night, when it’s easier to bite and draw blood, because you won’t disturb them midway through. As such, you don’t see them all that much.

Where Do Bed Bugs Hide Their Eggs?

Bed bug eggs are visible to the naked eye, too, although they’re more difficult to spot. They’re a white or off-white/yellow color. Bed bug eggs look like miniature grains of rice, about the size of a pinhead. They’re typically laid in clusters, though, which makes them easier to spot.

According to the University of Minnesota, bed bugs like to lay them in places that they won’t be found by other insects, so they won’t be eaten. As such, you should look for them in the same places you’re likely to find adult bed bugs, like underneath your mattress.

Can You Spot Bed Bugs When They’re Hiding?

During the day, bed bugs prefer to spend their time hidden. Their wide but flat bodies allow them to hide in cracks and crevices where it’s difficult to get at them. But you can still see them most of the time. For example, any bed bug that’s hiding in the piping of your mattress will be half inside the crack, and half outside.

If the bed bug harborage is in a crack in the wall or floorboards, you won’t be able to spot them. But you don’t have to find every single bed bug to get rid of an infestation.

By far the best way to kill them is to use traps and lures, so that they come to you. Finding them isn’t all that important.

Are Bed Bugs Active During the Day?

During the day, bed bugs will spend their time digesting their food. If they’re not digesting, then they’ll wait until the evening and night when it’s safe to come out and feed again.

Only on rare occasions will they become active during the day, especially if they’re threatened. If you were to flip the mattress and expose them to light, for example, they wouldn’t just sit there. They’d try and get away from the light.

If you want to find bed bugs during the day, there are a few ways to do so. But it’s important not to go in, all guns blazing, rampaging into tables and chairs and hunting for bed bugs. If you do, then you might encourage the bed bugs to spread, which is the last thing you want.

We’ll know detail where you can expect to find bed bugs. Then, we look at each place you can find them, and how to go about searching for them without disturbing them too much.

Where Do Bed Bugs Hide During the Day?

Bed bugs will hide anywhere that’s dark and difficult for anything else to access. The most obvious example is underneath a mattress.

The main reason why these places are so popular is that they’re dim, and close enough to you that they don’t have to travel far to feed. The longer you leave them undisturbed, the bigger the infestation will get, as they breed and lay their eggs.

Lift the Mattress and Look Underneath

The best way to find bed bugs during the day is by lifting or flipping your mattress. The majority of bed bug infestations live in the mattress, rather than anywhere else around the room.

Generally speaking, an infestation wants to be within six feet of where you sleep. Being so close means that they don’t have to go on dangerous trips to find you, crossing the floor and getting lost.

As such, you can lift the mattress to see if you can find any. Doing so is simple:

You should also look for fecal staining, which is caused by the dark black digested blood that bed bugs leave behind when they go to the toilet. There may also be fresh blood, which is from just after they bit you, where a drop fell from their beak or your spot.

There are also cast-off shells. These are left behind as the bed bug grows up. They’ll shed their shell every once in a while, until they become an adult. Because they’re made from nail-like material, these shells don’t decompose or turn to dust. As such, you’ll find some of these too.

Inspect Furniture Near the Bed

Checking nearby furniture is also a must. A bed bug will typically choose the mattress over anywhere else, but if you’ve just brought some bed bugs home, then they might have headed off in a few different directions. In particular, pay attention to any furniture that’s made of wood. Wooden furniture has cracks and joins that bed bugs love to crawl into.

To inspect furniture for bed bugs, follow the same rough procedure as above.

You should know that bed bugs don’t typically infest nearby furniture before they infest your mattress. So, if you checked your mattress and couldn’t find any, you probably won’t find any in your bedroom furniture.

If there are any in your furniture, these usually are particularly hard to kill. Most people with bed bugs throw away their furniture when they move.

Inspect Other Furniture Throughout the House

Your couch might have some bed bugs in it. This is especially the case if you take regular naps on your couch, and especially if you sleep on it at night.

If you bought your couch from somebody else, or got it from a friend or neighbor, the odds of there being bed bugs in it are even higher. To check a couch for bed bugs, follow the same procedure:

It’s unlikely that there will be any bed bugs in your couch. That’s because they don’t usually get a good chance to feed unless you sleep there. When you’re awake, and it’s light outside, they normally won’t try to feed.

If there are bed bugs in your couch, then it means you’ve got a severe infestation. Again, bed bugs in furniture are hard to get rid of, so most people throw their sofa away and get a new one when they move. If you aren’t moving, you’ll have to try your best with sprays and traps.

Use Traps to Capture and Kill Bed Bugs

You can also use traps to catch and spot bed bugs during the day. There are two kinds of traps. The first is passive traps, which passively collect bed bugs, i.e., without luring them in.

A passive trap sits somewhere that bed bugs are likely to walk through. They can get in, but they can’t get out. The best kind of passive traps fit around the legs of your bed, and have a little bit of water in them. Bed bugs quickly drown in even a small amount of water.

Active lures draw bed bugs in. They use carbon dioxide and warmth to pretend to be a sleeping host. The bed bug clambers on in, searching for a meal, but can’t get out. Again, they may be filled with water to kill the bed bugs off.

You could use one of these traps to find bed bugs in the daytime, and see how many there are around. However, you’re unlikely to catch many when the sun is out. Do bed bugs come out in the light? Not really.

Bed bugs only typically fall prey to traps during the night, when they’re searching for a meal. But either way, traps are a great way of finding bed bugs without having to do all the work yourself.

Bed bug sniffer dogs are specially trained to hunt for bed bugs. They’re best used in circumstances where you’re confident that your room has bed bugs, but you can’t find them.

This can easily happen if they’re hiding in cracks in the wall, for example. Sniffer dogs work at about a 90% accuracy rate.

Not every dog can sniff for bed bugs. They have to be specially trained, like show dogs or service dogs. The easiest way to find one is by searching for service dogs online.

If you do discover you have bed bugs, don’t drive yourself crazy searching for them. Make it hard for them to feed at night by spraying the part of the mattress they call home, or using traps to stop them getting near you.