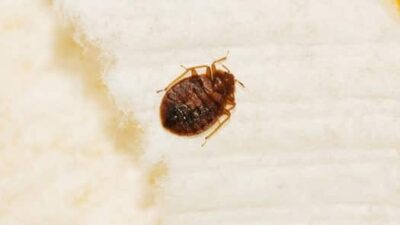 The only good bed bug is a dead bed bug. Whether you want to squash a bed bug in your hand, use a handheld spray, or hire an exterminator, the sooner you take action the better.

If they fed not so long ago, the bed bug will burst and leave behind a crushed bed bug stain. They’re soft and easy to squash, like a cooked bean or a pea. Nymphs (young bed bugs) are also much easier to squeeze. But if they haven’t fed, they’re much more difficult to squeeze.

Ideally, you should avoid squashing bed bugs. If you succeed, they’ll bleed and leave a nasty stain. Killing every bed bug you squeeze leaves behind many more that will continue to breed.

I Squished a Bed Bug and Blood Came Out

Do bed bugs pop when you squeeze them? Whether you can squeeze a bed bug or not depends on whether they’ve recently fed. A bed bug that hasn’t fed for a long time has a hard shell, which makes it difficult to squash. But if they’ve just fed, you can pop them easily.

In fact, you might have noticed this happen before. Have you ever woken up in the morning, knowing you’ve been bitten by bed bugs? And when you lift the sheet, there’s a big smear of blood—not just drops, but quite a lot? That’s what happens when you squash a bed bug that’s just fed.

Do Bed Bugs Have Hard Shells?

Bed bug shells are relatively rigid. That’s because their shell is an ‘exoskeleton.’ Insects have a hard casing that acts almost as the human skeleton does. It gives their body structure, and is hard enough to last through a fight. The fact that it’s inflexible is why they have to shed their shell so frequently throughout their lives as they grow.

However, the rear section of their body is more flexible. It has to be that way. When they feed, the back half of their body expands so that they can drink more and more. It would be like if your belly could expand to a hundred times the size when you ate. To accommodate all their food, this rear part of their body is nowhere near as rigid, which makes it easy to burst.

After they feed, then, they become easy to pop. Before they feed, their shells are almost like a fingernail, which makes it tough to crush them. But once they’ve fed, they’re about as easy to squash between your fingers as a cooked bean or pea. Nymphs are even easier to crush, because they haven’t yet developed a thick shell.

Can You Crush Bed Bug Eggs?

They squash just like young bed bugs do, and it doesn’t take much effort.

The only issue is that bed bug eggs are difficult to pick up from or scrape off of a surface. That’s because bed bugs lay their eggs somewhere hidden, so that the eggs won’t be disturbed. And when they lay them, they use a glue-like secretion that will cement them in place on fabric, wood or other material. This makes it difficult to pick them up to squash them.

However, if you do want to squash bed bug eggs, you can squash them where they were laid. Take a tissue and pinch it over the egg. That should be enough to crush them. However, it’s important to emphasize that killing bed bug eggs by squeezing them is inefficient. You should use a spray instead, because it takes much less time and is effective against adult bed bugs too.

Ideally, you should avoid crushing bed bugs so that you don’t make stains like these. But if you wake up and you’ve crushed a bed bug by accident, there isn’t anything you could have done to avoid that. If that’s the case, go through the following procedure.

You might find that even this won’t get the stain out. If nothing you try works, don’t waste any more of your time. Just buy new sheets.

Do Bed Bugs Smell When You Kill Them?

Bed bugs use smell to help them understand the world. Part of what lures them to you, for example, is the smell of your skin. And to help themselves find their way back ‘home’ again, i.e., the underside of your mattress, they surround the area with a strong and unique scent. But what about when you kill them, do they produce a scent then?

Bed bugs use ‘alarm pheromones,’ which they release when they sense they’re in danger. They’ll release them when their harborage is exposed, for example, by you flipping the mattress over. The point is to ‘tell’ other bed bugs that something bad is happening, so they better run. This helps as many as possible to escape before they’re caught or eaten.

Their alarm pheromones smell similar to their regular scent, but contains different chemicals that the bed bugs can pick up on. According to Scientific American, the smell is like coriander, or like something moldy (like clothes that have been in the washing machine for too long).

If they’ve just fed, there’s another smell that you might notice. That’s the smell of blood. Blood smells both sweet and metallic. It contains sugars and iron, which is what you’re smelling. As it takes a while for the bed bug to digest the blood they take from you, it will still smell ‘fresh.’

Can You Pop a Bed Bug Bite?

Bed bug bites and other insect bites are different from spots. These spots are caused by an allergic reaction, where the area around the bite swells up. This is known as the histamine response.

It’s caused by the small amount of saliva that the bed bug uses to numb the area that they bite. This causes white blood cells to flow to the area, just like a pimple.

However, there’s one key difference. With a pimple, the pressure builds and builds because the pore is blocked by something. That’s not the case with a bed bug bite. The pressure can’t build up, which means that there’s nothing to pop.

Some people have reported that squeezing the bite forces a small amount of whitish fluid/pus from the wound, similar to a pimple. That’s caused by the white blood cells. But doing that won’t make the bite pop or go away.

Other Bugs That Bleed When Smashed

I squished a bug and blood came out. Many bugs bleed when you squash them, although none are easily confused with bed bugs.

You’re much more likely to notice blood if the insect you squash is one that feeds on the stuff. That includes:

None of these insects look much like bed bugs, except ticks. When ticks feed, the rear half of their body expands, just like the bed bug’s rear half does. You can squash them, too, if you want to get blood all over your hands.

To be clear, these bugs don’t bleed when you squash them. Insects don’t have blood like humans. They have hemolymph, which does the same jobs as blood does in mammals. It isn’t red. Instead, it’s a blue-green color, because it contains copper rather than iron.