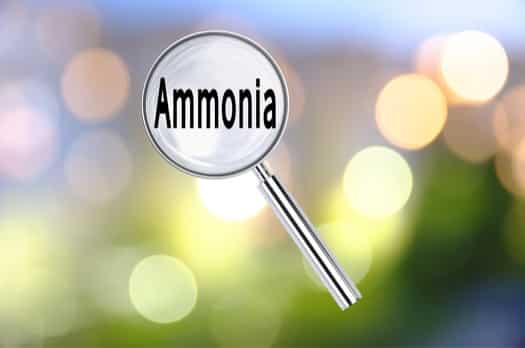 Most people pay professional exterminators to kill bed bugs, but their services are expensive. That’s why home remedies, such as ammonia, are favored for eliminating bed bug infestations.

Ammonia destroys the outer layer of their shells and kills bed bugs on contact. The same mechanism means that it can also destroy any eggs you spray ammonia on. But it only works on contact, so it isn’t as effective as pesticide sprays.

Ammonia has been used for centuries around the home. But just because it’s been in use for that long, doesn’t mean that it’s an effective solution. There are better home treatment options available, but you can get good results with ammonia for bed bugs.

Ammonia is a chemical that’s used in many cleaning products. It has a distinctive smell, which is described as similar to either urine or fish. It’s extremely pungent.

The vast majority of ammonia produced by industrial concerns is used in fertilizer. But around the home, it’s used in cleaning sprays and similar products. It breaks down oils, grime, and dirt.

Ammonia causes damage to surfaces if it’s heavily concentrated. When it comes into contact with moisture, it breaks down water molecules to create ammonium hydroxide. Ammonium hydroxide is highly corrosive.

The fact that it’s corrosive means that ammonium hydroxide starts to break down tissues. It destroys cell membranes that it comes into contact with, leading to cellular destruction. The more cellular destruction that occurs, the more water becomes available, and the damaging process continues.

Ammonia also deodorizes your mattress, cleaning away the scents that bed bugs produce.

Since it works on contact, ammonia can destroy bed bugs eggs. It breaks down the surface of the eggs, which contain water. The inside of the eggs contains water too. This corrosive action irreparably damages them.

The only issue is that you have to spray the eggs directly. Bed bugs do everything they can to lay their eggs somewhere they can’t be found or accessed easily.

If they lay the eggs in a crack that you can’t spray, then ammonia would be ineffective.

How to Use Ammonia to Get Rid of Bed Bugs

If you already have some ammonia in your cleaning cupboard, you can start this process today. At most, you’ll have to buy a basic spray bottle and some rubber gloves.

You have to be mindful of the effects that ammonia can have on you. It can severely damage your respiratory system if inhaled. It can also cause damage to skin and eyes on contact.

You have to take safety measures to prevent these problems. Wear rubber gloves to avoid physical contact with your spray. If you have a mask to stop yourself breathing it in, wear that too. Otherwise, cover your mouth with a scarf or similar.

You should also open the window in the room that you spray. This will prevent ammonia from building up.

You have to make your ammonia spray. It’s vital that you don’t mix ammonia with anything but water. Combining it with other cleaning products could create toxic gases.

You’ll need a spray bottle. Don’t reuse one that used to contain other cleaning products. Even just residue from another product could create harmful gas. Take one that’s only ever contained water, or if possible, a brand new one from a store.

You may find that you already have a cleaning product that contains ammonia. If that’s the case, then you can use that.

Dilute the ammonia to the amount specified on the bottle. Using too high a concentration could damage your furniture. Too low a concentration wouldn’t have an effect. So pay close attention and figure out how much you’re supposed to use.

3) Seal the Entry and Exit Points

Bed bugs run away quickly when you disturb them, because they’re alarmed. If you flip the mattress they’re under, they’ll run as quick as they can to find somewhere else to hide.

So, before you spray anywhere in the room, you have to seal it up so that the bed bugs can’t spread elsewhere. This means sealing or otherwise getting rid of cracks like:

If you can’t seal these spots up, then you could make them less appealing by spraying them beforehand. That would work too.

4) Identify Where Your Bed Bugs Are Located

Bed bugs hide in bedding and under mattresses. Lift the corner of your mattress to check if there are any bed bugs there. If there are, you’ll see them immediately. Bed bugs are the size and color of apple seeds, and move quickly when disturbed.

If they aren’t under your mattress, check:

If they aren’t here, then you might not have any bed bugs. If so, we recommend setting small traps (monitors) which will catch the one or two that might be there.

When you check under the mattress, don’t flip it completely. Just lift the corner and avoid shining a torch under there. The point is to avoid disturbing them. You want to catch them by surprise.

Once you’ve prepared the room, expose their harborage and begin spraying hard and fast. The bed bugs will immediately start trying to get away. The quicker you spray, the more you’ll kill.

Start with the bed bugs directly in front of you on the mattress. Spray them directly. They won’t die right then and there, because ammonia doesn’t kill them immediately. Even pesticide doesn’t.

Once you’ve sprayed each of these bed bugs, look for others. Some will have tried to get away, and perhaps on the carpet. So, look around and spray any others that you see.

6) Wipe Down the Bed Bug Harborage

Once you’ve sprayed every visible bed bug, clean their harborage. Spray it several times with the same spray, and wipe it down with a damp cloth.

Bed bugs communicate through scent (pheromones). By wiping their harborage, you get rid of the scent that tells them it’s their home. You also get rid of any feces, dead bed bugs and shells that might contribute to the overall smell.

You should also spray and wipe down their harborage to kill eggs. Bed bugs lay their eggs in cracks, like under the fabric piping on the edge of a mattress, or under buttons. Spraying and wiping these area kills the next generation of eggs is crucial.

Unfortunately, just spraying the bed bugs isn’t enough to completely get rid of them. It’s more than likely that you missed one or two of them. Or, you might have missed a few eggs. These further control methods account for that likelihood. They include the following:

You don’t have to make any of these purchases, but they will make your life easier. Monitors especially are cheap but perform a vital function. If you kill the infestation you have, they can completely prevent another one occurring.

Just because you’ve done it once, don’t consider your job done. You should spray every week at least, until the infestation is all but gone.

Bed bug infestations can get out of hand in a matter of weeks. If you spray every week, you gradually kill all the adults. As you spray continually, all that is left are nymphs and juveniles.

Nymphs and juveniles still have to feed, so you will still be bitten. But they can’t breed, so the infestation gets smaller and smaller. Over time, their numbers approach zero.

Ammonia can reduce the itchiness of a bite. According to a paper in the journal Acta Dermato Venerealogica, ammonia has been scientifically tested on bites.

The study looked specifically at mosquito bites, and what could be done to make them less itchy. The scientists found that:

It should be emphasized that this study looked at an ammonium solution. This is ammonia diluted to a concentration of between 1 and 3% in water. Pure ammonia is corrosive, so it wouldn’t work.

While this study only looked at mosquito bites, it would work for bed bug bites too. Bed bug bites and mosquito bites are essentially the same. After both, small spots form because of the body’s immunological reaction. Ammonium solution reduces that reaction.

Should You Use Ammonia to Kill Bed Bugs?

There are various reasons why you should avoid using ammonia to kill bed bugs. It causes health issues if used regularly or in high concentrations. Reasons not to use ammonia include:

But those aren’t the most important reasons to avoid using ammonia. Let’s take a look at what the health risks of it are.

Ammonia is powerful, and like other powerful chemicals, does have side effects. It has negative effects on contact, but also when inhaled or ingested.

If you plan on using ammonia for bed bugs, no doubt you’ve also considered using bleach. Or maybe you are using both. They’re two well-known cleaning solutions, after all.

You should never mix ammonia and bleach. If you do, you create chlorine gas. Chlorine gas was one of the first poison gases used in warfare, indicating just how dangerous it is. Breathing it in makes it very difficult to breathe, and can kill you.

Some online guides unwittingly tell you to mix ammonia with other cleaning products, which goes to show how easy it is to do something dangerous by accident. You could even spray a surface with cleaning spray that was previously sprayed with ammonia, thereby creating hazardous gases.

If you do accidentally create chlorine gas, leave the room. Call the emergency services immediately, as the effects of chlorine gas can increase in severity very quickly.

So, is ammonia good for bed bugs? These health concerns, plus the fact that it only kills on contact, means it’s a subpar solution.