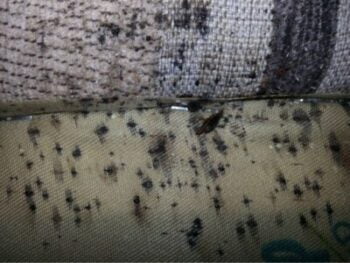 Bed bugs leave behind a few signs that they’re infesting your home. You may see the bed bugs themselves, although they don’t like to come out during the day. You may also feel small itchy bumps on your skin in the morning, signs you’ve been bitten. And there are bed bug droppings.

Bed bug poop is dark brown or black, and leaves behind ink-like stains. If it isn’t absorbed by the fabric, it leaves small and smooth drops that are easy to smear. As a stain, it’s easy to confuse with dirt or ink.

Confusing bed bug feces with dirt is easy. But if you know what you’re looking for, you’ll soon be able to tell if you’ve got a bed bug infestation just from the excrement that they leave behind.

How to Identify Bed Bug Poop

Bed bug droppings are digested blood. Bed bugs only ever eat blood, and in similar quantities each time they feed. Their poop is consistently the same size, shape, and color.

However, there’s no better way to learn what bed bug feces looks like than looking at a picture. Take the time to study what it looks like, and you’ll be able to tell it apart from dirt and stains easily.

What Does Bed Bug Feces Look Like on Sheets?

You’re not likely to find droppings on the sheets around you. There’s a good reason for that. Bed bugs take a long time to digest, several days at least. Once they’ve fed, they’ll scurry on to their harborage, which is typically on the underside of your mattress. Once there, they’ll digest in peace.

Since they won’t catch any diseases from the stuff, they don’t mind leaving their droppings nearby where they live and digest. You’re much more likely to find bed bug droppings around the corners of your mattress (or wherever the majority of your infestation lives).

If you do find some on your sheets, it will appear like small ink spots dotted around you. The dots will concentrate on the paths that bed bugs are likely to walk.

So, if the main bed bug harborage is under the top left corner of the mattress, then the majority of their droppings will be around that area too.

Bed bug droppings on your mattress look the same as those on your sheets. Again, it will smear if it’s still wet. If it’s dried, then it will have been absorbed by the fabric of the mattress.

It’s easy to identify because it appears in clusters, as bed bug feces on mattresses is always close to their harborage.

The majority of feces is likely to be near their harborage, under the mattress or sheets. According to a paper in Clinical Microbiology Reviews, feces is a well-known sign that a bed bug harborage is nearby. If you’re looking in the right place, there are a few other signs of bed bugs, too.

There will likely be several bed bugs nearby, hiding in mattress piping or underneath a button or zip. There will also be old shed shells, which are left behind when the bed bug grows up and grows a new one. These don’t rot, they dry up, so they can remain there for some time.

Can Bed Bug Droppings Be Picked Up?

Bed bug droppings can’t be picked up because they aren’t solid like mammal droppings. They’re more liquid, and are soft enough that any attempt to pick them up would smear them, almost like toothpaste. Again, though, it will soak into the fabric before you get a chance to pick it up anyway.

They’re also not big enough to be picked up. They’re the size of small crumbs, which means that you would struggle to pinch them and pick them up anyway.

The only exception is if they’re on a surface that doesn’t absorb them, and they’re left to dry for an extended amount of time. If they’re left on non-absorbent wood, for example, they’ll turn hard and dry. You may then be able to sweep them up if the area is easy to access.

Whatever the case, you don’t want to pick up the droppings to get rid of them anyway. Far better is to leave a cleaning solution to soak into the area they’ve been left, before wiping them away. This leaves the area bacteria-free, and gives a better overall clean anyway.

Bed bug poo doesn’t smell like the poo of other animals. It has a distinctive rusty smell, which is the result of it being digested blood.

You’ll recognize the scent from times you’ve cut yourself, or had a scab on your knee. However, this smell is easily overpowered by the other smells that bed bugs create. Bed bugs use smells to navigate their way around the world, so their harborage gives off a strong scent.

If you lift the mattress, then, you won’t smell feces (or the rusty smell we described above. Instead, you’ll smell a musty odor which has hints of coriander.

Other people compare it to a wet, moldy smell, like if your clothes were left in the washer for too long. Underneath that, you might smell a hint of rusty-blood smell, but it’s not likely.

Bed bugs primarily give off this scent when you disturb them, e.g., by lifting the mattress. You will also notice it more clearly if you have a large infestation.

If you’re noticing spots, they may not be bed bug droppings. There are two other stains that bed bugs leave behind. The first are small bright red droplets of a similar size, and often in a line.

These are small stains left behind by fresh blood, which dropped from their mouth as they crept back to their harborage. These spots are a brighter red than their droppings, since they haven’t been digested. You can find them anywhere on your sheets, from right beside you to the sides of the bed.

Alternatively, you may notice larger stains. Again, these are bright red, but they may be irregular. These stains only appear on the sheets next to you, on one or other side of the bed.

These stains are left behind when you accidentally crush a bed bug in your sleep. Bed bugs are very easy to crush after they’ve just fed, and if you roll over and pop them, they’ll leave behind the fresh blood they’ve just ‘eaten.’ You may also notice the bed bug nearby, or you may have brushed it away over the course of the night.

If they aren’t from bed bugs, then there are other possible sources for spots like these. Fleas are small black spots that show up clearly against the white of a sheet.

If the black spots are moving, then that’s what they’ll be. They could also be regular ink spots, like from a ballpoint pen that you left on your bed.

Or it could be bed bug feces or dirt. If you don’t know what the spots are, then do some basic bed bug searches to see if you can find further signs of infestation.

Does Bed Bug Feces Wipe Off?

Bed bug fecal stains don’t just wipe away. While the substance is thicker than fresh blood, their feces isn’t solid like that of mammals.

That being said, it is possible to clean up. Take a warm cloth and a small amount of dish soap. Dampen the area and leave it to soak. You should be able to wipe away the worst of it, if not all of it.

But we completely understand if that doesn’t feel clean enough for you. So let’s find out in more detail how to get rid of bed bug droppings!

Bed bug feces doesn’t smear if it’s left on a surface that will absorb it. The only issue is that bed bugs practically never leave their droppings on anything other than fabric.

If they don’t poo near their harborage, i.e., on the mattress, then they’ll leave their droppings on the sheets next to you. If they’re walking around when they do, then they’ll poo on the carpet.

When they poo on fabric, you won’t get a chance to smear it. It absorbs readily, and leaves behind a black stain. There’s simply nothing left to smear. Imagine if you let a small amount of ink dry on fabric: it would dry within a few minutes, at which point you wouldn’t be able to smear it or wipe it away. Bed bug poo is the same.

The only exception is if they live somewhere that isn’t your bed. Bed bugs can live in electronics, in wooden furniture, on/in plastic toys, or behind the sideboard.

If they live somewhere like this, then their feces won’t be absorbed. It will sit on the surface as a small, smooth inky black ball. If you were to rub it, then it would smear. However, it may have entirely dried in the time before you found it, in which case it will be solid.

How to Clean Up Bed Bug Feces

You can try to get rid of it using dish soap. You have to wet the area first, in order for it to soak into the material sufficiently to loosen the feces from the fibers. If the feces hasn’t stained deep enough, this may well be enough to lift the stain completely.

Since you probably aren’t worried about bleaching your white mattress, you can use a hydrogen peroxide solution to loosen the stains before wiping them away. Follow the instructions on the label in order to dilute it to the correct concentration.

Alternatively, you could leave it. It won’t make you ill if you leave it there. If you’re not bothered by the idea of the bed bugs and their poo still being on your mattress, you could give it a brief spray and a wipe down before putting your mattress in an encasement. You won’t be able to see, smell or touch their droppings, and the bed bugs won’t be able to bite you.

2 thoughts on “What Does Bed Bug Poop Look Like?”