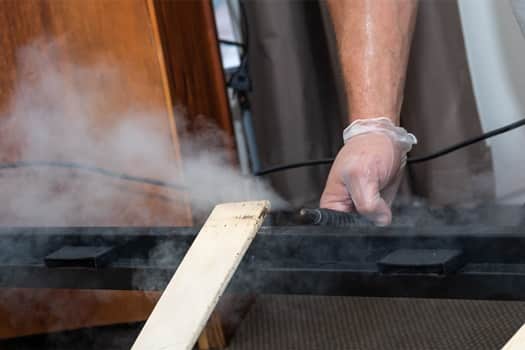 If you’ve had bed bug treatment, there will be dead bed bugs around. But what if some of those bugs aren’t dead, but pretending? Other bug species are known for playing dead.

Bed bugs don’t know how to play dead. If you ever see a bed bug that’s entirely still after being disturbed, it is dead or dying. Dead bed bugs may also be on their backs and shriveled because they’ve dried up. Living bed bugs will scurry away when disturbed or in the light.

Bed bugs don’t produce any toxins, so they can be eaten. They have no defense mechanisms whatsoever. Their only way of defending against predators is to hide, which they are good at.

How Do Bugs Play Dead?

‘Playing dead’ is a term that means pretending to be dead. Also known as ‘thanatosis,’ the point of playing dead is so that a threat leaves you alone. This is a behavior common to many species of insects and mammals.

Bugs have a specific way of playing dead. When threatened by a predator, they become rigid and still. If they are on a surface, like a leaf or a branch, they will usually fall off.

According to Behavioral Ecology and Sociobiology, this is an effective means of protection. Even if the threat can still find them, they may lose interest if they think the bug is dead. Food that’s already dead may have gone bad, or may have been left for a reason.

Some bugs have other ways of preventing predators from eating them. Stink bugs are an example. Rather than play dead, these bugs release an odor that smells like coriander.

These are known as defense mechanisms. They assist the bug in that they help it avoid a predator. If the mechanism is successful, then the bug stands another chance of finding a mate in the future. That’s how natural selection works.

If bed bugs could pretend to be dead, then they could avoid threats too.

There is no evidence to suggest that bed bugs play dead. No scientific studies have been done on the topic. There is also little anecdotal evidence either.

What may be confusing is if you’ve had a pest controller spray your property. Afterwards, there will be lots of dead bed bugs. But not all will be dead. The spray takes a long time to kill every bed bug.

As such, there will still be some living ones around. These aren’t bed bugs that are still, dead-looking bed bugs from before. They are bugs that were hidden during the initial spraying.

However, there’s good news. Once these bed bugs come out from their hiding place, they come into contact with the residual pesticide. This will kill them over time.

It’s easy to see how playing dead could assist bed bugs after the pesticide is sprayed. If you see bed bugs running around after treatment, you’ll want more treatment ASAP

However, bed bugs increase their activity when sprayed with pesticide, not the other way around. When a pesticide is in the vicinity, the bed bugs scurry around and seek out new places to hide.

This reaction is caused because it helps the bed bugs survive. They are reacting because they sense something toxic in their environment. In response, they try to move as quickly as they can to somewhere new. This is the opposite of playing dead.

It can take several weeks, but eventually, all the bugs will be dead. They won’t be pretending. At this point, clean them up with a vacuum or a brush.

Do Bed Bugs Have Defense Mechanisms?

So, bed bugs don’t play dead. They also don’t have any other defense mechanisms.

They can’t release foul odors. Bugs that do so have special glands in their abdomen to create their unique scents. They secrete this odor when threatened, and get it all over themselves at the same time. This stops them being appetizing.

Bed bugs don’t have any such gland in their abdomen. Instead, their abdomen is designed to hold as much blood as possible. There isn’t much room for anything else.

Some bugs are also toxic when eaten. Their bodies contain poisons that taste terrible and could even cause severe damage. They usually show off their toxicity with contrasting colors like red, yellow, and black.

Bed bugs aren’t toxic when eaten. Any animal that happily eats bugs can eat bed bugs. The only reason they don’t is that bed bugs are hard to find when they live under your bed.

The only thing they have in their favor is that they’re good at hiding. Bed bugs can flatten their already-flat bodies to hide in the thinnest of gaps. They hide in places like these to escape potential predators and threats.

Natural selection has never allowed bed bugs to learn how to pretend to be dead. Their evolutionary history hasn’t enabled them to.

Bed bugs evolved from bat bugs. These bugs look the same as today’s bed bugs, and are almost the same biologically speaking too. They live in caves and feed on bats instead of on people.

Unfortunately, bats eat insects. If a bat ever found a bat bug, it would eat it instantly. That applies even if the bug had been feeding, and is still.

The bug could potentially have played dead and dropped to the floor of the cave. However, it may not have been able to find its way back. Bat bugs/bed bugs detect heat and carbon dioxide to find their host. But they can only effectively do so within six feet.

Today’s bed bugs also don’t find any advantage in playing dead. If a person sees a bed bug, their first reaction is to try and squash it. That applies whether the bug is dead or not. Even if it is dead, they will vacuum it or get rid of it some other way.

Other Insects That Play Dead

Many other insect species do practice playing dead. They include:

When disturbed, these bugs may play dead in different ways. Some become rigid and stiff as if they’re dried out. Others aren’t rigid, but do become still. They will even let go of a leaf or a branch and drop to the ground in their act.

How to Tell If Bed Bugs are Dead

The primary way to tell that a bed bug is dead is through its movement. Any moving bed bugs are alive. One that isn’t moving, even when disturbed, is probably dead.

Bed bugs are still for hours, even days at a time while they digest. That’s because they know they’re safe in their hiding place. They sit still to digest their food, and shed their shell. Throughout this time, they may not move much at all.

But when disturbed, the bugs have to find somewhere new to hide quickly. That’s because:

If you disturb the bed bugs, any living ones will immediately try to escape. They don’t scurry fast, but their movement is undoubtedly noticeable.

They will only sit in a place if they’re dead, or at least close to dying. Even a digesting bed bug will try to escape when disturbed.

Do Dead Bed Bugs Shrivel Up?

The other way of telling whether a bed bug is dead is through its posture. When the bed bug dies, they begin to dry out. This changes the way they look.

The first sign is if the bed bug is on its back. If it is on their back, then the bed bug is definitely dead. A living bed bug would try to get onto its front again if it were ever flipped.

The next sign is that the bed bug is curled up. This also means that the bug is dead. Bugs and animals often curl up when they die. This is because of either final muscle contractions, or because they dry out.