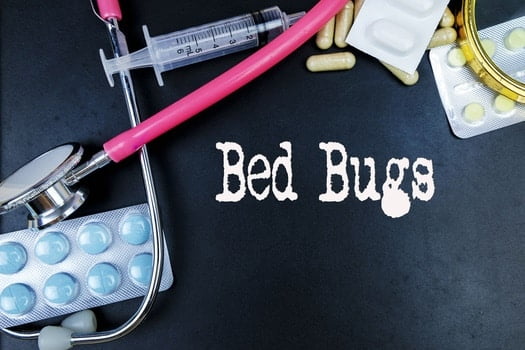 Borax is a white powder that’s used widely—in detergents, in cosmetics, and even in pottery. If you didn’t know, it’s commonly used to make laundry whiter and to make water softer. It isn’t harmful; it’s a naturally occurring mineral compound. Borax can be converted into boric acid, which has many more applications, again as a detergent but also as an insecticide.

Borax works through ingestion. Cockroaches eat it by accident when they clean themselves. Bed bugs can’t ingest borax because they only eat blood, and don’t preen. It’s ineffective as a treatment for bed bugs.

The problem is that people look for the easiest home remedies they can find. If borax really could kill bed bugs, that would be great—because it’s likely that you already have some lying around the house. And not only that, but it’s a proven insecticide. Unfortunately, while this does make sense to a degree, scientific studies say otherwise.

So, where does the idea come from that you can use boric acid to kill bed bugs? It’s already commonly used to kill other pests, roaches in particular. For borax or boric acid to kill a cockroach, they have to walk through it. It’s then thought that when the cockroach next preens itself, it will ingest small amounts of the powder, which is usually enough to kill it. And because cockroaches eat other dead cockroaches, the effect is passed on. It also works on contact, although to a lesser extent.

But the question is whether it works for bed bugs. And the answer is that no, it doesn’t. A paper in the Journal of Economic Entomology examined how effective boric acid is at killing bed bugs. They readily admitted that boric acid has an excellent kill rate for cockroaches. It causes rapid mortality at more than 2% concentration in a cockroach’s blood stream. Even at 0.5%, it causes 100% mortality, albeit more slowly.

However, they found that bed bugs can survive even high concentrations. It certainly doesn’t work when bed bugs ‘preen’ themselves, because that’s not a behavior that they engage in. Bed bugs can’t preen, so there’s no way that they can ingest borax that way. And even on contact, it doesn’t seem to harm them.

Of course, that doesn’t rule out the idea that borax can deter bed bugs in other ways. Bed bugs will avoid toxic things including tea tree oil, rubbing alcohol, etc. They’ll also make efforts to avoid borax. That means that it might still be useful, even if it isn’t the cure-all you might like.

No, boric acid won’t kill bed bug eggs. Again, its primary method of killing insects is through its toxicity when ingested. But adult bed bugs can’t ingest it, let alone their eggs, which means that it’s highly unlikely to have any effect. However, it should be made clear that the study above didn’t look at how effective boric acid would be in killing bed bug eggs.

Unfortunately, there are many people and sites on the net that claim that boric acid or borax work. This seems to be based on hearsay rather than fact. Of course, the idea comes from the fact that it does work on cockroaches, so the assumption is that it will work for bed bugs in the same way. Others claim that it ‘suffocates’ the bed bugs, which is bunk—bed bugs can survive in sealed, airtight plastic bags for longer than a year.

The truth of the matter is that everybody wants to think that their unique, DIY home-remedy method of killing bed bugs is the most effective. Unfortunately, not everything they suggest is going to work as well as the others.

Is Boric Acid Safe to Use?

Boric acid is generally safe to use, yes. It’s about as toxic as table salt, although that makes it sound a little safer than it is. For it to hurt you—even kill you—you’d have to eat about 7oz of the stuff. You would start to vomit before you could eat that much.

Fortunately, though, breathing in borax or boric acid fumes doesn’t have the same effect. By spreading it on your carpet or putting it in your laundry, you won’t come into contact with enough of the stuff to experience any side effects. However, it’s still best that you wash your hands after you use it, and that you avoid getting any in your eyes and mouth.

How to Use Boric Acid to Get Rid of Bed Bugs

While it won’t kill them, you can use brand name Borax to deter bed bugs. Start by placing it in powder form around every access point. That means around each leg of the bed, for example. To climb up from the floor, they’ve no choice but to walk through the borax. Even if it doesn’t kill them, they’re not likely to want to do that.

You can also use a liquid borax solution to repel bed bugs. Mix a strong solution in a spray bottle, before spraying on and around their harborages. Even if this doesn’t kill them, it will at least make the harborage less appealing for them. It should also overpower the scent they use to find their way home, meaning that they won’t recognize their harborage as a place to live anymore.

How to Remove Bed Bugs from Clothes with Borax

You don’t need to use borax when you’re washing clothes for it to kill bed bugs. Bed bugs are already susceptible to both the water and the heat in a washing machine, so much so that 100% of them will die during a long wash cycle.

There’s no need to add borax into the mix, because the bed bugs are guaranteed to die anyway. Perhaps it might hasten the process—but that doesn’t matter considering that even a thirty-minute wash will kill 100% of bed bugs.

Alternatives to Borax for Bed Bugs

Borax fails on two accounts. It’s not as good at deterring bed bugs as the alternatives are, and it’s certainly not as good at killing them, either. So what similar products can you buy to kill bed bugs? Are there any you can pick up from a regular store, and if so, how effective are they? Let’s find out.

How to Deter Bed Bugs

Diatomaceous earth is the most similar alternative to borax, but it’s different in that it works. It’s a highly effective deterrent and bed bug killer. Diatomaceous earth is a natural form of sedimentary rock, that’s easy to crumble. When crumbled, it becomes a soft white or off-white powder.

However, while it might feel soft to the touch, it’s anything but if you look at it through a microscope. The tiny particles it breaks down into are jagged and rough, which means that it’s found use as a mild abrasive used in polishes. However, it’s its use as an insecticide that’s interesting to us.

When a bed bug walks through diatomaceous earth, the tiny particles are rough enough that they scratch through the bug’s waxy outer shell. This outer shell is a special coating that they’ve developed, which stops them from losing moisture through evaporation.

Because they don’t drink, they need to preserve every tiny amount of water that they can, because they can only replace it through feeding. But when this layer peels away, the bed bugs very quickly start to lose their precious moisture. It evaporates away, and there’s nothing the bed bug can do. The effect is made even worse by the fact that diatomaceous earth is highly absorbent. This means they very quickly dry out and die.

This makes diatomaceous earth an excellent way of both killing and deterring bed bugs. If you place it in loose piles around the feet of your bed, they won’t be able to climb up to you without walking through it. And if you spread it over their harborage, they’ll pick some up any time they come home, too. Over time, this will kill almost every single bed bug (although it can’t kill their eggs).

Use a Mattress Encasement

Bed bugs can’t get in there to hide. Of course, they can still live elsewhere in your home: under furniture, in the bed frame, even in walls and outlets. But with a mattress encasement, you’ll likely see a large reduction in the number of bites you experience each night, straight away.

How to Kill Bed Bugs

Tea tree oil is more effective at killing bed bugs. It works on contact, unlike borax. Since tea tree oil doesn’t come in powder form, you have to make a spray out of it for it to work. Since it kills on direct contact, flip the mattress and start spraying any bed bugs you see.

It might have surprised you to learn that tea tree oil is toxic to bed bugs. Essential oils can be antibacterial, fungicidal and insecticidal. And that isn’t something that people say to sell the stuff; it’s backed up by real scientific studies.

One in the journal Insects (one of the most reputable in the field) examined the efficacy of several essential oil based pesticides, specifically in managing bed bugs. They found that products like EcoRaider and Temprid SC had a roughly 90% kill rate. As a stand-alone solution, they managed to eliminate bed bugs from 22% of apartments in the study.

This isn’t the best rate you’ll find. However, the study was time-controlled. They only followed the progress of the apartments for 12 weeks. With repeated applications, it’s highly likely that the essential oils would have had a higher kill rate. Not only that, but essential oils are completely safe (provided that you don’t have pets). This makes them an excellent alternative to poisonous pesticides, many of which bed bugs have an immunity to anyway.