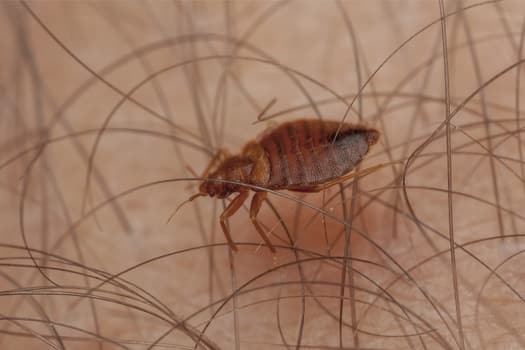 Bed bugs have to bite people to survive. But they go through several stages before they reach adulthood, like other insects. This raises the question of whether they bite throughout their life, or just once they mature at a certain age.

Bed bugs start biting soon after they hatch, and are about 1/20th of an inch long. They bite throughout their juvenile stages, and continue biting when they’re adults too. They won’t stop until they die.

Bed bugs eat nothing but blood throughout their life. The only stage they go through where they don’t feed on their host is when they’re eggs. On the plus side, only adults can mate. So, even if your infestation is biting, that doesn’t necessarily mean that it’s growing.

How Big are Bed Bugs When They Start Biting?

Bed bugs bite from the earliest moments of their life. They’re born to feed on nothing but blood, so as soon as they’re hungry, they’ll bite you. This takes three days or so after hatching.

The only difference between stages is that smaller bed bugs don’t require as large a meal.  But rest assured—they bite.

Bed bugs begin to bite from the earliest stages of their life. While the bed bug is still in their egg, of course, they can’t bite. But from the moment they hatch, they’re hungry.

Bed bug nymphs, as the youngest bed bugs are known, need to feed on blood like adults. They will feed within the first few days of hatching.

Once they’ve fed, they can then start to grow. They use the nutrients in the blood (which is nutrient dense) to grow quickly. A nymph will only bite once before it grows to the next stage.

Bed bugs go through several stages called instars. As it developed through each stage, it becomes bigger each time. It has to feed each time it wants to grow to the next stage. It will shed its shell as part of the process.

Bed bugs have five instars. They start as eggs, hatch as first instar bed bugs, and then go through the second, third, fourth and fifth stages. After the fifth stage, they become an adult. They feed each time they progress.

That means that bed bugs have to feed exactly five times to become adults. They’ll feed once every two or three days to achieve that. According to a paper in BMC Biology, last instar females are roughly the same size as adults.

Bed bug adults continue to bite frequently, just like juveniles do. They will feed roughly once every two to three days.

They don’t need to continue shedding their shell, like juveniles. But they still need blood meals. They don’t get food from anywhere else, so without blood, they would starve to death. This takes a few months at room temperature.

Feeding frequency depends on the temperature. In comfortable or high temperatures, bed bugs will feed every two to three days. In cold weather, they feed far less frequently, perhaps once a week. That’s because their metabolism is slower.

Adult bed bugs are between 5 and 7mm long.

Bed bug males and females are slightly different sizes. It’s the females who are slightly bigger than the males. They’re around 0.5 or 1 mm or longer.

Females also differ in that their abdomen (rear section) is wider across and more rounded at the end. The male’s abdomen has a pointed tip.

As for their biting habits, males and females are the same. They both feed on average every two or three days.

Females have to feed to produce eggs continually. She uses the nutrients she gets from blood to produce one egg at a time.

She’ll lay around an egg per day for several weeks after mating, but only if she has access to blood meals. During this time, she’ll feed regularly every two or three days.

Males also need to keep feeding to produce sperm. Each male tries to mate as much as possible. The loss of fluids through sex means that he needs to keep feeding regularly.

Do Bed Bugs Ever Stop Biting?

At no point in their lives will bed bugs ever stop biting, since they rely on blood for mating and sustaining themselves.

Once bed bugs get old enough, they stop moving around so much. It’s at this point that they’ll stop biting. They’ll die soon after. This usually occurs after two or three months, which is the natural lifespan of a bed bug.

Bed bug bites are variable in size. They’re about as wide as a pea, although they don’t swell up to that size.

They’re actually biologically similar to mosquito bites, too. Mosquito bites cause an allergic reaction, because they inject a small amount of saliva to numb the bite wound at first. Bed bugs do the same, and cause the same reaction.

Do Bed Bugs Get Bigger When They Bite?

Bed bugs feed for up to ten minutes to completely engorge themselves. As you can imagine they, therefore, swell up and become bigger to accommodate their meal.

The bed bug’s abdomen has eleven individual segments, in a horizontal stripe formation. These segments are for more than just show. When they feed, each segment expands to become longer.

Over the ten minutes they feed, their abdomen increasingly lengthens until it doubles or even triples in size. This makes them ungainly and vulnerable. They seek out a secure, safe harborage to digest.

As they use the nutrients in their meal, they shrink down again. Afterward, they’ll excrete anything they don’t need. Then the process begins again.

How Big are Bed Bugs to The Human Eye?

Adult bed bugs are easily visible with the naked eye, unlike other smaller pests. Adults are apple seed-sized. You can spot them very easily if you know where to look.

The reason for the misconception is that bed bugs hide. They seek out cracks and crevices (harborages) where they can hide from predators/threats and avoid detection. That’s why people think bed bugs aren’t visible to the human eye.

So while they are visible to the naked eye, they often hide to make themselves ‘invisible.’

Can You See Bed Bugs When They Bite You?

While bed bugs are big enough to see, the issue is that they bite when you’re not looking. Bed bugs wait until the dead of night, between 1 am, and 5 am, to feed. It’s during this time that you’re in your deepest stages of sleep.

Because you’re so soundly asleep, a bed bug’s bite won’t wake you up. They even use a special chemical in their saliva which they inject in the bite site, so you don’t feel it and wake up.

However, if you were awake at this time, then you would be able to see them feeding. They look for an empty patch of skin, and then sit in place for up to ten minutes. They would be easy to see, even feel, at this point.