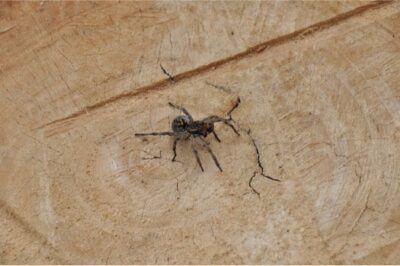 When a bug bites you, you want to know what bug bit you. Two of the worst are spiders and bed bugs. But telling spider and bed bug bites apart isn’t easy if you didn’t see them biting.

There are many similarities between bed bug and spider bites. When they bite you, each will leave an itchy red lump, but there are some easy ways to tell the difference between the two.

There are easy ways to tell the difference. Below is a table explaining each of them:

But despite there being so many differences, it can still be difficult to tell them apart. Here are each of the points in more detail.

When Do Spiders and Bed Bugs Bite?

They only bite if you’re threatening them and getting in their way. They could theoretically bite at night if you tried to roll over onto them. But this is unlikely.

In contrast, bed bugs only bite at night. They don’t bite for any reason other than feeding. They choose a time when you’re least likely to disturb them, i.e., when you’re asleep. You will wake up with these bites where there were none the night before.

While the lump may appear the same, the bite mark itself will not. That’s because bed bugs and spiders bite in different ways.

When a bed bug bites, it uses a specific tool like a straw. This is similar to how other blood-sucking insects feed. They don’t have fangs, teeth, or mouths like we do. They can’t leave a recognizable bite.

They use a tiny scraper to make a hole before inserting their straw to drink. According to the journal Clinical Infectious Diseases, the scraper and straw are folded underneath the bug’s body when not in use. They only unfold them to drink.

Spiders don’t have any of these tools in their mouthparts. All spiders have hollow fangs that they use to inject venom into their prey. When they bite, spiders use these fangs to defend themselves against you.

This is most noticeable after the bug bites you. The body’s reaction to the bite takes time to develop. Immediately after the bite, you will have two small red dots and nothing else.

These fangs are often big enough to leave a noticeable scar. So later on, the red lump will be the same, but it will have two fang marks in the middle of it. With bed bug bites, you may not even notice a mark in the middle of it—just a red spot.

Bed bug bites vary in size. That’s because bed bugs go through several life stages, during each of which they feed. The bigger the bug, the bigger the bite mark. However, the swelling won’t get much larger than a big pimple.

This swelling occurs because of the body’s histamine reaction. The body notices a foreign substance, either venom or saliva, in this case. It will swell up the area to allow more blood, and white blood cells, to reach it.

These bites don’t get bigger than a pimple. That’s because the bed bug doesn’t use much saliva to numb the area when it feeds. Even the biggest bed bugs don’t use enough to create large spots.

Spider bites can be much larger than that. That’s because spiders that bite are generally bigger than bed bugs. The bite marks these spiders leave behind can be as big as your knuckle.

If that’s how big the bite is, it’s a spider, not a bed bug.

While spider bites are generally bigger, they differ in size, shape, and amount of swelling. They certainly vary more than bed bug bites, which are relatively consistent.

This difference is down to the number of spider species there are. There are tens of thousands of different kinds of spider. All have venom and can many can bite. Some are as big as your hand, others as big as your fingernail, and others much smaller.

Bed bug bites don’t vary dramatically. They may slightly vary in size, because nymph bed bugs are smaller than adults. But there are only two main species that infest homes in the U.S.—not thousands.

As such, if you have several bites and they all look the same, they’re likely bed bug bites.

One key difference is that bed bug bites appear in clusters, while spider bites don’t. Bed bugs live in large aggregations called harborages. They hide in an inconspicuous place, such as under the mattress.

Because there are so many of them, many bed bugs may bite to feed at the same time. This causes a distinctive cluster of bites in one location, e.g., on your leg. They may also appear in a line.

There will only be one bite rather than a cluster if it was a spider.

Nevertheless, the venom can still cause damage even if it can’t hurt you. It will inflame the tissue around the bite site, and may make you feel woozy. This happens as the venom damages local tissue and gets into your bloodstream.

The brown recluse’s venom causes tissue loss and necrosis, for example. In the worst-case scenario, you could be bitten by a dangerous spider. The U.S. is home to several well-known species, including:

Bed bug bites only become a little inflamed, and have no further symptoms. The bite mark itself is small, which stops it from becoming too serious. Bed bugs don’t possess venom, only analgesic saliva, which is less serious.

So, if the bite is very large and swollen, it’s a spider bite.

Spider bite marks are larger than those of bed bugs. This leaves more open tissue that may become infected. This primarily occurs if you don’t properly dress the wound. Without antibacterial dressing, a bacteria or virus will enter the wound, even if small.

Also, the venom in the bite destroys nearby tissue. This makes the open wound larger, and makes it more difficult for your body to heal itself. This is made worse if you scratch the bite mark, as this continually reopens it and allows more bacteria in.

When a spider bite gets infected, it becomes even more large, red, and swollen. The center of it may appear bright red, like a wound that hasn’t scabbed over. The skin around the bite, for several inches, may change color.

It is possible for a bed bug bite to become infected. However, it’s unlikely. The bite mark left behind by the bed bug is small, and the body quickly plugs the gap. No bacteria can get in. The only exception is if you scratch the bite.

Even then, it’s unlikely that it will become infected unless you scratch so much that you break the skin. So, if the bite is infected badly, it’s probably a spider bite.

Spider bites can swell up alarmingly in size, and get infected more easily. This means that they are more painful than bed bug bites, too. This especially applies if:

The pain is made worse because of the spider’s venom. Regular swellings are painful because the skin is swollen. With a spider bite, you experience that, but also the damage to the tissue surrounding the bite. The venom makes it worse.

Bed bug bites aren’t as painful as spider bites. They will hurt if you prod and poke them. But more than anything, they’re itchy. As bed bugs don’t use venom, their bites don’t cause damage and pain in the surrounding tissue.

So, if the bite is severe and painful, it’s a spider bite, not a bed bug bite.

When a spider bites, it does so in self-defense. This could be because you moved towards it, or you were about to crush it while you slept. Whatever the case, they don’t repeatedly bite.

The group of bed bugs under your bed will feed every night. They need to, because they rely on you—their host—for their food. In warm weather, a bed bug will feed every other day. With a large infestation, you will get several bites per night.

This will continue until you treat your bed bug problem. They won’t go away on their own. If you get bites every night, the issue is bed bugs. If you have a large, one-off bite, it may be a spider.

Can’t Tell the Difference Between Bed Bug and Spider Bites

It’s understandable if you still can’t tell whether a bed bug or a spider has bitten you. Their bites are similar. You may have to search for the signs of the bugs, rather than look at the bites. Search for signs of bed bugs, like:

If you do find a bug, bag it and show it to a pest controller. They can tell you definitively if it’s a bed bug or not.

2 thoughts on “Spider vs. Bed Bug Bites (7 Easy Ways to Tell Them Apart!)”