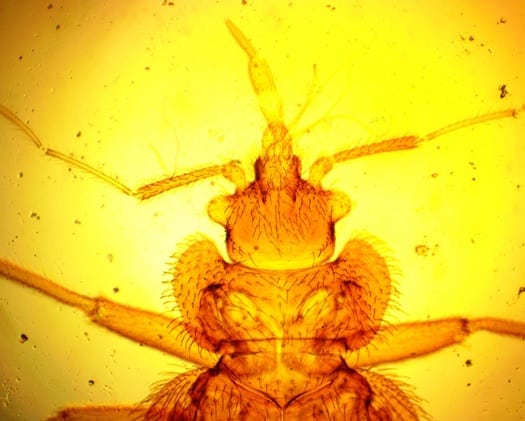 You’re lying in bed at night. Suddenly, you hear a buzzing and scuttling noise nearby. That would normally be a sign of a pest. But while we know what noise other pests make, hardly anyone knows what noise bed bugs make.

Bed bugs don’t make buzzing sounds, crackling sounds or squeaking sounds like other types of bugs do. This is because they need to stay hidden at all times. Making noise would give away their location.

The fact that you can’t hear bed bugs makes them much harder to find. If you’re on the hunt for an infestation, you’ll have to search for fecal staining, old shells, and the odor bed bugs produce.

Bed bugs don’t make any kind of buzzing sound because they don’t have wings. Their ancient ancestors, millions of years ago, used to be able to fly. We can tell because bed bugs have small vestigial muscles, tiny stumps, that used to control their wings.

The fact that they don’t have wings mean that they can’t make a buzzing sound.

The brown prionid makes a similar noise, as do lily beetles. These bugs sound almost like tiny mice, squeaking as they scurry along. Do bed bugs make a similar noise when they’re on their travels?

No, bed bugs do their best to stay silent when they want to feed. If they were to make noises as they sought you out, then you might wake up when you hear them. You can hardly even hear them walking around, since they’re so small.

Other bugs make a kind of crackling-buzzing sound. Katydids, the family that grasshoppers and crickets belong to, create a variety of noises. Crickets sound like they chirrup, almost like a bird. Grasshoppers make a buzzing sound virtually like a zap of electricity.

According to the journal PLoS One, cicadas create noise by rubbing their wings together, and a special organ called a tymbal that helps produce their unique sound. Bed bugs don’t have wings or a tymbal. Their noise sounds more like crackling, almost like a tiny siren or alarm.

Instead of using sound to communicate and find mates, bed bugs use pheromones. They find their way back home using pheromones, for example. They also give off an alarm pheromone when something threatens them, and they have to run away. But they don’t crackle.

Other bugs make a clicking sort of noise. You could call the noise of a cricket a clicking or chirping noise. Again, that noise is made when it rubs its legs together. But they’re not the only kind of bug that makes a clicking sound.

There’s a unique beetle called a click beetle. If it lands on its back, it can flip itself back over to its front. It pushes its back down to flick itself up to eight inches in the air, and lands on its front again.

Bed bugs don’t make a clicking sound. They don’t have a shell or the right kind of legs to click. They also don’t need to click or chirp. If they get stuck on their back, they struggle until they’re on their front again.

Do bed bugs make noise when they mate? They don’t—not hissing, chirping, or anything else. When bed bugs mate, the male overpowers the female and breaks through her exoskeleton. The sperm then finds its way through the bed bug’s equivalent of her bloodstream to find her eggs.

While this is unusual, the bed bugs themselves don’t make any noise during mating.

You can’t. Bed bugs hardly move during the day. In the daytime, they sit still and digest. If they feel like being active, they might mate, although they don’t make any noise then either.

Bed bugs are only very active at night. They feed at night, and have to travel (for them) a great distance to reach you. But you’ll be asleep at this time, so you can’t hear them anyway. If you’re awake, you’ll first notice them if they crawl on you.

They will also run as fast as they can if you disturb them. If you lift the mattress during the day, for example, they’ll move as fast as their legs can carry them. But you won’t hear them.

Do Bed Bugs Make a Noise?

Bed bugs don’t make any noise. They communicate with one another through smell. And they don’t frighten off predators with noise, either.

The only sounds that a bed bug might make are:

Aside from that, they don’t squeak or call out. If they’re threatened, they release pheromones instead, and try and get away from you as quickly as possible.

Bed bugs live their lives trying their best not to be found. If they were to make a lot of noise, then it would be easier for you to find them and squash them. They’ve learned over thousands of years that it’s better to stay quiet.

Besides, they can easily navigate their way through the world using their sense of smell. If they were able to call out to each other, it wouldn’t make them any better at avoiding threats or finding their way back home.

Imagine for a second that you’re a bed bug. Your only food source is your host, and they’re dead set on killing any bed bug that they find.

Instead of listening for them, you have to rely on other signs of bed bugs, such as:

These signs are obvious, especially if your infestation is quite large. If you do notice bed bugs, start treatment immediately, whether you can hear them or not.