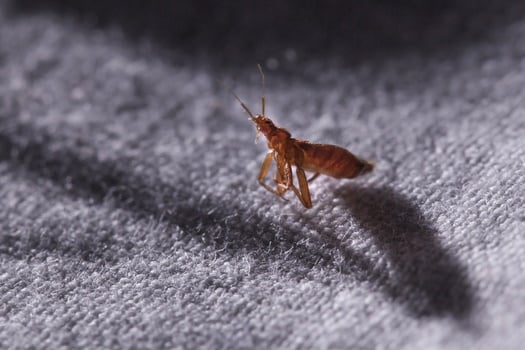 You can recognize a bed bug infestation due to the signs, such as fecal spotting, blood stains, and shed shells. But what you might not realize is that bed bugs have a distinct smell.

The odor of bed bugs is described as musty and sweet. It’s comparable to the smell of cilantro. Other people think they smell sweet like berries. People regularly disagree because the scent is subjective.

Bugs that give off odor have to cluster in large numbers for you to be able to smell them. You can expect to see other signs of infestation before you notice that they smell.

Can You Smell Bed Bugs?

Bed bugs are one of many bugs that give off odor. However, you might disagree with others as to what they smell like. People compare the smell to all sorts of different things, like mothballs, rotten wood and damp, and even raspberries.

Why Do Bed Bugs Have an Odor?

Bed bugs don’t just smell for no reason. They use their scent to help them navigate the world.

Bed bugs give off hormones like histamine to mark their harborages. You can find histamine in human urine. This helps them to find their way back home after they feed. Without these markers, they would struggle to find their way and would end up lost.

They also give off a separate scent when they’re frightened. When you lift the mattress, for example, the bed bugs underneath have to run and hide. So, when they come into contact with light, and the surface they’re on is moved around, they release a chemical signal.

It’s this chemical signal which is the most distinctive smell they produce.

How Do Bed Bugs Produce Scents?

Bed bugs are members of the insect order Hemiptera. Hemiptera is a significant classification of insects, which is also known as the ‘true bugs,’ all of which have sucking mouthparts.

Every member of this order has glands that they use to produce scents. In nymphs, these glands are located on their abdomen. In adult bed bugs, the glands are on their thorax, which is like their torso.

There are a few ways to describe the smell of bed bugs. Most people say that they smell like cilantro, the leaves of the coriander plant. You may also see it described as:

The issue is that smell is subjective. You can take a photo of a bed bug to confirm what it looks like. But there’s no way to check whether other people think bed bugs smell the same as you.

You might think that bed bugs smell like one of the above descriptions, or several of them. Whatever the case, it doesn’t matter so much because the smell isn’t the best way to identify bed bugs.

To spot an infestation, there are other signs:

Each of these signs is easier to spot than the scent of bed bugs.

People smell and taste cilantro in different ways. That’s why some people think it takes like soap, whereas others don’t. The difference is down to genetics.

Bed bugs might smell like cilantro to you or they might not. If you taste cilantro as a regular herb, then you’ll recognize the scent of bed bugs as being similar.

If cilantro tastes like soap to you, then bed bugs will smell different.

The smell of mothballs is like naphtha. It’s a kind of oil that’s distilled from coal. The smell is similar to gasoline. Bed bugs don’t smell like mothballs.

They can smell sweet in the same way that gas can smell sweet, but the smells aren’t comparable. The confusion might be from the fact that some people use mothballs to repel bed bugs.

Many pests smell like urine. Rats and mice have a distinctive scent which is similar. They leave behind droppings which add to the overall smell, which can be musty too.

Bed bugs don’t smell like urine, at least not urine straight after you go to the toilet. If you’re thinking of the smell of a soiled mattress, though, that smell isn’t dissimilar.

The smell of a soiled mattress is mustier, which is similar to the smell of bed bugs.

It depends on how the bed bug died. If you crushed the bed bug, there would be a variety of scents you might notice. The first will be the alarm pheromone they released, which smells like cilantro.

If they recently fed, and you squashed them, then you may also notice the smell of blood. The smell of blood is tangy and rusty. That’s because the oxygen and iron give it a unique smell.

If they haven’t finished digesting their food, that’s part of what you’ll smell.

Since bed bug feces is digested blood and nothing else, it does have a distinctive scent. You might notice that it smells a little rusty. However, it doesn’t smell like feces like humans.

You won’t necessarily notice this smell if there are just one or two stains. However, if there’s a significant build-up of feces, the odor will become much more apparent.

Bed bugs can find people just through their scent. They follow three signs which lead them to us:

If you want to spot an infestation before it gets any worse, trying to sniff it out yourself isn’t the way to do it. It’s far better to look for other signs.

But there is one animal that can detect the smell of bed bugs very well. Bed bug sniffer dogs are capable of sniffing out just one or two bed bugs. They’re trained to do so.

You can hire bed bug sniffer dogs for a nominal fee. However, be sure to try to detect the visual clues on your own first. We recommend that you search for old shells, fecal stains, bite marks, and harborages before you pay somebody to do it for you.