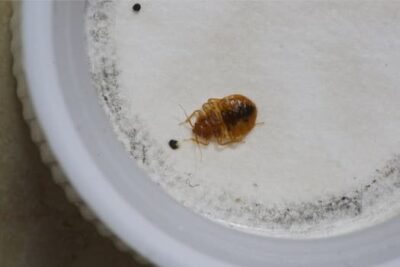 You may already know that bed bugs can survive even without a host. It’s true. And if you performed some basic research on online forums, you might also have learned that they can live for months, maybe even years, without feeding. But is this true?

Bed bugs feed once every 3-4 days on average. In cooler conditions, they can survive for longer than a year. But at room temperature, they are unlikely to survive for much longer than three months. Nymphs and young bed bugs starve within two weeks to a month.

You can force bed bugs to starve by fitting a mattress encasement. It stops the bed bugs inside from being able to access you at night, when they’re driven to feed.

How Often Do Bed Bugs Bite You?

Most people living with bed bugs will wake up with three or four bites in a row after a night’s sleep. In severe infestations, they’ll experience even more bites. But are those three bites just one hungry bed bug, or do they feed less frequently?

On average, bed bugs feed every three or four days. This is the time it takes for them to digest their food, before they get hungry again.

They eat far more than we do in terms of volume of food to body size. If you’ve ever seen a bed bug that’s just fed, they’re several times longer than an unfed bed bug.

However, bed bugs don’t eat on a regular schedule. They often need to feed more frequently than that, usually due to temperature changes.

If you notice that you get three bites every night, you’ve got several bed bugs infesting your mattress. The number could be anywhere between 5 and 20 bed bugs, depending on the temperature and how easy you are to access for them.

What Do Bed Bugs Like to Eat Other Than Blood?

Bed bugs cannot eat anything other than blood. Their mouthparts are specially shaped like a mosquito’s. They have one small scratcher, like a claw, on their chin.

It scratches away at the surface of your skin to make a hole. They have a longer tube that they insert into this hole to drink through.

However, they don’t have teeth or fangs, lips, and gums, or anything that they could use to break up food. They don’t need them, because they get all of their nutrients from blood. They don’t even eat crumbs or leftover food like cockroaches do.

The bed bug feeding schedule is closely linked to the bed bug lifecycle. The amount and frequency with which they feed depend on their age.

Bed bugs have a rigid aging process that every single bug goes through. It starts when the female bed bug lays her eggs. Those eggs take about a week to hatch. The nymph that hatches out then searches out a blood meal straight away, as it’s hungry.

Over the next month, the nymph will slowly get bigger. It goes through stages called ‘instars.’’It doesn’t change shape, but it gets bigger each time it sheds its shell. It has to feed to make itself grow. They’ll feed once every few days, and shed their shells in between each feeding.

Once it’s fully grown, it will continue feeding because it needs to mate. The females need to feed to produce eggs from the nutrients they get, and males need nutrients to create sperm too. Eventually, they slow down and die, typically from old age rather than predation.

How Long Will Bed Bugs Live Without a Human Host?

There are conflicting reports on how long, exactly, a bed bug can survive without a meal. Estimates range between six months and eighteen months.

The issue is that many scientists have studied the topic, and each has come back with different results. The instar of the bed bug determines how long they will survive, in addition to temperature.

According to the journal Insects, fifth instar and adult bed bugs survived the longest of all life stages. They survived for between 41 and 142 days. This is shorter than other studies have found.

The study examined several different strains of bed bugs, which are bed bugs from different parts of the world, and examined each strain at various life stages.

How Long Can Baby Bed Bugs Live Without Feeding?

Bed bugs in the first instar, i.e. ‘babies,’ were the most vulnerable to starvation. The scientists found that first instar bed bugs survived for between 13 and 36 days without a blood meal.

As the bed bugs got older, and progressed through their life stages, they could survive for much longer. Take one strain of bed bugs in the study as an example.

Their larger size meant that they had more nutrients in their system to draw from to prevent starvation. Adult females most likely survived for slightly less time because they were injured from repeated mating attempts.

Can You Starve Bed Bugs to Death?

You can starve bed bugs to death, although it might take you longer than you expect. The best way is to use a mattress encasement. These fit around your mattress, like a large plastic bag. They zip up so that no bed bug can get inside or out to feed.

The length of time it takes for them to die depends on the temperature in your home. If your room is regular room temperature, then adults will likely survive for between two and three months.

During this time, they will initially continue mating as they presumably fed recently. The females that mated within the past few weeks will also continue laying eggs for a short while.

But neither males nor females can carry on mating and laying eggs for long if they don’t have access to food. Blood meals are necessary to create eggs and sperm, after all.

However, it doesn’t particularly matter if it takes them a long time to die—even a year or more. The point of a mattress encasement is that you leave it on your mattress for months and years on end. There’s never any reason to take it off.

How Else Can You Starve Bed Bugs?

The problem is that bed bugs might not only be in your mattress. They might be elsewhere in your room, too. If they are, then there are a few ways you could starve them of their favorite meal.

Aside from that, there aren’t many ways to starve them. But there are ways to kill them. The best way is with commercial sprays, which don’t just repel bed bugs, but kill them. And they don’t just work on direct contact; they can repel and kill after spraying for several months.

Don’t try putting your mattress or bed frame in the garage. If you do that, the bed bugs will realize that they’ve lost their host, and start exploring and trying to find you. So, not only will they find you again, but they’ll probably spread around the rest of your house trying to search for you.

What Is the Average Lifespan of a Bed Bug?

Altogether, bed bugs go from egg to dead bed bug in between two and three months. The speed with which they grow old and die depends on the temperature and their ability to access food.

If it’s warm, they digest quicker, feed more often, and therefore grow more quickly. If it’s cold, everything is slowed down.

The difference isn’t slight. A bed bug in a warm climate will take two or three months to live and die. In a cold climate, that might be five months.

If they live somewhere that they don’t have access to food, and that’s cold (50 degrees or so), then they can survive for a year or more.

But as is frequently the case with bed bugs, your mileage may vary. The temperature of your apartment might be higher or lower than most.

Plus, there are two main species of bed bug that affect American households these days. Our native species live longer than tropical bed bugs, an ‘invader’ species.

You should seek to starve or kill the infestation. Bed bug infestations only get worse if you do nothing. So fit a mattress encasement, buy or make a bed bug spray, and get to work.