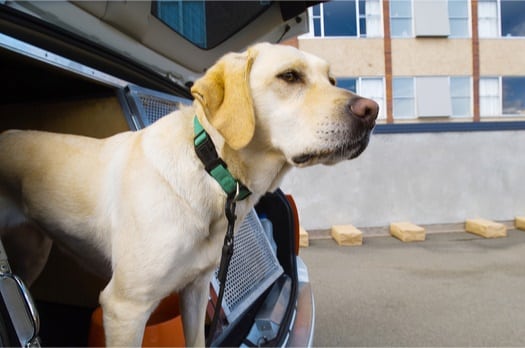 Bed bug dogs are the latest advance in finding and killing bed bugs. They use scent detection, and are employed by exterminators, block management companies, and private individuals to find infestations. Their widespread use should surely indicate that they work.

Scientific studies indicate that canine bed bug inspections aren’t always effective. They frequently fail to spot infestations, and flag up false positives too. They can occasionally mistake signs of old infestations, like feces and dead bugs, for a new infestation.

This is why it’s important to do your research. Many bed bug sniffer dog owners claim that their dog has a close to 100% success rate. But we’ll reveal the real truth of the matter.

Bed bugs produce lots of different scents, both intentionally and unintentionally. And many dog breeds have exceptionally sensitive senses of smell. It stands to reason that dogs should, therefore, be able to sniff out bed bugs, if trained properly.

What Do Bed Bug Dogs Smell?

Bed bugs use smells to navigate their way through the world. They use smell to find you, by sniffing out carbon dioxide and the scent of skin. But bed bugs also produce scents to communicate with one another, and to navigate.

This makes them vulnerable to being sniffed out. The kinds of smell that bed bugs create include:

If you can pick up on each of these scents, imagine how well a dog can. But the idea is to book an inspection before the infestation gets out of hand. When you’ve got hundreds of bed bugs under your mattress, you don’t need an inspection to tell you they’re there.

You want to hire a bed bug sniffer dog before you notice any of these smells.

There isn’t one breed that’s best for spotting bed bugs. The usual breeds are involved in sniffing out bed bugs. If you want to hire one, you can find:

Any dog can be trained to detect bed bugs, but some will always be better than others. Breeds that are good at following orders and understanding human cues will perform better.

The breeds above have been used to hunt and search for centuries. It’s only natural that they could be retrained and made able to search for bed bugs.

The point of bed bug dogs is that they can sniff out bed bugs in hidden places. This includes bed bugs hidden in plastic, fabric, and under furniture.

By their nature, bed bugs are secretive. They hide in the darkest, most secure spots they can, to ensure they aren’t killed or eaten. In order for the dog to find them, they have to be able to sniff them out while they’re hidden.

If you placed some bed bugs inside a sealed plastic container, a dog wouldn’t be able to smell them. Dogs can’t smell through things. But bed bugs crawl around, leave their droppings, and aren’t entirely enclosed anyway. That’s why dogs can smell them.

However, there wouldn’t be any point of hiring a dog if bed bugs crawled around in the open. If they did, you’d be able to see them. Bed bug dogs are best used when you haven’t spotted any yet.

Bed bugs hide as naturally as they breathe. It’s second nature to them. If they ever see a sliver of sunlight, they run in the opposite direction. And for a home, they pick out the darkest, most secluded places they can. These are places like:

So, strictly speaking, they don’t hide when they sense the dog coming. But they live in places where they’ll be difficult to find. This can make them close to undetectable.

The idea behind bed bug sniffer dogs is that they find infestations before they get too bad. After all, if you had hundreds of bed bugs in your bedding, you wouldn’t need a sniffer dog. You could lift the edge of your mattress and peer underneath.

This makes things more difficult for the dog. They’re looking for a needle in a haystack. However, a dog’s sense of smell is incredible. So, how accurate are bed bug sniffer dogs?

According to the Journal of Economic Entomology, most bed bug dog handlers believe their dogs to have a very high success rate. The average rate of detection, so the handlers thought, was 95%.

If this were true, it would be an exceptionally high standard.

The team behind the paper above sought to put their claims to the test. They started by identifying which apartments in a block had bed bugs. They used monitors (traps) and visual inspection to ascertain the presence and size of each infestation.

They then performed experiments in real-life settings to see how effectively the dogs could detect bed bugs. These experiments took place over many days, and in different conditions.

On the first day, the handlers were informed of which apartments had bed bugs. In the other tests, they weren’t.

However, the dogs were nowhere near as accurate as their handlers thought. The best score was 88% of infestations detected, recorded by one handler-and-dog team on the first day.

On average, the dogs only sniffed out 44% of infestations.

In the study above, the scientists figured out which apartments had bed bugs before the tests began. They did so by placing an average of 28 interceptor traps in each unit, and leaving them there for 14 days. If no bed bugs were found in the traps, visual inspections were performed.

Afterward, the apartments where false positives were made were examined again. That way, the team could rule out new infestations having begun.

The point of all this was to check how accurate the dogs were, both in terms of finding infestations that were there, and in terms of not flagging for false positives.

Bed bug sniffer dogs are frequently wrong. The study above highlights how false positives are frequent, and why.

That means that bed bug dogs failed in two different ways. They generally failed to detect bed bugs. If they didn’t, then they also had a terrible false positive rate.

The reason why false positives are so high is because of previous infestations. In many of the apartments where there were false positive results, there were old signs of bed bugs. These included dead bed bugs, old shells, and feces.

These signs confused the dogs, and made them think there was a present infestation.

It should be noted that other studies have had much more successful results. Another published in the Journal of Economic Entomology found that dogs could find 98% of infestations. However, these bed bug infestations were planted by the scientists themselves.

In the first paper, the bed bugs were already in the apartments, and weren’t planted by the authors of the study. The dog handlers didn’t know that they were actually taking part in a scientific test.

The results from the first paper are more likely to reflect the dogs’ real-world abilities.

How Much Does a Bed Bug Sniffing Dog Cost?

Consider both their price and their actual effectiveness. If you’re willing to look at real scientific studies rather than just advertisements and marketing, then it’s clear that they’re not as good as they claim.

Why Are Bed Bug Sniffer Dogs So Expensive?

Nothing comes cheap when you’re getting rid of bed bugs. Monitoring, identifying, and destroying infestations is always expensive no matter where you live.

With bed bug sniffing dogs, you have to consider what you’re paying for.

That being said, considering their poor efficacy, you could be forgiven for thinking that you’re being overcharged.

Bed bug sniffer dogs are typically handled by regular people, not exterminators. Their owners are dog trainers, typically, who see bed bug sniffing as a valuable sideline. And it is, if the average costs above are anything to go by.

Exterminators don’t use dogs—they use other methods instead. However, you may find an exterminator that knows a bed bug sniffer dog. You might be able to get a discount.

The reason is that training a dog to do anything, whether they’re a service dog or a sniffer dog, is tough work. Dogs are smart, but need lots of training to get them used to their ‘job.’ Exterminators don’t bother with that, relying on monitors instead.

That being said, you may be able to find an exterminator that works with a particular sniffer dog. Make a few phone calls and see if there are any in your area. You may be able to get a discount on booking both the dog and the treatment.

You can hire bed bug dogs through well-known pest control companies. These companies include Orkin, Ehrlich, and Terminix. Each of these companies offers a service whereby you hire a dog, and then if necessary, get treatment.

These dogs aren’t going to be any better or worse than the ones you hire privately. All bed bug sniffer dogs have the same problems with false positives and missed infestations.

You can also hire dogs through these companies as a part of follow-up service. This is to make sure the bed bugs don’t come back. The point is that the dog will find individual bed bugs, so that they don’t start a larger infestation.

How Do Exterminators Find Bed Bugs?

Exterminators usually use other means to check whether you have an infestation. These methods are cheaper and have a better success rate, which is why exterminators prefer them.

They usually use monitors, often lures, that give off carbon dioxide or similar pheromones to human skin. The bed bug will climb inside, and will get stuck. Lures use glue to stick the bed bugs in place.

Otherwise, they’re simple traps. They have walls that bed bugs can grip on, so that they can climb in. But the inside is slippery, and they can’t get out. This is known as a passive monitor, or an interceptor. They go around the feet of your bed.

Other than that, exterminators will visually inspect your home. They’ll use their experience—they know where infestations usually live. They’ll check all the usual places, plus unusual ones like power outlets and floorboard cracks.

Should You Hire a Bed Bug Sniffer Dog?

On the above evidence, we would suggest against hiring a bed bug sniffer dog.

Besides that, planted evidence isn’t going to be in a natural place. When studies are done on bed bugs in their natural setting, dogs aren’t as effective at finding them as their owners make out.

Bed bug sniffer dogs themselves are highly inconsistent. Some dogs perform excellently on one day, but then do terribly the next. And other dogs achieve much worse scores than other dogs do on average.

Plus, there are lots of alternatives that you should consider.

We would recommend sticking to these alternatives, rather than sniffer dogs. Below we’ve listed each option available to you, as well as the likely price and why you should use them.

Hunting bed bugs on your own is easy. You have to look for the signs.

Passive monitors and pesticide sprays are much cheaper than hiring a bed bug dog. Monitors only cost a few dollars. Sprays cost a little more, but each time you spray, the pesticides linger for weeks.

The best thing about monitors is that they do even more than a sniffer dog. A well-made monitor, especially one using glue or water well, will trap individual bed bugs you bring home before they get a chance to set up an infestation.