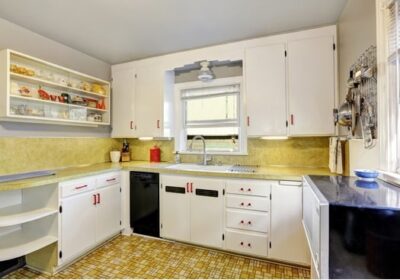 Pests have been plaguing kitchens and pantries for as long as we’ve had them. Bed bugs aren’t necessarily one of them, as they prefer the bedroom, but it is possible.

Bed bugs can live in the kitchen, but only if the infestation is very large. Bed bugs prefer bedrooms. If they are in the kitchen, they may live in kitchen cupboards, cabinets, tables, and walls.

It’s far more likely bugs that look like bed bugs in the kitchen rather than bed bugs themselves. We explain where bed bugs can live in kitchens, what attracts bed bugs, and how to kill them.

Do Bed Bugs Live in Kitchens?

When a bed bug picks a place to live, there are several considerations.

They require proximity to a host. They need to easily get from their hiding place, to the place that you can sleep. At the least, they need somewhere that you sit down for long periods of time. Preferably, they would be within six feet of where you sleep.

They also require somewhere that’s hidden. Bed bugs are photophobic, which means they don’t like the light. If they see the light, they quickly scatter and hide. That’s because the sunlight leaves them exposed, easy to find and squash. So, they prefer tight, dark, hidden spaces.

Your kitchen likely doesn’t meet these criteria. While there will be lots of hidden spaces, there will be nowhere for the bed bugs to feed. Ease of feeding is the main criteria by which they choose their hiding places.

That being said, it is possible for them to live in kitchens. According to PLoS One, a high percentage of bed bugs don’t live in beds, and travel extensively around the home. This can be proven with interceptor traps.

Some apartments and houses are so badly infested that there’s no room left in the bedroom. When this occurs, the bed bugs look for other hiding places elsewhere in the home. In this scenario, they may pick the kitchen.

There’s also the possibility that the kitchen and the bedroom share a wall. If the bed bugs get into the wall, e.g., through a crack, then some may nest inside the kitchen. But this scenario is unlikely.

Kitchen cupboards do tick two boxes: they are enclosed spaces that are usually dark. When selecting a new harborage (hiding place), bed bugs look for the colors red, brown and black, as this indicates darkness.

Also, if they’re cupboards, drawers or cabinets that you don’t use often, then they aren’t frequently disturbed. When you disturb bed bugs with light, they scatter. The less you open the drawer, the more time they have to live there.

However, you’re still unlikely to find any bed bugs in kitchen cabinets. That’s because they’re too far from their host, i.e., you.

Bed bugs have been known to live in appliances and electronics. One thing they like is warmth. Warmth allows them to digest, mate, and grow quicker. It speeds up their metabolism.

They also like dark cracks and crevices. Plenty of these on offer both inside and behind your kitchen appliances. Again, you’re unlikely to find here as your kitchen is too far from your bedroom.

Do Bed Bugs Live Under the Kitchen Table?

The kitchen table is somewhere more likely for them to live, at least more likely than a kitchen cupboard. Bed bugs like living in furniture because:

You can even make the table more inviting for bed bugs by covering it with a cloth. This would make the space underneath the table even darker, and therefore better for bed bugs.

Even so, you’re unlikely to find bed bugs here except in the worst infestations.

If you have a combined dining room and kitchen, you’ll have a dining table and chairs. As we explained, the kitchen table is a possible target. The chairs, though, are more so.

The chairs offer lots of joins, cracks and hiding places, plus a dark area underneath. But they also offer something the kitchen table doesn’t: fabric and seams. Bed bugs like to live on fabrics, and usually do on your mattress.

If your kitchen chairs have padding and seams, the bed bugs may live in them. But another factor is your close presence. As you sit down to eat, the bed bugs get a chance to feed. When they can’t feed at night, desperate bed bugs try to feed in the day.

Again, though, this scenario is unlikely unless you have a very large infestation already.

Bed bugs only feed on blood. They prefer the blood of a person, but can feed on the blood of other mammals if necessary. So, unlike other pests, food and food waste don’t attract them.

They also prefer staying close to a host, especially at night when they usually feed. They will pick your bedroom over anywhere else. Failing that, they will pick places you sit for a long time and may nap, like chairs and couches.

The kitchen isn’t somewhere you stay for a long time. And when you do, e.g., when cooking, you’re moving too much for them to feed on.

Many pests will infest your kitchen. Some of them look more like bed bugs than others. Once you learn about them, it’s easy to tell the difference. Here are a few bugs you can find in your kitchen.

Cockroaches are one of the most common pests in apartments and houses. They particularly love to live in kitchens. You could mistake roaches for bed bugs, but only if you didn’t know what each bug looks like.

Cockroaches are much bigger than bed bugs. While bed bugs are the size of an apple seed, cockroaches are on average 1 ½ inches long. They can get even longer (up to three inches).

Also, most species are the same color as bed bugs, a mid-brown. But some cockroach species are pure black. Other differences include:

Weevils are much more similar to bed bugs than cockroaches are. And, again, they spend most of their time in the kitchen.

Weevils are beetles with a big abdomen, six legs, and a small head compared to their body. They’re usually light to dark brown color, and vary in size from smaller than a grain of rice to 1/5 of an inch. That’s roughly the size of bed bug nymphs (the former) and bed bug adults (the latter).

However, there are easy-to-spot differences between bed bugs and weevils.

If you spot weevils in your food, throw away the infested food and have the room treated.

Larder beetles, as the name suggests, live in larders. They are scavenger beetles, and feed on scrap foods, just like cockroaches. They look similar in a way to bed bugs, in that they have long abdomens and small heads, and six thin legs.

The main difference is in the pattern. Larder beetles are dark brown or black all over. However, they have a light, wood-brown stripe horizontal across their middle. This stripe has small black spots in it, three on each side of their shell.

If you’ve found something that you think may be a bed bug, bag it up. Do your best not to squeeze and squash the bug. Use a clear bag, the kind you can keep food in.

This is good advice whether the bed bug is alive or dead. You can pass the bug on to an expert pest controller. They will be able to identify the bug and tell you whether it’s a bed bug or not.

You may also need the bug to prove your infestation. If the landlord doesn’t believe there are bed bugs, for example, the dead bug will be evidence. You may also need to pass the bug on to whoever’s in charge of your apartment block to prove there’s a problem, too.

How to Get Rid of Bed Bugs in Kitchen

If by chance you do have bed bugs in your kitchen, getting rid of them is difficult. Bed bugs are notorious for being hard to kill, and for good reason. That’s especially the case if you try DIY methods to kill bed bugs.

Let’s take a look at the pros and cons of each bed bug treatment method, and how they apply to killing bed bugs in your kitchen.

Hire a Pest Controller to Kill Bed Bugs in Kitchen

Exterminators have used insecticides for more than a century to control pests. The most common bed bug pesticide is permethrin. It kills on contact, but bed bugs are good at hiding. So, it takes time for them all to come into contact with it.

It would be a bad idea for you to use pesticides in your kitchen. Permethrin is generally safe, unless you ingest large quantities of it. You should avoid spraying it anywhere that you’ll be eating or preparing food.

The other method is heat treatment. This works far quicker. The exterminator will use a special fan to raise temperatures in your home to 140 degrees or more. Bed bugs need to reach 122 degrees to die within minutes.

Heat treatment would be a quicker and safer option for bed bugs in a kitchen.

DIY bed bug treatment methods aren’t as effective as a pest controller, but do still kill bed bugs. There are both natural and synthetic DIY treatment methods. Many suggested by online blogs are ineffective. These are three that work, to an extent:

Using baking soda is one tip commonly given, but it doesn’t work at all. Overall, though, even the three methods above aren’t as effective as hiring an exterminator.

Whether you’ve found bed bugs or not, the treatment method will be the same. Contact a pest controller and see what they can do for you.

1 thought on “Can Bed Bugs Infest a Kitchen?”