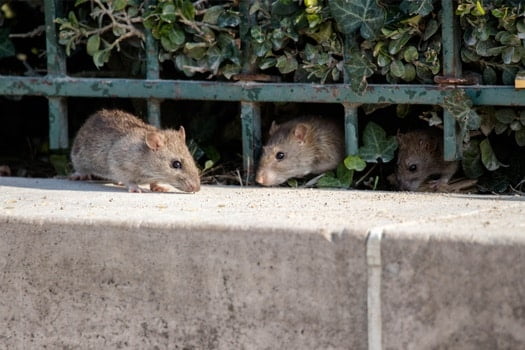 You can experience both rodent and bed bug infestations at the same time. Mice and rats infest any home where they’ll have food, water, and warmth. They can live anywhere in the home, but will congregate near their food source, the kitchen. They live in areas where you can’t see them.

Rodents don’t bring in bed bugs (Cimex lectularius) because they only live indoors. They don’t live on their hosts, but near them, so they can’t be carried in by vermin. Mice and rats also don’t attract bed bugs. Bed bugs will feed on rodents as they would rather feed on human blood.

Mice and bed bugs don’t interact as much as you might expect. Rodents don’t cause bed bugs. But that doesn’t mean you shouldn’t look for a bed bug treatment to kill them ASAP.

Mice and rats are well-known carriers of diseases and pests. The Black Death is the most famous example. It was caused by pests that black rats carried from Asia on board sailing ships.

Rodents are also renowned for tracking bacteria on clean surfaces. That’s because they live in unclean places and feed on unclean things.

You can imagine, then, that they would encounter other pests like bed bugs on their travels. However, rodents don’t spread bed bugs, and here’s why.

Do Bed Bugs Come from Outside?

Bed bugs are an indoor pest. They cannot survive outside for long enough to set up a permanent population.

They evolved from a bug that developed to live a sheltered life in caves. They can’t fly to escape from predators, and they can’t scuttle fast. They also have trouble walking over natural terrains like grass, because their feet have trouble gripping.

Worse still is that bed bugs are highly susceptible to water. They can’t swim whatsoever, and readily drown in a small amount of water. This makes the outdoors highly hazardous for a bed bug.

They also die in relatively normal temperatures. At 122 degrees, they start to die off, which is an uncommon temperature. But it’s regular cold that they can’t stand: even normal winters are too much for them. This means that mice and rats won’t catch bed bugs outside.

Pest mice in your home don’t explore all that much. They’re attracted to your home because it offers:

Anywhere they have access to all three of these things, they’ll set up their nest. They pick places that they can ensure they have everything they need to live. With these things in place, they don’t need to go exploring.

That’s why mice stay within thirty feet of their nest throughout most of their lives. They prefer the safety of your home. So, even if they could find bed bugs elsewhere, they’re unlikely to pick them up and ‘carry’ them to your home.

Because of these two factors, it’s impossible that rodents can bring bed bugs into your property. However, that doesn’t mean that rodents can’t attract bed bugs to your home when they’re already there.

So, mice can’t carry bed bugs in from outside. But what about if they picked up bed bugs at someone else’s apartment/house and brought them to you? Do mice cause bed bugs that way?

Bed bugs don’t live on their host like other pests do. Instead, they live near their host, and head out of their hiding place to feed at night.

This is partly to do with their safety. Bed bugs feed on bigger animals that could easily squash them, on purpose or by accident. Any bed bugs that tried to would quickly die and couldn’t breed.

Instead, it’s the bed bugs that hide near their host, but not on them, which survived. These bugs are experts at hiding in cracks and crevices. Here, they can’t be squashed or eaten by their host or anything else.

Bed bugs account for the time that their host is away by surviving long periods without eating. Bed bugs are capable of surviving for a year or more in the right conditions without a host. When the host returns, they will feed and breed again as usual.

Also, bed bugs are physically incapable of clinging to their host. Their legs can’t grip on skin or hair easily. They’re too big to live on your scalp in between hairs like other pests. Instead, they’re the perfect shape for hiding in cracks in walls or furniture.

They also feed in a different way to ticks, a similar blood-feeding bug. Ticks burrow their head into the host’s skin. This means they stay in place even if the animal tries to scratch them away.

Bed bugs feed while the host is sleeping, so the host won’t move or disturb them. They make a small hole in the skin into which they stick their feeding straw (like a mosquito). Five to ten minutes later, they finish feeding and head back to their harborage.

This means that bed bugs can’t cling onto rodents and enter your home that way. Instead, the origin of all bed bug infestations is from other people or other peoples’ homes. The bed bugs hitch a ride in belongings, like a bag or a scarf.

When they get to a new location, they hide somewhere and set up a new infestation. If the bug is a female, and has previously mated, she can lay dozens of eggs. They will start feeding immediately.

Bed Bugs are Too Big to Carry

When you think of the kind of pests that animals carry, you think of small ones. Fleas and lice are the best examples. They are small enough that they can hide in fur or hair. The animal can’t easily find them to scratch or squash them.

This is impossible with bed bugs. Bed bugs are the size of an apple seed, which means they’re easy to spot. Their body shape is awkward for climbing between hairs, so this isn’t possible either.

This means that even if a bed bug did try to hold onto a rat, it wouldn’t physically can’t. So, no, mice and rats can’t carry bed bugs into your home.

Bed bugs don’t like being around their host, or any other animal, for an extended period of time. They’re rightly worried that they could be squashed and killed.

This means that they don’t hang around when they’re done with feeding. They’ll head straight back to their harborage to digest. There’s no chance that the host could wake up and walk around with the bed bug still on them.

You can see this for yourself if you disturb the bed bugs’ harborage. When you lift the mattress, the bugs will scuttle to get away from you as quickly as they can. They won’t sense you there and come to feed.

The same applies to any other host. As soon as they notice the host moving, they will scatter.

It’s a known fact that mice and rats attract other mice and rats. If you see one, it’s a sure sign that there are more nearby. That’s because:

What Are Bed Bugs Attracted To?

Bed bugs are attracted to an area by three things. These are heat, carbon dioxide/CO2, and the smell of a person.

But do rats cause bed bugs by attracting them? It’s likely that they don’t.

By tracking these three things, bed bugs can find their way to a new host. While rodents are mammals and give off both heat and CO2, they don’t give off much. Humans create far more warmth and CO2 through breathing, so we are far more ‘attractive.’

Do Bed Bugs Feed on Mice and Rats?

While they are much smaller, and look different to us, rodents are still mammals. Bed bugs can feed on any mammal, not just people. Rodent blood is similar in composition to our blood.

This betrays the evolutionary origins of bed bugs. They are evolved from a kind of bug that feeds on bats. These bugs looked much the same as today’s bed bugs, and fed in the same way. They hide in the cracks in the walls of caves to feed.

Modern bed bugs can feed on other mammals, too. This is one way in which infestations survive even in the absence of humans. If you have lots of bed bug bites, you may notice that your cats or dogs do too.

However, bed bugs won’t be attracted to a home because of mice and rats in there. Rodents don’t attract them, even if they could theoretically feed on them.

Do Mice Feed on Bed Bugs?

Mice are omnivorous. While they do eat cheese, as their reputation suggests, that isn’t all they eat.

They tend to concentrate on dense, nutritious foods like fruits, seeds, and grains. That’s why mice are so common in farmland and around granaries. These foods allow them to meet their nutritional needs with little effort.

Do mice eat bed bugs? They will eat insects if they find them. In the wild, that might mean grasshoppers, caterpillars, small beetles, and similar. These bugs are likely to be nearby where mice live, in grasslands or near human-inhabited areas.

However, there are good reasons why they won’t feed on bed bugs.

If you had a pet mouse, and offered it a bed bug, it may eat it. But pest mice can’t reliably feed on bed bugs. They wouldn’t infest a house solely because there were bed bugs there.

Everything that applies to mice, applies to rats too. Rats are opportunistic scavengers. They eat leftover food from the trash, for example. But they do also eat insects if they can find them.

Again, the things that prevent mice from eating bed bugs also prevent rats. There’s no easy way for them to access bed bugs as a food source. If they wanted to eat some, they would have to get too close to you for comfort.

Bed bugs and rodents don’t attract one another. If you have an infestation of either, contact a pest control specialist. Only an expert can get rid of bed bugs quickly.